UO / Economics / EC 202 / What are the features of the aggregate production function?

Description: Here are the notes for the third week of class.

What are the theories of growth?

*Outline on canvas of some key points

○ Over the last 100 years, the growth rate of U.S. GDP per person was about 2%. ○ Obviously this fluctuated over specific periods in the 100 years

○ Some of the richer countries are like the U.S.: about 2%

○ Even though most countries have had a positive growth rate, because of the difference in growth rate, their standard of living relative to the U.S. has fallen. ● Recall: Real GDP can increase for two reasons

When does labor productivity changes?

■ Only increases in potential GDP are termed “economic growth”

● Potential GDP: the sustainable level of output an economy can produce, and is influenced by many things: Don't forget about the age old question of What are the types of fossilization that we covered and how do they work?

■ *all fixed in short run

■ An aggregate production function (how much produced)

When does labor supply change?

○ Attempts to formally describe some aspect of the real world

○ Simplifies as much as possible, while still capturing the most important features of reality

○ A description of the relationship between real GDP and quantity of hours worked. For simplicity, we ignore the fact that there are many different types of work.Don't forget about the age old question of What is a nuclear family and how common is it today?
If you want to learn more check out What is a fossil record?

● There are decreasing returns to scale in labor: each additional hour of hour of work increases real GDP less than the previous hour did ● Starting at 0 and increases in a diminishing marginal return rate ○ Aggregate Labor Market: describes the supply and demand for labor in the economy

■ The real wage individuals receive the price of labor

● Nominal: the wage you are paid in terms of dollars

● Real: the wage you are paid in terms of purchasing power

● It matters what the real wage rate is

● Law of Supply: as the real wage increases, people are willing to work more hours

○ Equilibrium in the Labor Market

■ At the intersection of supply and demand

■ There’s no pressure for the real wage to change

■ Equilibrium real wages is too high

● There will be a surplus of labor

● There is pressure for the real wage to fall

● Will bring it back to equilibrium

■ Equilibrium real wage is too low

● There will be a shortage of labor

● There is pressure for the real wage to rise

● Will bring it back to equilibrium

○ Movement along the production function Don't forget about the age old question of Who is one of the 1st hired and the 1st hired in the fsa?

● If worker productivity increases, then firms will want to hire more

workers at any wage

● This causes a shift right in the labor demand function

○ Effect of an increase in labor productivity on potential GDP

■ There is a shift in the production function upwards

■ Because productivity is higher, the labor demand curve shifts to the right ■ The shift in labor demand increases equilibrium real wage and the full employment level of hours worked

● Global warming/climate changeWe also discuss several other topics like Why is journalism special?

○ Neoclassical (Solo model): the view that real GDP per person grows because of increases physical capital per person

● Because there are diminishing returns to capital, eventually capital

● At that point the economy no longer grows, but it also does not fall

Prediction: growth will eventually stop, individual standards of living will not fall ○ New: holds that real GDP per person grows because:

● Technological improvements are a public good (can be enjoyed by

● Knowledge is not subject to diminishing returns

Prediction: growth can potentially continue forever, and individual standards of living will continue to rise 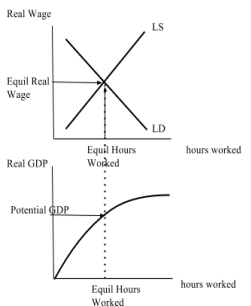 GDP if there is an increase in

GDP if there is a decrease in

GDP if there is an increase in

GDP if there is a decrease in

○ There is a plague that wipes out have the US population. Draw the affect this has on the labor supply and label the new equilibrium.

■ A shift left in the labor supply curve.

■ Because the labor supply curve shifted to the left, it is a shortage.

■ MAKE SURE TO LABEL CORRECTLY!

○ Steps for the shift in the graphs:

■ Start at equilibrium (part A)

■ Plague reduces population, so labor force decreases; this shifts the labor supply curve to the left.

■ With reduced hours worked, production falls and so does potential GDP. ● When labor productivity changes:

○ Steps for the shift in the graphs:

■ Start at equilibrium (part A)

● Income: the quantity of wage and other income that people receive per unit time ● Wealth: the value of all the things that people own at a given time

● Saving: the amount of income that is not paid in taxes or spent on consumption goods and services, per unit time

○ Interest rate: the interest received expressed as a percentage of the loan amount= (interest/loan amount) *100

What do you do if you have developed a new polymer?