Description: These notes cover the learning objectives presented in Unit 1A.

∙ Science- derives from the Latin scientia meaning to know.  Science is a consistent body of knowledge about matter and  energy, including the methods by which this knowledge is  obtained and the criteria by which its truths are tested.

o Science mainly relies on observations of nature, which  are statements of high standards, composed in the  precise language used in a particular science.

o Observations of nature are obtained through

∙ Scientific Method- a system of securing and testing scientific  knowledge described in a series of steps.

what is Scientific Laws?

observations of nature relevant to the problem

they are investigating through experimenting,

2. Explain information with a hypothesis:

phenomena with a hypothesis

3. Test the hypothesis with experiments

∙ Hypothesis- a preliminary explanation for a phenomenon  that may or may not be supported by further observations or experiments. Uses human induction and data.

o Induction- when our minds put together bits and pieces  of information and uncover new lines of thought.

∙ Scientific Laws- statements or mathematical relations  founded on extensive observations of nature. These  observations have clearly demonstrated that the scientific  laws are always true, under certain conditions

what is Electromagnetic Radiation?

o Example: Boyle’s law states that the volume of a given  amount of gas at a fixed temperature decreases as the  pressure on it increases. This law applies under normal  conditions on earth but may not on other planets. We also discuss several other topics like rlc circuit laplace

o Often, radical results, ones that question our

fundamental theories and paradigms, are the result of  experimental errors

∙ Paradigms- it is basically an example, and consists of  scientific laws, diagrams that give insight into the laws, and  a group of calculations and solved problems that everyone  agrees are done correctly. Don't forget about the age old question of consumers confront a barrage of marketing messages each day. banner ads on websites, billboards, and print media are some of the agents through which these messages are communicated to the consumers. however, most consumers "see" only a few of these messa

∙ In order from least certain to most certain: Hypotheses  (least), Theories, Scientific Laws (most)

∙ Electromagnetic Radiation- waves of a given wavelength (λ) with a certain energy traveling at the speed of light (c). ∙ The more energy an electromagnetic wave has, the shorter  the wavelength.

∙ The approximate wavelength of red light is 780-622 nm  (nanometers)

∙ The approximate wavelength of blue light is 492-455 nm

∙ One of the most important interactions in astronomy is  between Electromagnetic Radiation (photons) and individual  atoms.  Don't forget about the age old question of bio 203 exam 1

∙ This interaction is the absorption of photons by atoms. The  atom absorbs the energy of the photon of EMR and this  causes electrons in atoms to move further away from the  nucleus of the atom into outer orbitals. (Remember it like  this: absorption, away)

∙ Emission – As the electron that has been removed from one orbital moves towards the center of another, it then emits  and causes a photon to move further away from the nucleus  of the atom into outer orbitals. 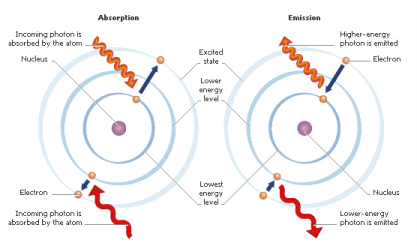 Learning Objectives: TelescopesIf you want to learn more check out occurs when the zygote receives an extra chromosome at the moment of conception.

o Refraction is used in telescopes because light passes  through the lens, is refracted, and meets a point called  the focus. This light then goes through a second lens  called the eyepiece. The focal lens, or the distance

between the center of the lens and the point where the  spot of light is smallest, determines how much the

∙ Reflection- when light bounces off a surface; the angle at  which it bounces off is perpendicular to the surface the light  strikes.

o The curved nature of the lens made it able to also form  a focus point.

o Without alteration, this focus point is at an awkward  location because it is nin the light path of the object

2. Prime Focus- blocks only a small fraction of light

3. Newton’s Telescope- The focus of the primary mirror  is to the side of the telescope tube because he added a  small flat secondary mirror to reflect light.

4. Cassegrain Telescope- brings the focus of the

primary mirror to the rear of the telescope by reflecting  light with a secondary mirror back through a hole made  in the primary mirror. If you want to learn more check out unr kc

5. Coude Telescope- moves the focus away from the  telescope to anywhere in the observatory. 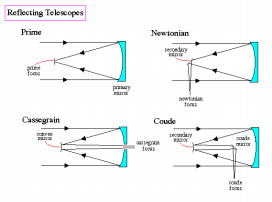 ∙ Light Gathering Ability- one advantage over the eye/another  function of a telescope that refers to the capability of larger  and larger telescopes to produce brighter and brighter  images, allowing observers to see fainter objects. We also discuss several other topics like amath notes

∙ The largest telescopes built in the last century and today are reflectors because they applied a thin layer of shiny metal to the surface of glass, which makes the mirrors extremely  reflective, reflecting more than 90% of visible light. Also, the  mirror itself can be glass or another ceramic, which does not  have to be optically perfect since light never passes through  it. They are easier to shape and are lighter than metal.

∙ Atmospheric blurring- distortions in images caused by any  misalignments in the telescope mirror and its supports and  by atmospheric turbulence.

∙ Active Optics- methods that adjust for mechanical and  optical misalignments due to manufacturing errors in the  shape of the mirror and to the stresses on the mirror when  the telescope is in different positions.

o First, it divides the image of a star into cells. If there  were no distortion, the parts in image of each cell would be exactly centered. A computer then determines the  necessary correction to the shape of the primary mirror  to center the image in each cell.

o The system divides the light from a star into pieces.  Lasers then excite atomic sodium, causing it to emit at  a wavelength of 5890A. The sodium “star” then  appears as a point of light and is high enough in the  atmosphere to be above the distorting effects of the  atmosphere.

∙ Radio Telescopes- a parabolic dish that acts like the mirror of an optical telescope by focusing the radio waves from the  sources it is pointed toward onto the dipole. The dipole at

the focus produces electric currents, which receivers amplify  and record.

o A major disadvantage is their poor resolving ability, or  the ability to separate two images.

∙ Interferometry- the technique in which telescopes far apart  synthesize a telescope with a diameter equal to the Earth’s  diameter. Observers record the data from each telescope on  magnetic tapes. Researchers then paly the tapes back into a  computer that combines the signals as if they were from a  single telescope.