Description: Study guide that follows the book with pictures to help Also put some tips/helpful hints for each free response problem

proton donor is what?

▪ A form of coordinate covalent bonding

o Two chemical species that differ by one H+ ion

proton acceptor is what?

• Def: a substance that can loose or gain a H+ ion (it can be an acid or a base in the reaction) o Needs both a H atom and a lone pair of electrons

o Water is the most common example of this

what is The pH scale?

• Most acids are weak acids, on the only ones listed above are considered strong acids • Weak acid

• Def: an equilibrium constant for the reaction of a weak acid/base with water  • Weak acids

▪ Only include concentrations of aqueous solutions and gases

• No liquids or solids

▪ Only include concentrations of aqueous solutions and gases

• No liquids or solids

• Def: a reaction between an acid and a hydroxide base in which a salt and water is formed o AX + BY <> AY + BX

• Water can act as both an acid and a base

• Def: an aqueous solution containing substance that prevents major changes in solution pH when  small amounts of acid or base is added We also discuss several other topics like what was the paradigm shift in how we view easter island?

o A substance that will react with and remove acidic or basic molecules from a solution  • So a buffer is the concentration ration of a weak acid and the salt of its conjugate base.  o pH = pK (a) + log( [A-]/[HA] )

o This represents the chemical activity of an electrolyte

▪ Positive or negative charge does not affect in the numerical value

• Def: the study of hydrocarbons

Hydrocarbons and their derivatives

• Hydrocarbon: a compound that contains ONLY hydrogen and carbon

o Unsaturated: carbon-carbon bonds in which at least one double or triple bond is present • Hydrocarbon derivative: a compound that contains hydrogen, carbon, and one or more additional  elements

o Carbon atom directly bonded to one other carbon

• Def: used to represent how the various atoms bonds are connected.

o Expanded structural formula: shows all atoms in a molecule and all bonds connecting the  atoms

▪ Does not show the hydrogen atoms

• Def: a structural feature in an organic molecule that is directly involved in most of the chemical  reactions that that molecule participates in

o Only possible with 4 carbon chains or longer

• Steps to finding all isomers

o Take off one carbon and move it to a different place on the chain to create a branch ▪ For it to be an isomer, you need to an actual unique arrangement

• Branches placed on different carbon in the chain

o Def: differ in the connectivity of the atoms 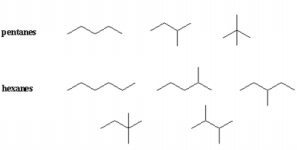 • Trans: opposite side of bonded carbon atom

o Same rule; can only create isomers with 4 or more carbons

▪ Be careful with stereoisomers and number of carbons 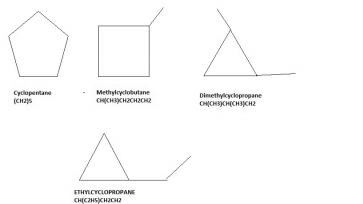 • Def: a saturated chain of hydrocarbon that does not form a circle contains only carbon-carbon  single bonds

• Def: saturated chain of hydrocarbons that forms a ring

Nomenclature for Alkanes (steps to take)

a. Name chain (how many carbons does it have?)

2. Number the carbons in the chain starting on the end closest to the substituents 3. Locate and name substituent groups

a. If there are multiple substituents that are the in the same form indicate that with a di-, tri-,  tetra-, penta

4. If multiple substituents of different forms are present follow steps 2 and 3 then arrange the name  in alphabetical order based on the first letter of the substituent group

o A group of atoms attached to the longest chain/ring

▪ Def: group of atoms that would be obtained by removing a hydrogen atom from an alkane  ▪ -- CH3: methyl 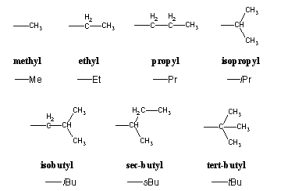 • Density that are lower that water

o Light or heat is needed for reaction to occur

o One or more halogen is incorporated into the molecule

o Heat or light is needed

• Def: a hydrocarbon that contains at least one double or triple bond in the carbon-carbon chain o This causes the chain to bend a bit and not be in the same shape because of the bond  strength.

▪ The double/triple bonds are where the reactions site occurs

• Atoms not involved in the double bond form a tetrahedral shape

o Not common to have multiple double bonds

o Must contain the double bond

• Number what carbon the double bond takes place on

o Has the same carbon-atom arrangement

o Redraw the molecule to emphasize the carbon-carbon double bond

• Def: non cyclic hydrocarbon substituent in which a carbon-carbon double bond is present • Most common

Physical properties of alkenes and cycloalkenes

▪ The double bond is broken

▪ Ni or Pt, heat, and pressure is needed for the reaction to occur

▪ Alkane is formed from an alkene

o Most common halogens are Chlorine (Cl) and Bromine (Br)

▪ H2SO4 is needed for this reaction to occur

• Polymer: a large molecule formed by the repetitive bonding together of many smaller molecules  o Copolymers: polymer where 2 or more monomers are present

• Monomer: the small molecule that is the structural repeating unit in a polymer  • Alkenes undergo an addition reaction with one another to form carbon-carbon single bonds  o Specific catalysts are needed for the reaction to occur

• Def: has at least one carbon-carbon triple bond

• Constitutional and positional isomers are possible

Physical and chemical properties of Alkynes

• Like alkanes and alkenes, alkynes are very flammable and readily undergo combustion o When undergoing an reaction it takes 2 molecule conversions

▪ 1 reaction leads to a molecule with a double bond

▪ 2 reaction leads to a molecule with single bonds

o This reaction behavior is very different from alkenes and alkynes

o Has a delocalized bond and 3 single bonds 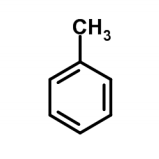 ▪ ALCL3 needed for reaction to occur

▪ FeBr2 or FeCl2 is needed for the reaction to occur

1. Given name and draw structure

b. All the steps/rules are in the notes above

i. Def: differ in the connectivity of the atoms

1. Difference in the order in which the atoms are attached to each other

i. Def: same molecular and structural formula but different orientation of atoms in  space

i. Cis: same side of bonded carbon atom

ii. Trans: opposite side of bonded carbon atom

i. Same rule; can only create isomers with 4 or more carbons

1. Be careful with stereoisomers and number of carbons

spiral, scroll-like ornament that forms the basis of the ionic order.