UA / Political Science / PSC 321 / What is anarchy in the international system made up of?

Description: Includes notes on all class lectures, outside reading, and questions presented in class.

Please tell me you're going to be posting these awesome notes every week..

∙ Anarchy in the International System made up of: o Interactions

 Effects how states can behave

 Basis of interactions is POWER

o Introduction of States as players

∙ Effective due to:

What does security dilemma mean?

 Terrorism is an interesting case

because the international system is

so state centric, that historically

 Required military capabilities and the ability to

∙ Power really means getting other actors to do

o Economic Power is the most important

∙ U.S. spends more than other 9 largest  If you want to learn more check out contact between a phage and its bacterial host occurs by _____.

o Partially due to more advanced

technology that is very expensive

o Carrot and Stick alter behavior of an

o Frame the nature of interactions with

o Loss of face when it doesn’t work If you want to learn more check out the need for is a psychological benefit of prejudice that can come from either authentic pride in accomplishments or from derogating other groups.

o Initial preferences and beliefs are

**U.S. has lots of structural power

∙ China has tried to create a story

about China through creation of

∙ The role of Diplomacy can be

o Military and economic power are

 Creates interest in other States

power for some states

 Interdependence: shared gains through  If you want to learn more check out Name the six core concepts of psychopathology?

 Leads to sensitivity and vulnerability

o China can hurt U.S, but only at its own expense

o Problems for US include

 Problematic due to issues of conversion

o Economic use of Power

o Results from a problem of cooperation

∙ Both states can cooperate by de

o Arm while the other disarms

o Disarm while the other country arms

∙ Reduces belief that only military power can

o Technology and globalization were thought to have made  geography irrelevant

o Where you are matters

o Too large makes it difficult to govern

 Only way to quicker development is with strong

 Middle East is unstable due to influence from all

∙ Nazi Germany used it as justification for

∙ Able to defend and connect 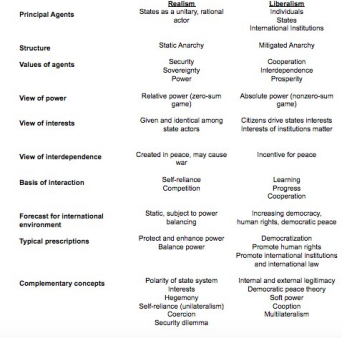 o Ferguson (“A World Without Power”):

o History is a competition between rival powers

o Considers absence of power vs. a world with a bipolarity  balance of power

o US is limited by dependence on foreign capital, troop  levels, and attention deficit

o Diffusion of technology works better across a common  latitude

o Jervis ("Cooperation under the Security Dilemma"): o Although actors may want the same thing, they may not be able to reach is due to miscommunication and distrust o When a state increases its own security, it decreases the  security of others

o In the prisoner’s dilemma, there is no solution in the best  interests of all participants—rational response is to defect o Best situation is when a state will not suffer greatly from  the other defecting

o Cost of CD is loss of sovereignty

o When one state thinks the other is not likely to be against  it, but is more likely to be an ally, state A will welcome the  rise in strength of state B

o War is avoided through domestic costs, realizing there will  be a chain of events, and the advantages of cooperation  o In a game of chicken, you opt for C because CD is better  than DD

o Wendt ("Anarchy is what States Make of It"):

o Structure (anarchy and distribution of power) vs. Process  (interaction and learning)

o Finnemore ("Legitimacy, Hypocrisy and the Social Structure of  Unipolarity"):

o Unipoles must legitimate power and diffuse it

o Foes can undercut legitimacy through credibility and  integrity

 Trying to deceive others

o Constructed more from within instead of without o Major regional power hierarchy is US, EU-Europe, Japan,  China and Russia

o Uses analytic eclecticism to look at understanding of  regions

o Two definitions of order are status quo vs. increasing  tendency towards peace

o Great powers can have little involvement, alter distribution  of capabilities, or cause other states to encourage, deter,  or reverse actions 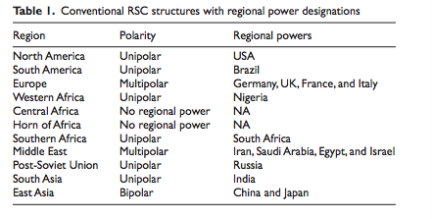 o What is the International System?

o How did the current system arise?

o Who are the most important actors and why?

o Are states the best form of organization for security?

o What is anarchy and is it the best description of the international  system?

o What does anarchy mean about sovereignty?

o Should sovereignty ever be violated and who gets to decide? o What would most people say serves as the basis of interactions  for states?

o If anarchy exists, how can there be order?

o Order or anarchy leads to certain outcomes. What are they? o What is the role of the US?

o What happens if the US stops playing its role?

o How do non-state actors complicate ideas about sovereignty? o Are resources power?

o How does a state attain soft power?

o Is military power as useful today as it has been historically? o Does it makes sense for the US to divest resources away from  military capabilities to something else that might be more  effective in developing power?

o How important will economic power be relative to other types in  the future?

o How do politics affect economics?

o How to institutional powers solidify powers for some states?

o How much does it cost to create a new interdependence when  one fails?

o What threats would cause the US to respond in ways that would  intentionally harm its economy?

o Does foreign aid help a state’s security goals? Why or why not?  o What economic conditions could lead to militarized conflict  between states?

o Are economic conditions responsible for the rise of non-state  actors that employ violence?

o Do economic conditions drive all conflict? If so, what should be  done about this?

o What makes the US attractive? Are other states more attractive? o What things are likely to be important with respect to states and  power in the future?

o Does it makes sense for the US to divest resources away from  military capabilities to something else that might be more  effective in developing power? What?

o How important will economic power be relative to other types in  the future?

o How important is soft power in the 21st century?