Description: This includes lecture notes, as well as the reading for L4-6. I include detailed examples from the homework as well.

Includes examples of the Homework! Posted the week before the homework’s are due to help everyone  get 100’s!

An oxidation reaction is the elimination of 2 hydrogens from a primary or secondary alcohol to form an  aldehyde or ketone.

A common oxidation technique is chromate oxidation which uses chromium trioxide or chromic acid to  oxidize secondary alcohols to ketones.

The mechanism for this type of reaction involves the initial formation of a chromate ester. The ester  then undergoes E2 elimination to form a carbonyl group.

What are alkenes and cycloalkenes?

A secondary alcohol goes to a ketone and primary to an aldehyde. After a primary alcohol turns into an  aldehyde it can be changed further with aqueous acid to form a hydrate. Then Chromium trioxide can be  used to turn the hydrate into a carboxylic acid like below.

The problem with using chromium trioxide is it can oxidize other functional group, even double and  triple bonds, because of this PCC can be used.

PCC is soluble in low polarity solvents, the most common is methylene chloride. That is used specifically  to turn primary and secondary alcohols to aldehydes and ketones.

What are the rules in naming alkynes?

H2CrO4=Remains ALCOHOL If you want to learn more check out What is marxism in simple terms?

In this example oxidizing a secondary alcohol, from the above information we know it will make a  ketone. If you want to learn more check out What are biological explanations? 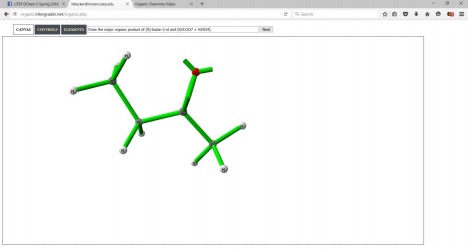 Example 2: Draw the major organic product of 2-methylpropan-2-ol and H2CrO4.

I like this example because this is a secondary alcohol, but it can’t be oxidized. Why you may ask?  Because the oxygen can’t many a double bond anywhere. This is an example of when the alcohol has no  reaction.  We also discuss several other topics like What influences organizational commitment? 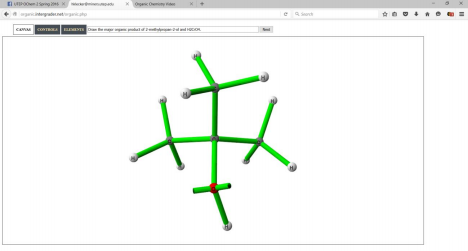 Example 3: Draw the major organic product of ®-2-methylbutan-1-ol and PCC in CH2Cl2.  We also discuss several other topics like What is the study of constancy & change throughout the lifespan called?

I choose this example to demonstrate both primary alcohols going to aldehydes and remembering to check for R  and S. So we already know this goes to an aldehyde, but if you look closely it also remains R chirality. 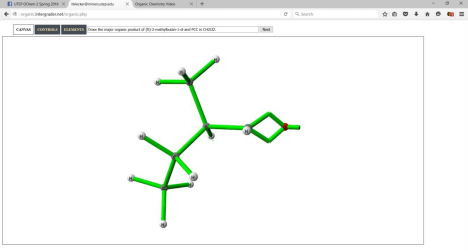 Elimination reactions can be either regiospecific or regioselective . Regiospecific means one isomer of an  alkene is produced. Regioselective means many isomers are produced, but one isomer is greater over  the other.  Don't forget about the age old question of What is meant by chirality?

To measure stabilization, the amount of energy given off when hydrogen adds to the double bond to  form an alkane is measured. This is convenient for comparing energy content of various alkenes. As  energy needed to hydrogenate a double bond decreases the stability increases.

Rule to remember: Sayzeft Rule’s it means to take the hydrogen to make the double bond from the  carbon with the least hydrogens. (Yes this statement is from last week remember Saytzeff can be spelled  many ways).

Steric interactions are important. If the double bond is in the center it is more stable. Also reducing  steric interactions increases stability.  If you want to learn more check out Why did enrico scrovegni commission giotto paint the arena chapel? 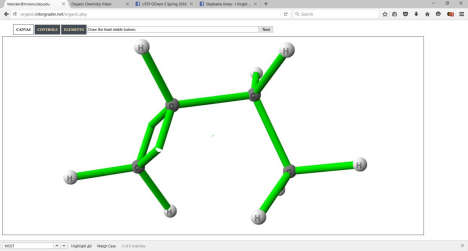 Example 2: Draw the most stable hex-3-ene.

In this example it is asking for the most stable. So we know the double bond must be in the middle, the  only other choose is trans or cis? Well, trans is the best for stability, if you look at the image the  hydrogens and alkyl groups are on opposite sides of each other. 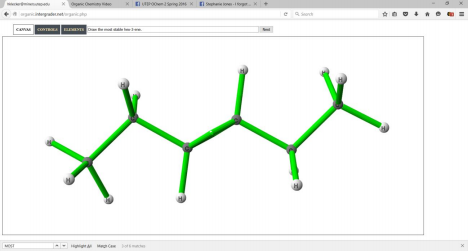 Example 3: Draw the most stable alkene with the methylyclohexane sigma framework.

Don’t let the wording sike you out, this is just like the above problem except with a ring. So we want the  most alkyl groups coming off the double bond (this means neighbors). So if you move around the ring,  most areas have only two neighbors but if the double bond is by the methyl that creates a third  neighbor, so it is more stable. 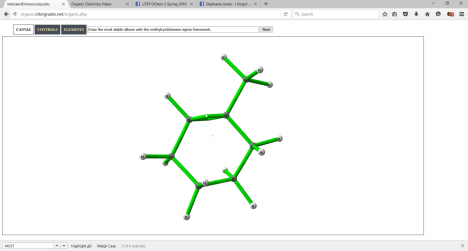 3. Indicate position of double bond by numbering parent chain to give the double bond the lowest  number.

Naming cycloalkenes is similar to alkenes except you number the ring so the double bond is in  between C1 and C2. Example below:

Polyenes contain 2 or more double bonds. Dienes contain 2 double bonds and trienes, three.  To Name Dienes or Triene- Follow alkene rules plus these addition rules: 1. Write numbers indication locations of double bond separated with common, then a hyphen.  2. After hyphen change parent ending from –ene to –diene if two, -triene if three and so forth.

Example of Naming Dienes or Trienes:

A side chain containing a double bond is an alkenyl.

1. Number carbons from the carbon that bonds the side chain to parent

2. When naming side chain use ending –enyl instead of –ene. Use parentheses so you  know the number belongs to side chain.

Alkynes are often called acetylenes because of the common name of the simplest  compound of this type. Ethyne which common name is acetylene.  IUPAC Naming of Alkynes:

3. Number so triple bond has the lowest number.

*If double bond and triple bond in competition, use the above procedure for  naming the parent chain, then for determining bond position use the following:  1. Find longest continuous chain with both triple and double bond.

2. Number the chain so multiple bonds get lowest numbers.

3. Number position of the double bond to parent.

5. For triple use –yne ending along with number identifying position. Number double  bond so triple takes precedence over substituents. *If both groups could get the  same number –en takes priority and gets the lowest number.

First step, find the longest chain with both the double and triple bond in it. That would be four so we  have a butane structure. Now we have to decide on numbering, while the triple bond USUALLY has the  priority, not in this structure since if we give the double bond the highest priority if gives the ethyl  hanging off a lower number. E is trans, Z is cis!

So the name of this structure is 3-ethylbut-en-3-yne! 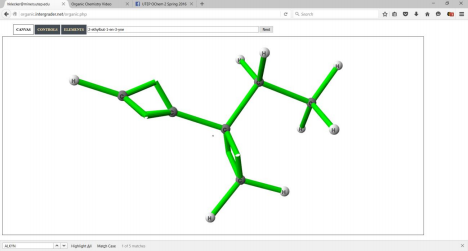 Since both groups are in the number one spot en is going to take the priority. So we know we have 3- methylpent-1-en-4-yne, but look closely there is a chiral center. The triple bond is priority one, followed  by double, then the methyl group. This makes this structure an S. 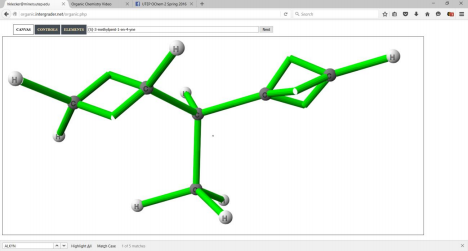 First draw it out, then deal with the orientation. For these problems E and Z are used. Z is cis, E is trans. 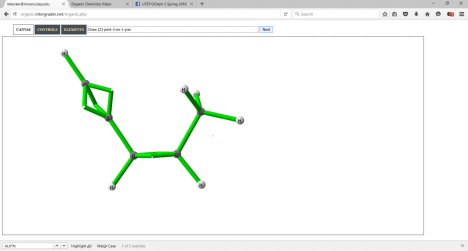 You will get easy problems like so: So we have 5 carbons. The en and yne are in the same location  numbering wise, so the en takes priority. If you deduce things fall into place quickly. 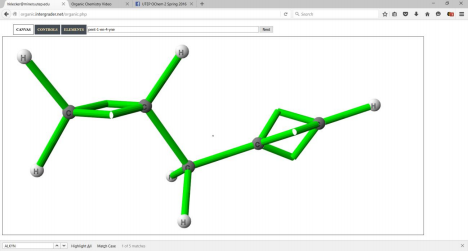 In this problem we have a pent, so draw five carbon, then start adding in the triple and double bonds.  The triple is taking priority on the 1st carbon, so draw that first, then the double bond on the 3rd carbon.  Finally add in the methyl. 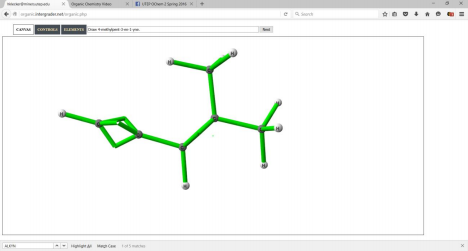 SN2 reactions usually lead to inversion means R to S. If you always come in from the back side you will  get the right structure, since inversion does not always happen. This is when the priorities end up  changing.

SN2 only occurs on primary and methyls.

Strong acids have weaker Hydrogen-Halogen bond, so that means a weaker Carbon- Halogen bond. To  determine the weaker halogen bond determine the halogens acid. So 1-bromobutane conjugate acid is  HBr. Remember: Acidity increases as you go down the periodic table. So HBr is a stronger acid than HCl.

Right ascension is measured in how many hours?

Identify is the key functions of government and explain why they matter?