Course: The Making of the 21st Century

Description: Here are the notes from lectures this week, enjoy!

• In practice: the people at the top would chose the people immediately below  them.

• A standard practice in any Communist party state.

• The way by which personnel decisions are made as to who controls the  communist party system.

• A way in which control was exerted (Gulag camp - prison)

• They created a sense of institutionalized paranoia

What is the nomenklatura system?

• Russia was cut off from the outside world in many regards.

• They were often self-sufficient

• People were encouraged to inform on each other, this was a way to prove  loyalty Don't forget about the age old question of Why did the siege of lewisburg happen?

• No ability to get outside media

• During the Cold War, the US broadcasted into Russia

• Absolute dominance over the information sphere

o This was a planned economy Don't forget about the age old question of What are real value functions?

• The state owned and allocated all productive assets

What is the meaning of institutionalized paranoia?

▪ Land, raw materials, factories, etc. were owned by the state Don't forget about the age old question of What is gregor mendel's known work?

▪ Allocated on the basis of physical commodities

▪ Villages, and groups of people were organized into a farm that had to  meet a supply target

▪ Through this, the state orchestrated control over the agricultural sector ▪ Very few private plots of land

• Priority for heavy and defense industries

▪ Concentrating efforts in one brief period to over-fulfill quotas

▪ If you didn't meet the quota, you could be sent to the prison camp

▪ No emphasis on profits

• They dominated the system after Stalin's death Don't forget about the age old question of What are the ethiopian dynasties?

• Less a conscious ideology than fascism or communism

• Energized by concerns about inequality, deprivation, unfairness, "arbitrariness" of life • It emerged particularly in Sweden, but also in Britain and the United States • An attempt to reduce the amount of risk in society

o A movement in democratic society. Not anti-liberal, not anti-Western, no fully anit capitalist; not fully anti-socialist either. It came to power as an electoral movement,  acceptance of the rules of democracy. Requires majority support in legislative  bodies We also discuss several other topics like What is the meaning of protozoans?

o Given particular force by the Depression.

• The lack of a supreme authority in the international system to enforce the law • Power Transition Theory: Status order

• The desire to regain control of the German population

• Would Germany nearly as aggressive if Hitler hadn't come to power?

• Could there have been no war without Hitler?

o Failure of the League of Nations (Japan and Italy) We also discuss several other topics like What is the basic functional units of all living things?

o Weakness of the West and International Order generally

o Distrust among Britain, France, and  the Soviet Union

• In the case of Japan: they lacked raw materials so they couldn't pursue self sufficiency

• It contributed essentially to the war

The Steps to War (and War)

• 1938: Germany takes over part of Czechoslovakia, then the whole country in 1939.  Appeasement

o Axis Pact signed of collaboration for alliance between Germany, Italy and France o US puts increasing pressure on Japan to withdraw from China; lend-lease support  for Britain

o Germany declares war on the US

• Much greater slaughter than World War I

• Distinctions between combatants and civilians totally breaks down

o There were laws of war that had gradually evolved.

• Economic Devastation of most Europe west of the Ural Mountains

• US even more preeminent of the world

• Connections between economics and peace

The World in September 1945

• US economically, technologically preeminent country of the world

• Many colonial possessions pushing for independence

The Mistakes of the Past

• The mistakes of the WWI settlement

• Failure of collective security and the League of Nations

• Revive and improve the League of Nations - the United Nations

o 2 Houses: the General Assembly and the Security Council

o In the General Assembly, we accept that all countries are equal

o Security Council: the great powers have more power than everyone else; power is  reflected in special privileges

o The International Bank for Reconstruction and Development (World Bank)

• It was originally created to provide capital for reconstruction. As those  economies recovered, it supported capital and investment for new nation states.

• It was supposed to prevent tariffs between countries.

• It was designed to regulate and negotiate tariffs in order to promote trade. • The ITO didn't end up coming into existence.

• Hold those accountable for the war responsible (war crime tribunals) • Promote Human Rights (the Universal Declaration of Human Rights, etc.) o This was negotiated by all the members of the states in the UN.

• 1945-1949 was a remarkable period in the construction of a truly global community. o So much was done during this period but also so much was not completed.

The Failure of the Settlement to Hold

• The intended global order essentially came apart less than two years later. • Distrust between the Soviet Union and the US.

• Heightened by the US monopoly on nuclear weapons

o Ideologies and claims to universalism

• A world order based on freedom and liberty.

• The state will play a larger role in the new world order.

The Onset of the Cold War 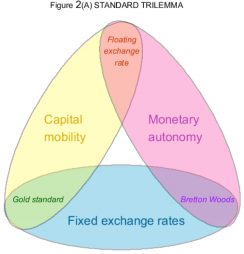 • The Soviet Army was in Eastern Europe, Northern Iran, NE China, and Northern Korea • There were strong communist movements in France and Italy.

• Communist movements in Asia (Burma, Indonesia, Philippines, Indo-China, China) • There's not real commitment of US troops at this time, it's all about providing money and  advice.

Why a Cold War?

o The nature of capitalism/socialism/Soviet nationalism

• Capitalism will cause war.

• The Soviet Union represents an alternative type of representation

• They must survive this onslaught coming from the capitalist left.

• The emergence of a powerful Germany was worrisome to the Soviets. o US nuclear monopoly

o From Roosevelt to Truman

o The nature of communism and broken Soviet promises

o US nationalism/"preponderance" of power

o US values as universal

• Cultivate the exceptional way of life in America

• The US wouldn't exert very much effort to spread the model

• The US sees itself as embodies itself with ideas around freedom

• It fell on the United States to defend global freedom

• The US saw human rights as universal

• After WWI, the US made a bad mistake

Going into the Cold War, the Soviet Union is no where near strong enough to challenge the  United States

• This can be demonstrated in their low levels of GDP, illustrating the poor nation

o Universalizes the conflict in Greece as the struggle between two ways of life and  argues that the US should come protect freedoms and human rights.

o With this speech and its acceptance, the US becomes the banker of democracy, they  begin to spend money against the Soviet Union

o The US wants this to be more systematic

o The US wanted to stimulate rapid economic recovery.

• Unified the department of the navy and army to create the Department of Defense • Created the CIA, National  Security Agency.

What are the cultural developments after world war 1?

Matter is comprised of what?