Description: This is a study guide for exam 1 for BIOE 1010.

▪ Have a distinct nucleus

*Water makes all of the complex  chemical reactions of life possible.

∙ More than 2000 chemical reactions take place in a cell every second;  many of them are mutually incompatible.

How many filters does florescence microscopy have?

∙ In the cell there are membrane-enclosed compartments with specific  functions.

shape provides a larger surface area so they can carry more  oxygen.

o Neurons: the core components of the nervous systems

How do the outermost electrons determine how atoms interact?

If you want to learn more check out How bacteria may survive without a cell wall?

o Light Microscopy: magnifies cells up to 1000x and resolves details  as small as 0.2 um.

▪ Can see no internal details

Don't forget about the age old question of How androgen-insensitivity syndrome happens?

o Florescence Microscopy: cells are treated with fluorescent dyes,  which absorb light at one wavelength and emit it at another,  longer wavelength.

▪ Contains two filters If you want to learn more check out What is bartlett's theory of reconstructive memory? 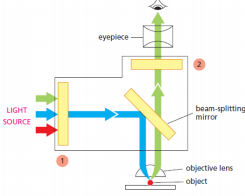 Don't forget about the age old question of How does confocal microscopy use beam?

o Confocal Microscopy: builds an image by scanning the specimen  with a laser beam

We also discuss several other topics like What are non equivalent hydrogens?

o Transmission Electron Microscopy: uses a beam of electrons  instead of a beam of light and magnetic coils. The specimen in  stained with electron dense heavy metals that absorb electrons. ▪ Can resolve details as small as 2 nm Don't forget about the age old question of How do you know a solution is saturated?

▪ Can even see a portion of a long DNA molecule

▪ Sample has to be at a very low temp

▪ Has to be used in an vacuum 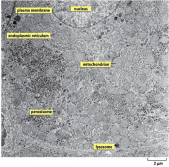 o Scanning Electron Microscopy (SEM): the specimen is covered  with a film of heavy metal and is scanned by a beam of electrons.  ▪ Creates a 3D image

▪ Can resolve details between 3-20 nm 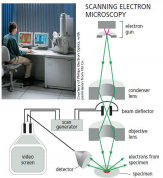 ∙ Matter is made of combinations of elements

∙ Elements are substances that cannot be converted into other substances ∙ An atom is the smallest particle of an element that still remains its distinctive  chemical properties.

∙ A molecule is a particle formed by the chemical union of two or more atoms. ∙ To achieve a complete outermost shell (the electron configuration of noble  gases), unstable atoms tend to gain, lose, or share valence electrons with  other atoms participate in chemical reactions and form molecules. ∙ The outermost electrons determine how atoms interact 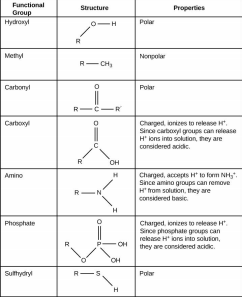 ∙ The 4 levels of organization:

o Primary Structure: the sequence of amino acids that make up the  polypeptide chain

o Secondary Structure: can take the form of an alpha-helix or a beta-sheet which are maintained by hydrogen bonds between amino acids. o Tertiary Structure: the folding and bonding of the secondary structure. o Quaternary Structure: occurs as a result of interactions between two or  more tertiary subunits.

∙ An oligomeric protein is a complex of more than 1 chain that interact with each  other.

∙ When the protein folds into its specific 3D conformation amino acids which  belong to different regions of the polypeptide chain are brought together to form  a cavity with a unique geometry (bonding site).

∙ Binding sites allow a protein to interact with its specific ligand.

∙ Enzymes are the most highly specialized proteins

∙ They are the most abundant biomolecules on earth

∙ The main energy source for the human body

THIS DIAGRAM WILL BE ON EXAM! 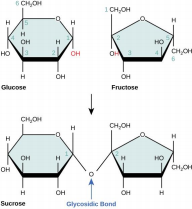 KNOW WHAT THE GLYCOSIDIC BOND

the liver and skeletal muscle.

∙ To go from the building blocks to larger units, cells need

CATABOLISM WILL BE ON  THE EXAM!

∙ Energy is released by gradual oxidation of sugars and fats. ∙ Energy is transferred to carrier molecules (ATP and NADH)  which store it temporarily in energy-rich bonds.

∙ The 2 types of reactions (releasing and requiring energy) are  coupled by enzymes in many steps.

∙ In the cell, groups of enzymes work together: the product of  one enzymatic reaction becomes substrate for the next one.  This is called a metabolic pathway.

∙ Glycolysis occurs in the cytosol (cytoplasm). The first half of  glycolysis uses 2 ATP but it gains 2 NADH molecules and 4 ATP  in the end.

∙ The difference between NAD+ and NADH is NADH has an extra  hydrogen bond and two more electrons than NAD+. 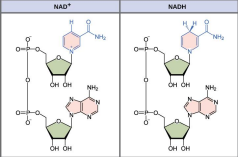 ∙ Cells form ATP by complete oxidation of nutrient molecules in  many small steps so that most of the energy released can be  stored.

What does routine activities theory suggest to reduce crime?