Name: Notes for Parasitology Exam I

toxoplasmagondii (gets into the brain of cats).

Leishmania ­ can either be internal and interpreted with macrophages, mucus  membranes,

What is the meaning of parasitology?

● Understanding relationships of parasites with their hosts

● Basic characteristics, what unites them

● What diseases they cause, if they cause disease, how they interact with the host.  Symbiosis

● Parasites are the symbionts that benefit, the host usually does not.

● Mutualism We also discuss several other topics like What genetic disorder is associated with a change in the cl- protein channel on the plasma membrane?

What are the types of symbiosis?

○ Termites and their Protozoa in their intestines

○ Eating at the same table

○ One partner benefits, the host is neither benefited or harmed

○ Sharks and the remoras

○ Can be ectoparasites or endoparasites

○ Trypanosomes ­ live in blood stream and feed on glucose

● Organisms that grow, feed, and are sheltered on or in a different organism while contributing  nothing to the survival of that organism

● Obligatory relationship for the parasite.

○ Without the host, the parasite will not survive

● Can be unicellular or multicellular

● Some reproduce inside their host, some do not.  Don't forget about the age old question of What are the scientific changes after world war 1?

● Have deficient metabolic pathways and depend on the host for nutrients.  ● Many have complex life cycles

○ If there is only one host

○ Where the parasite reproduces if there is no sexual reproduction

○ No parasite development but it remains ineffective

Adaptations to Parasitism Don't forget about the age old question of Matter is comprised of what?

● Loss of some metabolic capacities

● Loss of some systems If you want to learn more check out Why study families?

How many people are affected If you want to learn more check out The direction of the field vector is tangential to what?

Where these diseases are found

What is being done about it

○ The number of cases of a disease at a given time

○ The number of new cases of a disease per unit time

● Numbers have not changed much

● Infections in the US

● Emergence of the new disease agents

● US citizens normally acquire diseases by traveling to other countries

○ Cure disease, they die of something else

Parasites of Domestic and Wild Animals

● Wild animals usually do not experience massive death due to parasitic infections ● Domestic animal living conditions Don't forget about the age old question of What is a paradigm shift?

■ Get bite by deer tick

Multiply rapidly within the  definitive host

Do not proliferate in the

metabolism associated with  growth and division

Approaches for the Control of Parasitic Infections

○ Not many, difficult to find

○ Many are also hard on the host

○ Based off of arsenic

○ Insects that transmits them

● Exploit differences in neurophysiology between host and parasite

South of the Sahara Desert, the Fly Belt

Tsetse fly; can't have cattle because they can infect cows.

Grows in through foot

Form and Function of Protozoa

● Many have multiple nuclei

○ Found in plants and animals, but most have peroxisomes

○ Found in a variety of organisms

○ A variety of extrusomes

○ Arises from the kinetosomes

■ The nucleus and other organelles divide repeatedly before cytokinesis

■ Gametes can be the same or different

○ Secrete a resistant covering and enter a resting stage or cyst

■ Digestive organelles that form around any ingested food

■ Biochemistry varies depending on environment

● No TCA, electron transport but still need to oxidase NADH

● Includes the trypansomes and leishmania

■ Free living or parasite of fish and invertebrates

○ Many functions including Endocytosis and exocytosis

● Undulating membrane ­ some species, characteristic feature of most of them ● Some have a glycocalyx

○ A short piece of RNA is spliced into every mRNA molecule

○ A DNA containing region within the mitochondria

○ Besides the kinetosome at base of the flagellum

● Heterogeneous and ever changing

● Cannot function without its transcription

■ During certain life cycle stages, there are different sorts of editing.

● All have a single nucleus

● Either elongated with a flagellum or rounded with a short flagellum

○ Different in shape and position of the kinetosome and kinetoplast

Mitochondrian is extremely long and extends most of the length of the body.

● definitive stage of the life cycle

● What the bloodstream form of the parasite looks like and the infective stage. 8

● Found in the insect vector

● Found in insect and mammalian hosts 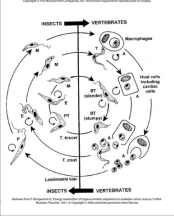 A comparison of the different life cycles

● Only 1 VSG is expressed at a time

● Produced/released through the flagellar pocket then covers the surface coat ● Allows the parasite to stay one step ahead of the immune response (also seen in other  parasites including Plasmodium and Schistosoma). 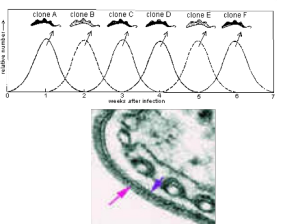 ○ Parasites develop in the anterior portion of the insect gut

○ Parasites develop in the hindgut of the insect

● kinetoplast posterior to the nucleus

● Found in all species of Trypanosoma

● Reproduces in the vertebrate host

● kinetoplast is anterior to the nucleus

● Stage that reproduces in the vector gut

● Chancre is more obvious than in gambiense (disappears within 1­2 weeks) ○ Chancre is a swelling of the bite area.

● Winterbottom’s sign (swollen lymph node at the base of the neck).

● Fevers, generalized pain, cramps, weakness, headaches, rapid weight loss, can have heart  involvement and  affect ability of muscle to maintain integrity, some nervous system involvement but only if it enters the cerebrospinal fluid and patients usually die before that, lymph nodes.  Trypanosoma brucei gambiense

● Chancre is less obvious than in rhodesiense

● Reservoir hosts are domestic animals (pigs, dogs, cows) as well as antelope ● Do not get diagnosed until they've had the disease for years

○ By the it's too late

● Extreme exhaustion, mental fog, decreased coordination, tongue tremor, paralysis, convulsions. Parasites are everywhere. Person will fall into a coma and die of the symptoms of the disease ● Treatment is not effective. Will die within about three years

● Found in the fly belt of Africa, which has been rendered useless for cattle farming

■ Just use fermentation due to the high levels of glucose in the bloodstream. ○ Short stumpy trypomastigotes

■ Infective to the tsetse fly

● Portion of lifecycle is in blood, untreatable once it enters cells.

● First described in 1909 by Dr. Carlos Chagas in Brazil

● Transmission via dedication of metacyclic trypomastigotes with feces into wounds.  ● Invasion of cells (spleen, liver, lymph nodes and all muscle cells).

● Transformation into amastigotes and formation of pseudocysts 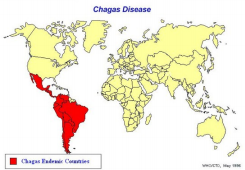 Shigoma: the initial bite of the kissing bug.

Parasites prefer skeletal or muscular cells but will infect any type of cell.

● Romana’s sign ­ edema of conjunctiva and eyelid (50% of patients)

● Death can follow within 1 month if heart is involved.

● xenodiagnosis: triatoma new is allowed to feed on suspected patient; wait 20­30 days then look  for parasites in the gut

Treatment: none for intracellular stages, so basically incurable

● must be early in infection

● Best mechanism is to prevent the disease

● More than 350 million people at risk

○ Zoonosis is commonly the infection for humans

d. Can have potential secondary infection

b. most every organ can be infected

c. rots the skin away

Promastigotes in the sandfly gut 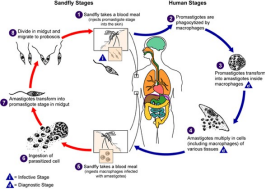 Promastigotes of Leishmania sp. from culture

● grows in the vector

● injected into the human host when the vector feeds.

● promastigotes are approximately 25 micrometers in length

2. Parasites reside in phagolysosomes that normally function to digest foreign particles 3. species of Leishmania differ from each other

4. Don’t fully understand how the human host contributes to the disease

5. Treatment may result in a new symptom that was not originally seen.

How can Leishmania amastigotes live in macrophages without being killed? ­ parasites are taken up into phagolysosomes

­ With better understanding of these parasites, could these be genetically engineered to  specifically target macrophages that induce the T cells that attact the myelin sheaths in  MS?

­ Transmitted by different species of Phlebotomus

­ found in densly populated regions in WEst/Central Africa, the Middle East/Mediterranean and  India

­ Ulcer appears (within 2 weeks); it is dry with a high number of amastigotes  ­ Ulcer can treat itself

­ similar to L. tropica but found in sparsely populated areas of Africa/Asia/Middle East ­ lesion ulcerates quickly with a few amastigotes

­ Can self cure within 2 months to a year

­ inoculation in an inconspicuous location (esp. female children in ME)

­ Disease is a zoonosis

­ Will spontaneously self heal (within months) except on the ear

­ hard to treat, does not respond well to drugs

­ Causes most serious disease: the parasites penetrate all the organs of the reticuloendothelial  system:

­ death will occur within 2­3 years without treatment

­ Symtoms can occur within weeks up to a year

­ Same as L. tropica plus bed rest and nursing care

­ course of treatment is extremely long

­ cosmopolitan in distribution (anyone can be infected)

­ any animal can serve as a reservoir, it just has to contaminate the water supply ­ have an adhesive disk that attaches to intestinal wall.

­ Cyst stage is the infective stage

­ TRophozoites are small (12 micrometers to 15) long

­ TRophozoites live in the small intestine

­ can interfere with absorption

­ Can go to a relatively large number rapidly

­ Cysts are found in the colon

­ pass out with the feces

­ cysts have two nuclei and go through a bit of maturation

­ Trophozoites are not infective. Only cysts.

­ is usually the form found in stool

­ no mitochondria therefore no TCA or electron transport

­ B vitamins and our bile salts.

­ end products of metabolism are: CO2, ethanol, and acetate.

­ heavy infection interferes with absorption of fats and other nutrients

­ massive infections possible, as many as 14 billion cysts in a watery stool ­ Antigenic variation

­ do not lyse the cells they attach to.

­ 200 million people may be infected worldwide

­ diagnosis: recognition of trophozoites or cysts in fecal smears

­ metronidazole (flagyl)  for one week

­ whole family will be treated.

­ prevention is the best method

­ degrade carbohydrates to acetate and lactate and CO2

­ commensal that lives in the mouth cavity

­ does not cause serious disease

­ lives in the urogenital tracts of men and women.

­ one of the most common STDs

­ females have inflammation with itching and copious white discharge

­ males are asymptomatic; cause of persistent infections in females

­ acute infections can become chronic with a lessening of symptoms

­ increases susceptibility to HIV and other STDs

­ some resistance has been documented

­ due to loss of two oxidoreductases

2 large essay questions (one over life cycle, pathogenesis, distribution, treatments) DETAILS.  Definitions (give word and you have to write the definitions) Spelling. Underline the names.  Life cycle diagram that needs to be labeled, maybe two. Bonus question

CDC has the life cycles

Social cognition is a study of what?

What is the significance of the unemployment rate?