Description: Week 5 chapters, hopefully the notes will help with the chapter 13 quiz! :)

Chapter 7: The Control of Attention

○ can see the stimulus if pointed out, but syndrome seems to be a problem with directing attention to the stimulus

● Balint’s syndrome: lesions to dorsal posterior parietal and lateral occipital cortex ○ results in simultanagnosia: unable to attend to and perceive more than one visual object at a time

What is mesulam model?

Control of Voluntary Attention We also discuss several other topics like How do you name compounds with functional groups?

○ cuing paradigm benefits: could study the differences in neural activity at time the cue appears and at time the target stimulus appears

What is an easily detected stimuli with a single featural difference?

If you want to learn more check out How do you find the displacement vector?

● increased neural firing rates in LIP when monkey makes saccade towards target location, covertly directs attention, or delays saccade to location → increased activity attributed to attention allocation to target area We also discuss several other topics like How do you encourage employees to participate?

● premotor theory of attention: shifting attention and preparing goal­directed actions are controlled by shared sensory­motor mechanisms Don't forget about the age old question of What are the two ways to exploit mass media?

● visual search: looking for something specific in a complex scene

Behavioral studies We also discuss several other topics like Who is the vice president under lincoln for about a month?

● experiments ask subjects to find a “target” in the middle of many other “distractors” ● pop­out stimuli: easily detected stimuli with a single featural difference ● amount of distractors does not influence time taken to find target

● to find conjunction targets, attention is directed serially to each item to find the correct target, so reaction time increases

● binding problem: how perceptual features are bound together to create a coherent representation of an object

○ proposed that focused attention is needed for this

○ subjects tend to report illusory conjunctions (ex: reporting seeing a red O in a field of red objects and lots of O’s) when task is briefly displayed → supports theory that it takes focused attention to bind features of objects together in order to find the conjunction target Don't forget about the age old question of What is the difference between society and culture?

● N2pc wave: negative wave in occipital and parietal regions that is related to shifting and focusing attention during visual search

Attentional Control as a System of Interacting Brain Areas

Interactions between Components of the Attentional System

● default mode network: areas that become more active when someone is not giving attention to a cognitive task

Attention, Levels of Arousal, and Consciousness

● binocular rivalry: when left and right eyes are shown different stimuli and perception switches back and forth between the two stimuli

○ ex: showing a house to one eye, and a face to another eye → fMRI studies show that fusiform gyrus activates when consciously perceiving the face, but

hippocampal activation when perceiving the house

● activity in visual association cortices are necessary for visual awareness, but not sufficient

○ stimulus presented in blind spot (scotoma) is not seen, but when forced to respond to stimuli in blind spot subjects report correctly (more than just chance) while saying they have seen nothing

○ the unseen stimuli elicit activity in extrastriate regions of primary visual cortex → supports conclusion that visual association areas are necessary for awareness, but not sufficient

● Environmental Dependency Syndrome: patients with damage to anterior+medial parts of frontal lobe acted according to their environment, not their own goals

○ imitation behavior: patients mimicked whatever the interviewer did

■ ex: seeing a flight of stairs and walking upstairs even if you didn’t want to Prefrontal Cortex and Executive Function

○ controlling rules to use in the proper context

Organization and connectivity of the prefrontal cortex

● lateral prefrontal cortex: on the outer side of the 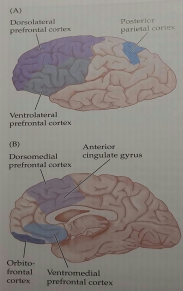 ● ventromedial cortex: along the middle, divided

the bottom and back) includes anterior cingulate

Consequences of damage to the prefrontal cortex

○ dysexecutive syndrome: damage to lateral prefrontal cortex; no deficits in intelligence, but cannot plan, complete projects, or have insight to actions; will confabulate­­deny that they have a problem and create implausible explanations

● all prefrontal damage incidents: problems with forming,updating, and implementing rules for effective/appropriate behavior

● damage to lateral prefrontal cortex: difficulty making mental plans and motor movements, don’t respond as much to world around them, withdrawal from society and little interest in things

● suppression of unimportant/distracting info or behaviors

● ADHD: difficulty inhibiting behavior even after a signal says to stop

Shifting among rules for behavior

● perseveration: patients with prefrontal damage continue to sort cards with a previous rule despite knowing that it’s wrong

● delay­period activity: delay period=time between initial activation of information and the use of the information to do something

● increases as more information is held in working memory

● increased activity is associated with resistance to distractions

Who was the first neuroscientist?

What are the principles of family systems theory?