Description: This study guide covers what is going to be on the exam, since I want to give you enough time to study I only included the first part of chapter 3.

1. What is the study of psychology?

3. What 2 tasks have the most errors?

4. What part of psychological studies include thoughts and emotions? A. The brain B. Behavior C. The mind

5. What procedure shows the various active parts of the brain? A. MRI B. FMRI C. CT scan D. MRA

6. What science measures how the stars move?

8. Does The hot hand theory Exist? Yes or No. (After a basketball shooter  has made 2 or 3 shots in a row, that shooter will be more likely to make the next shot than after missing the last 2 or 3 shots.)

How many neurons can one neuron communicate with?

9. Who was not part of prescientific psychology?

10. Where did Francis Bacon believe knowledge came from? A. The senses B. you’re born with it C. school

A. Rationalist B. Empiricist

12. Who discovered that our theories may be biased? A. Francis Bacon B. Plato C. John Stuart Mill D. Sigmund Freud 13. Who founded the worlds 1st psychology lab?

14. If you are experiencing increased heart rate, sweaty palms, and  dilated eyes, what emotion are you expressing?

What part of psychological studies include thoughts and emotions?

Don't forget about the age old question of How to communicate effectively and work collaboratively?

15. Which psychologist didn’t do any research to see if his methods  were helping people?

A. Teeth B. Women’s reproductive Systems C. All of the above 17. Who focused strictly on observable behavior?

18. What are the 3 levels of psychological analysis? A. Biological, Psychological, Sociocultural

19. What level does looking at emotional processes fall under? A. Biological B. Psychological C. Emotional

22. What level does a social psychologist study?

A. Sociocultural B. Biological C. Observational

24. Which is not a step of the Scientific Method?

A. Perform a controlled test B. Form a hypothesis C. Keep your results  a secret

E. None of the above Don't forget about the age old question of What is oligosaccharide?

28. Which type of variable can we not manipulate? A. Weather B. Setting C. Personality D. Time

30. To make an experiment valid we must use __________ when  dividing participants in a study. We also discuss several other topics like What is the meaning of hedonism?

31. If the left side of the classroom averaged 85% on a test and the  right side averaged 84% on a test, would this be a significant  difference?

A. Yes B. No C. I can’t tell from the information provided 32. What percent of probability do scientists allow in their  experiments for statistical significance?

33. The building blocks of the nerve system are

34. Draw and label a Neuron

36. In intraneural communication, where does the information start  and where is it sent to?

40. Epinephrine and Norepinephrine are used (together/separately) 41. Which drug causes results that are similar to GABA? A. Cocaine B. Alcohol C. Heroine D. Xanax

43. Which is more plastic, the brain of a child or an adult. A. Adult B. Child C. Both are equal

44. What are the three types of neurons?

45. Where is the thalamus located?

1. D We also discuss several other topics like Why is it so hot in summer?

20. Whatever behavior is easiest to draw from memory is the  behavior you’re most likely to have. 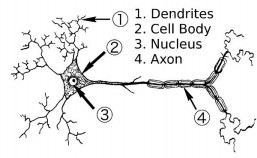 What are the goals of advertising?

What is the basic element of the human body?