UTEP / Biology / BIOL 3321 / What is the punctuated equilibrium model of evolution?

“Can evolution be speeded up [over what was proposed by Darwin & the Synthetic “Theory”]?

∙ Apparently it can be: One model that emerged from this question was the Eldredge-Gould Punctuated  Equilibrium Model

o Fossil species often show long periods of no change (“stasis” = equilibrium) that were  punctuated by what seemed to be rapid evolution that transformed one species into  another. 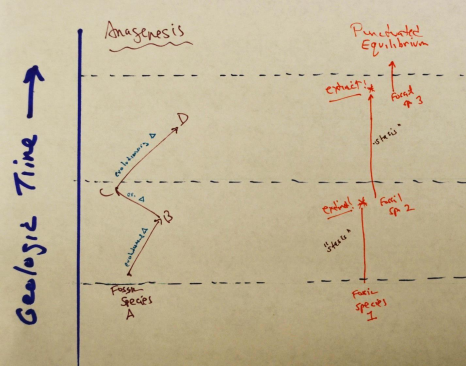 What did gould's theory of punctuated equilibrium state about the pace and timing of evolutionary change?

Don't forget about the age old question of How important are models of disability?

∙ Anagenesis – graduate change in a “paleospecies” in response to environmental changes – a single  species (lineage) is involved We also discuss several other topics like Is a salary better than a wage?

∙ Definition of microevolutionary processes: evolution at the population level.

∙ Gene versus allele: An allele is a form of a single specific type of gene.  We also discuss several other topics like What are the three organisms that reproduce sexually?

∙ For purposes of this evolution class, this convention will be used:

What type of evolution where there is a sudden rapid change then no change for a long time?

o It is named after Reginald C. Punnett, who devised the approach

▪ Co-founded the Journal of Genetics in 1910 with William Bateson

o These tables can be used to examine the genotypic outcome probabilities of the  offspring of a single trait (allele), or when crossing multiple traits from the parents o The Punnett Square is a visual representation of Mendelian inheritance. Don't forget about the age old question of What is the national security act? 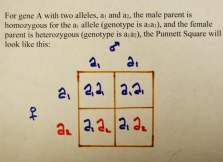 ∙ Phenotype: what is expressed by a genotype

∙ Genotype: actual allelic composition that an individual possesses for a gene

o Recessive alleles are not expressed in the heterozygous condition.

o The phenomenon of dominance, when it occurs, is a general adaptation.

∙ Complete recessivity: The phenotype of the heterozygous genotype shows no traces of the phenotype  of the homozygous recessive. Don't forget about the age old question of Define scarcity.

∙ Semidominance (aka Incomplete Dominance): There is a “dosage effect” to possessing an allele so that  the heterozygous phenotype is intermediate between either homozygous phenotypes. o Example in carnations, there is a red flower phenotype caused by a homozygous  dominant allele, and a white flower phenotype caused by a recessive homozygous  genotype. The heterozygous offspring are pink. If the pink carnation plants are crossed  (interbred), the offspring will be ¼ red, ½ pink, and ¼ white.

∙ Codominance: Each allele is expressed at is full value in the heterozygous condition. This type of  dominance is probably very common in nature.

∙ Polygenic traits: genotypes that result in phenothypes that are governed by more than one gene (classic  example, height in human beings)

∙ Penetrance: variation in the degree of phenotypic expression. E.g., polydactyly in human beings,  governed by a dominant allele, has incomplete penetrance.

∙ Where do alleles come from?

o The mutations that concern us here are those that occur in the gametes (or progenitor  cells of gametes) prior to fertilization and zygote formation in sexually reproducing  multicellular organisms.

o Mutations that occur in the non-gametes, the somatic cells, (in sexually reproducing  organisms) have little effect on evolutionary processes.

o In asexually reproducing multicellular organisms, mutation in somatic cells may have  such an effect (but it is unlikely).

o Also, there can be evolutionarily important mutations in other sorts of propagules  produced by meiosis (e.g, spores).

∙ Mutations can be induced experimentally or accidentally by exposure to “mutagens.” But these are  usually not important as an evolutionary factor in wild populations.

∙ Technically, all genes are subject to mutation. It is a spontaneous process independent of natural selection and independent of the mutations effect on fitness.

∙ So a1 may mutate to a2 at one rate, but the back mutation rate from a2 back to a1 may well be different. ∙ Mutation rates are not large numbers

∙ Mutation rates are inversely related to the size of the genome – the smaller the genome size, the  greater the observed rate of mutations.

∙ Mutations specifically alter the production of macromolecules. Some macromolecules are very  sensitive to mutations, and the slightest alteration in them result in a non-functional molecule (and a  dead gamete). Other macromolecules can withstand considerable mutations and still keep functioning  normally

∙ Substitutions in the genetic code: These are one type of “point mutations” that may be selectively  neutral in many cases (Kimura’s neutrality hypothesis).

o Or they will have very slight phenotypic effects. A point mutation involves only a single  nucleotide.

o Substitutional changes that cause no change to the code-specified amino acid are  called synonymous or silent mutations.

“redundancy” of the genetic code.

o There are other considerations, such that substitution of an “A” for “T” occurs 10%  more frequently than an A to a C or an A to a G.

∙ However, a substitution that results in a “stop codon” being formed may well be a lethal mutation  because in terminates transcription of the amino acid.

o A substitution that results in a different amino acid being placed in the sequence may  or may not have an effect on the biomolecule produced – it can be acted upon by  natural selection for good or ill.

∙ Effects of substitutions can be anything from complete lethality to complete neutrality for a gamete. o If the biomolecule being formed has a high tolerance for nucleotide substitutions, then  a large mutation rate for that mutation will be detected.

o Intolerance results in detection of a slow mutation rate.

∙ All macromolecules will accumulate neutral mutations at the nucleotide level over time. Therefore,  the nucleotide sequence that is present in any of genes right now will be different in those of your  descendants 1000 years from now.

fibrinopeptides, and greater than the rate of cytochrome C

∙ The rate of evolution in each type of biomolecule, however, seems more or less constant across all  diploid organisms that have inherited the original nucleotide sequence from a common ancestor (we  call these homologous sequences (specifically, orthologous sequences).

(including nucleotide sequences) that are inherited from a common ancestor.

o In all of these, the word applies to an either-or condition, and is never an expression of  relative similarity.

∙ These observations about the rate of evolution have fueled a concept called the “molecular clock.” o The “clock” is based on the observance of differences between nucleotide sequences  (or differences in amino acid sequences) for homologous proteins in evolutionarily  divergent species of organisms that share a common ancestral species.

o One can infer how long these species have been diverged (separated) as distinct from  each other (that is, their ancestral species).

o Human beings versus chimpanzees, gorillas, orangutans, other primates can be  compared biomolecule by biomolecule. Or animals and fungi can be compared.

∙ Calibration of the ‘clock’ is heavily dependent on inferences made from the fossil record of organisms.

Other Types of Mutations

∙ Deletions and insertions: These cause the notorious frame-shift mutations that usually have a  dramatic impact on the amino acid chains that derived from a nucleotide sequence. They may be point  mutations (involve a single nucleotide), or may consist of sequences that are thousands of nucleotides  long. Effects of major mutations like these are often only detected when they involve regulatory  genes.

∙ Inversions – Reversal of the nucleotide sequence (entire gene on the chromosome). ∙ Translocations – moving pieces of chromosomes or entire genes from one chromosome to another. ∙ Duplication – mutations that duplicate an entire gene – an extra copy is produced.

o These can have evolutionary consequences – The duplicated gene basically is a back-up  copy of the original of the gene in the gamete.

o That back-up may accumulate non-neutral mutations at a greater rate than the  original.

o There are several instances where gene duplications have apparently occurred in  various lineages of organisms.

o Example: Lactate Dehydrogenase A and B. LDH-A and LDH-B are present in all  vertebrate animals, and are the result of an ancient gene duplication. There was a third  gene duplication in LDH that occurred in derived fishes (teleosts), LDH-C. LDH-A in a  species is orthologous LDH-A in another species. LDH-A in an organism is paralogous (not truly homologous) to LDH-B in another organism.

∙ Robertsonian mutations. A general type of chromosomal mutation, the most frequently cited as  being important to evolution of populations are centromeric fusions and centromeric fissions. These  mutations affect the diploid number in gametes.

∙ The Robertsonian mutations are detected by the study of the morphology of chromosomes as they  appear during their most condensed state during Metaphase. Often karyotypes are used for these studies.  A karyotype is an image of the chromosome complement of a diploid organism’s cells when the  chromosomes are most condensed. 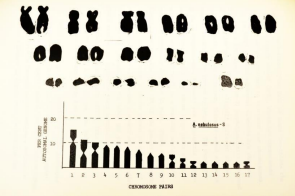 Examples of karyotypes from lizards

∙ In the above lizard species, there are three pairs of large, X-shaped (“bi-armed”) somatic chromosomes  in this karyotype. Compare with this next karyotype from a different species: 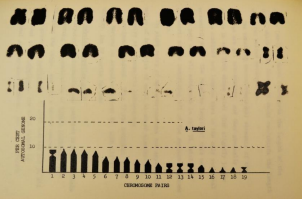 ∙ In this species, only one large X-shaped somatic chromosome is present

∙ Robertsonian centromeric fissions to Xshaped chromosmes (pair 2 and pair 3 in the previous species)  have produced to new sets of V-shaped chromosomes in this second species.

Other Types of Chromosomal Mutations

o If this n+1 gamete is fertilized by a normal haploid gamete, then a 2n+1zygote will  form.

o Even if the aneuploidy zygote survives, it will develop into an organism (plant or  animal) with reduced fitness.

∙ Polyploidy: an extreme case of meiotic failure, where all of the chromosomes go into one daughter cell  at Meiosis I, and the other cell gets no chromosomes.

o This phenomenon is called complete non-disjunction of chromosomes.

o The resultant gamete will be diploid (2n), not haploid.If the diploid gamete is fertilized  by a normal haploid gamete, the zygote will have three sets of chromosomes, a

o Triploid zygotes that survive (and many will) will usually be sterile as adult – because  the sets of chromosomes interact poorly when the adult triploid tries to use meiosis to  produce its gametes.

o Triploids have reduced fitness (and most are sterile, if they are sexually reproducing  species).

∙ “The paradoxical nature of mutations”

∙ Some mutations are lethal to those that possess them – these can be difficult to detect if they kill the  gametes or the zygotes in the early stages of development.

∙ Most mutations seem to be “bad” (the official term is deleterious) in a particular environment. ∙ But, since mutation is the ultimate source of variation in populations, they cannot always be  deleterious in every environment.

∙ Many detectable mutations produce recessive alleles, so that potentially deleterious alleles, and  potentially favorable alleles, are masked by the phenotype of the dominant allele on the other  homologous chromosome.

∙ The appearance of a mutation upon which selection can act (that is a non-neutral mutation) is not  teleological.

∙ There is no such thing as “directed mutation” in nature. Some aspects of mutation are non-random o Example: the point mutation from A to T being more frequent than the others ∙ However, appearance of a favorable mutation or an unfavorable mutation at the individual level within  a population is apparently completely random.

∙ Therefore, there can be no “selective pressure” for a favorable allele to appear in a population – no  matter how much the population might “benefit” from having it appear.

What is a positively charged ion (+) formed when an atom loses one or more electrons?

How to use the indirect method?