You can bet I'll be grabbing Naida studyguide for finals. Couldn't have made it this week without your help!

What is Modern? …”too complex”

○ Contemporary → Con (with) Tempor (time) = Concurrent in time or occurring at the sametime.

○ Spain, Portugal, and Dutch Republic (“Europeans”) were the first to embark on global exploration/ambition.

What made scientific revolution so important to have affected the early modern period so greatly?

■ they had access to the Atlantic Ocean, advantage in geographic features ○ “New Age of global (ocean) exploration”

■ Kick start to modern world as a result of trade. 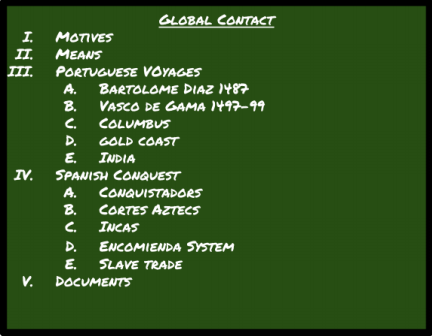 I. Motives: Why did they do it?

Who is the creator of everything?

A. gold, silver, $$$ Don't forget about the age old question of There is more evidence of somali history where?

B. convert people to christianity → catholicism: “religious zealots” live to spread, evangelise catholicism so everyone could be saved.

■ Europeans were living on bread and survived on a bland diet before refrigeration and perishables.

A. Europeans invented the compass → a reliable instrument that shows direction while sailing. We also discuss several other topics like How to solve equilibrium problems?

B. Caravels → galley, self propel with sails, more seaworthy and movable, also had cannons.

C. Better Maps → medieval maps were not accurate and thought that the world was smaller.

D. Astrolabe → was used by sailor in the early 1400s, sailors used this tool to find the position of the sun or the North Star above the horizon, then they consulted tables to determine their location in the ocean. Don't forget about the age old question of What does surface tension mean?

A. Bartolomeu Diaz went as south as possible to get to India

■ Doesn’t make it to India

B. Vasco de Gama went south to go east (Portugal Strategy to get spices) ■ makes it to India

■ results to Europe sending fleets of ships on this voyage

C. Christopher Columbus went west to prove that you can navigate the long way around to get to India (Spanish Strategy to get spices)

■ no countries in his way

■ ran into the Americas, thought it was the outer islands of India.

■ discovered the world was round

B. Cortes and an army of 600 men took over Aztec Empire We also discuss several other topics like Do collinear points lie on the same line?

■ out numbered but had many advantages:

D. Encomienda System If you want to learn more check out What is responsible for water's high heat of vaporization?

■ those who followed Cortes, Columbus, etc. (Conquistadors) were given land on the new world.

■ est. rule/authority over Native Am. land

■ agreed to teach Native Am. christianity, and “worked them like dogs” (slavery)

■ primary source photo’s show the extreme brutality of how the

conquistadors killed the Native Am. population

b) slow painful deaths Don't forget about the age old question of What is the meaning of rapid depolarization?

■ labor crisis after destroying slave labor supply after disease and

■ finds another population of slaves “African Slaves” to replace the N.A. pop. (by millions) on slave ships

a) cruelty: stench, vomit, waste, packed no more than an inch on

■ when arrived to new world were sold like cattle

■ French man writing to French gov’t to improve the French slave trade. a) they dont have the a good map to africa

■ French is doing trade with Kilwa

a) their deal: French → 200 Kilwa worriers, exclusive rights of slaves

Kilwa → protection from Arabs and Portuguese (they were

■ had an sophisticated society and politics

■ depicts the racists image the Europeans had towards them 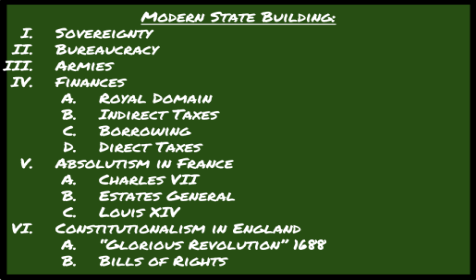 ­ During the Middle Ages the Nobles (lords, dukes, kings, knights, counts, duchess, barons, princes, earls, queens) had all the power and the Church (Roman Catholic:

­ Church had land and religious authority → baptism: original sin (Adam and Eve) ­ Relatively, in the Middle Ages, a lot of people had power.

­ Early Modern Kings believe they had absolute power. How did the exclude others from power? → Able to declare sovereignty.

A. containing all power, ability to make laws, “self­govern”, kings are above the law. II. Bureaucracy

B. the kings bureaucrats can be 1000s, they do heavy lifting and administration of state.

1. they became skilled by Liberal Arts and Sciences college.

A. The right to make was exclusively to the kings

1. building bureaucracies and new armies were expensive to maintain

2. kings were in desperate search for gold to build the new armies

3. warfare is as expensive now as it was then

4. kings needed to pay for diplomatic courtship as was well as castles, feasts, parties (ie: french palace of versaille)

their large estates and keep their kingdoms running. (Fugger and

but still not enough.

D. direct taxes: directly taken from you by the gov’t.

a) problem: subjects thought King should not tax and live off of their

own revenue and pay for their own expenses.

b) caused development of two gov’t:

A. gave them the right of direct tax without consultation

B. ie: Charles I → tried to force British Parliament to pay taxes, refused and had the King assassinated. Replaced by Mary and William (agreed to share power → constitutional monarchy)

● James VI of Scotland, becomes James I of England to replace the queen of England. ● U=V in early modern english

● Alternative title: “Or the Reciprocal and Mutual Duty betwixt a Free King, and his naturall subicilles”

○ Or → you have a choice between two titles

● “free” is repeated in both titles, emphasizes that the King is free

● printed in the capital of Scotland (Edinburgh)

○ king is above the law, offers two examples of their relationship:

What was the scientific revolution? And what made it so important to have affected the early modern period so greatly?

­At first science was based off of religion and church (in the medieval world) ­Now, the bible is no longer the authority of knowledge (in the early modern period) 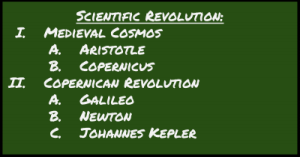 1. The earth is at the center.

2. “Christian Mythology”: God → the creator of everything. Infinite all

powerful. Angles → saved souls. Pushes the planets around the earth.

c) Lunatics­ raised by the moon

3. Why are humans in the center?

a) Superior: Humans are experiencing the greatest drama of god’s

b) Humans needs to be saved are born with sin (Medieval thinking).

1. Sun is in the center→ reposition of the sun and the earth 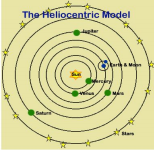 2. Priest/ member of the church, face was on polish currency.

3. Waited till his death to publish

4. Used a telescope to discover the alignment in hopes of making a more accurate calendar to figure out when to pray and improve the church.

1. Didn’t​invent the telescope but made his own

2. looks first at the moon (sees craters, shadows, and textures

3. looks at jupiter next (sees moons of jupiter)

● Discovers that all items fall at the same (constant) rate

● Object in motion will stay in motion until stopped by an outside force.

● Angels are ruled out of being responsible for orbiting the Planets

● It is the rule of motion that is responsible for orbit

3. earth has a great gravitational pull

4. force of attraction is a mathematical equation that happens everywhere and all the time

5. why is gravity significant for modern science?

a. Orbit is a result of gravitation

c. The planets orbit the sun at different times (lengths of time)

○ accept nothing as true unless you know it’s true

■ deduction­ in order from simple to complex

■ induction­ empiricism (ie: all leaves are green, have veins, all have stems in general all share common properties)

In what year rome destroys carthage?