Description: February 1 - 5, 2016 Lecture Notes featuring topics about avian/birds form and function, zoonotics, and a guest lecture on reptiles. February 1st includes my discussion notes as well, hopefully they will help. Thank you for viewing my notes, good luck in the class!

i. Look at physical attributes to see what their purpose is

ii. Not good pets technically, not legal in California

1. Evolved in the desert, which translates into water

3. Monogamous, which means in a natural situation they

tend to pair for life

a. Contrasts with domestication, which favors random

b. Humans insert themselves into animal relations,

thus will breed outside their “monogamous”

Why do birds usually hide their illness?

5. Worry that gerbils can be a problem for overrunning the

population since they will work well in California

6. Careful with tail, can cause tail slip  skin on tail will come

off when handled incorrectly

i. NOT A RODENT

1. has qualities similar to rodents though

ii. look at anatomy and skeletal structure to indicate differents

1. From a species of common ancestor

2. Important geological information due to temperature

How are most animal flus transmitted?

over 85 degrees Farenheit, especially those that are

obese We also discuss several other topics like What does john watson propose about human behavior?

b. Needs to be temperature control

1. Good to be paired when put into a home

2. They ARE territorial though

vi. Believed to be domesticated in Rome

3. Skeletal structure evidence Don't forget about the age old question of What was significant about the 1919 supreme court decision schenck v united states?

a. Rabbit vs. Cat

i. Rabbit will use speed to get away

iii. Hind leg used for propulsion in speed and

iv. Easier to control and better stability due to

the vast amount of area the hind leg uses

v. Rabbit – 8% weight is skeleton If you want to learn more check out What is the p-value approach to finishing a hypothesis test?

2. But since it’s so lightweight, it must be

3. Can hyperextend their spine if they

push off their hind legs without a

vii. Do not handle via ears

1. Ears are important for hearing and also for controlling

ii. NOT LEGAL IN CALIFORNIA

2. Worried due to the fact that they are carnivorous,

a. Will affect the avian population in the wild

3. Long body can make ferret able to easily escape and

1. Which is related to the skunk family

a. Believed to be used for rodent control If you want to learn more check out What are the 4 basic characteristics of culture?

a. The nearest living animal to a bird is a crocodile

1. Shows quality of both reptile and avian characteristics

1. Decrease drag  streamline We also discuss several other topics like What is mendel’s law of independent assortment?

1. The flap of the wings that enable flight

a. More weight means more power needed to lift up,

a. 36 pound mass of flapping power is the biggest

iv. In order to fly

a. General lightening of body weight

a. Especially in spine, skull, and

limbs We also discuss several other topics like What are the three critical roles of marketing research?

b. Also has fused bones

3. Bones are hollow but strutted, which

a. Some bones are pneumatic,

which means filled with air that

iii. Does not have a bladder  decreased weight

1. They excrete more of a paste as a

combination of excrement and urine

iv. Lay eggs  do not need to carry child

1. Gonads regress when not reproducing

v. No teeth or lips

1. Heavily enforced jaw and muscle if

you have teeth  adds on body weight

2. BUT birds don’t have that

i. Although very homogeneous in characteristics

I. Form and Function

a. Form = the animal’s makeup

b. Function = motion permissible due to the form

a. Constant balance of propulsion and equilibrium

b. Many things affect how an animal moves

a. Shoulders well laid back

b. 90 degrees angle between shoulder and humerus

a. Dogs that hunt by sight and speed: greyhound, afghan hound,  deerhound, etc

e. Shoulders not as laid back  deep chest

a. Regularly repeated manner of moving the feet

I. Avian Form and Function

i. Minimize the drag, lifting of the wings

i. General anatomical requirements for flight

a. Muscles of the bird can account up to 50%+ of the  body weight

a. The muscles attached can move in a flapping  movement

b. If not modified muscle would rip off the bone 5. Accentuated vision and balance

a. One way to think about this situation is the steering wheel and controlled mechanisms in car

i. Now look at a cockpit in a plane, it’s much

b. Through this accentuation it allows the bird to be  able to fly in balance

c. Ostrich example: their eye is the biggest in the  terrestrial mammals

i. Birds with 5 cones in their eyes, bigger

proportion of visual detection than human’s

ii. That means a bigger proportion in the brain  to synthesize the image

a. Birds need a lot more ocygen and need more  energy compared to a mammal

b. In order to achieve that amount is through an  enhanced system

ii. When they need oxygen, the air comes into  the lung  which need to go into the blood 

from the blood you need to get metabolic 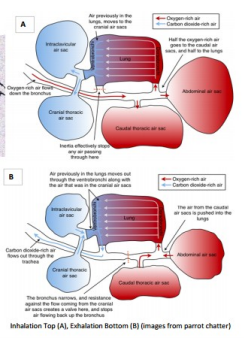 to go out the lungs to be secreted in order to

get rid of that anaerobic

1. Oxygen exchange from the air on both

inhalation and exhalation  to do this

birds have rigid lungs, human have

compressible lungs that push the air

out, where inhalation is getting oxygen

and exhalation is getting out the

gain air at all times, so air goes into

the lungs AND air sacs

2. With get oxygen through their

3. Has a bigger surface area proportion

a. Makes it easier for oxygen to

get extracted into the blood

a. In the blood vessel, it has a

b. Allows them to get the ability to

get the energy to fly

a. Rigid lungs and constant air

flow will allow it to have a

uniform position in the air

7. EXAMPLE: canary in mines, the canary

would indicate if the area has a low

a. More forward in the hip

b. Birds sit and the center of gravity will help it not fall

8. Circulation of blood is very well

a. Never really stops and thus won’t get frostbite in

a. Neck has 25 vertebrae so it’s easier to pick up

items or preen itself

i. Birds usually hide illness so flock doesn’t kick them out of the  group

ii. If a bird is shown to be sick it is REALLY REALLY SICK  go to  immediate veterinary care

a. Diseases that are specifically transferred from companion animals or  general animals that pose a health hazard to humans

i. Animals health and wellbeing is important to the animal BUT  also for the owner

ii. Approximately 30 infectious agents in both dogs and cats that  can be transferred to humans

1. We can even give the common cold to our pets

b. Rodent’s excrement can go into the air  you are in

the area and inhale such infectious virals

b. EXAMPLE: A person had a pet hamster that was sick

and when the owner died, their organs were given

to people who need them. Those people got sick

1. Which are basically diseases caused by viruses that are

replicated in the host’s body

a. In all countries (except for Antarctica)

b. Enzootic  natural wild population is a reservoir for

i. North America is enzootic to rabies

1. Which are caused by bacteria that are free living cells that

can survive outside the host

1. Yeast or mold that are specialized organisms

d. Can cause a particular threat

i. Threat is greatest in the very young and the very old humans 1. That’s because the immune system is not fully developed

in young animals and humans

2. The immune system start to fail when you get older

2. When you get an organ transplant, you get medication to

help your body not reject the organ, but your immune

system is compromised through that

a. History and the snake

i. Although reptiles are in a bad stigma and we are trying to get rid of that, there are venomous snakes that can harm humans

b. Reptile Diversity – all have scales

i. Snake and lizards

1. Don’t know what their closest living relative is

2. We do know they are reptiles though

1. Very similar to birds compared to other reptile

iv. Birds are related but they are not reptiles

1. They have too many different characteristics

i. Locations they can live in – all but the poles

a. How to distinguish fish, amphibians, & reptiles

i. Cold-blooded vs. warm-blooded

measured body temperature of a variety of

animals and realized that a specific group

has a higher temperature than other groups

1. But they did this in a cold, dank room

1. Homeotherm that has a constant

2. Poikiliotherm that does not have a

2. Ectotherm does not produce their own

heat and need to get heat in the

a. How we best describe thermoregulation in active

i. Behavior: pressed against dark rock,

1. Blood will go to the back where the

heat is hitting then circulate

i. Behavior: escape into the burrow

i. We have a maximum and minimum

temperature needed to maintain or else we

b. To maximize performance

i. If you have a 100 degree F temperature you

can’t perform well, not even run or eat

control the temperature, then measure how

fast they can run in that temperature

iii. Need to maximize performance since an

animal can be hunted and killed if not

4. Let reptiles have a choice in temperature with

1. Too much variety that needs different accommodations 2. They are not “domesticated” to the tanks they live in

How do personality traits correlate with success?

What are the steps of a trial?