The basis of perception.

∙ Dualism: The idea of mind and body

∙ “I think, therefore I am”

∙ Monism: Mind is a manifest property of the physical matter of the brain

∙ Bottom-down processes: Building percepts from elemental  senses, influence from a neural base

The Myth of five senses

The basis of perception

∙ Sensation: The registration of physical stimuli on sensory  receptors.

∙ Transduction: The process of converting a physical stimulus into  an electrochemical signal

∙ Neural Response: he signal produced by receptor cells that can  then be sent to the brain

∙ Aftereffect: a sensory experience that occurs after prolonged  experience of visual motion in one particular direction 19th century:

∙ The doctrine of specific nerve energies: the argument that it is the specific neurons activated that determine the particular  type of experience

Don't forget about the age old question of taliyah guide

∙ It matters what receptors are activated, not how they are  activated

∙ Percept is based on what those receptors do

∙ Our entire consciousness is based on the activity of our  neurons

∙ Had a constructivist approach

∙ Held the belief that we must incorporate information from our  existing knowledge to completely perceive the world around  us.  Don't forget about the age old question of ∙ CD4 cells – decreasing/death – virus is attacking and killing them ∙ Why is the virus increasing over time and the immune system is not destroying the virus?

∙ Unconscious interference: perception is not adequately  determined by sensory information, so an interference or an  educated guess is part of the process this interference is not  the result of active problem solving but rather a non conscious cognitive process

∙ Weber’s law: a just noticeable difference between two  stimuli is related to the magnitude or strength of the

∙ Psychophysics: the study of the relation between physical  stimuli and perceptual events

∙ Goal was to describe sensation/perception in mathematical terms

∙ You cannot understand perception without organization ∙ Law of common fate: we can only interpret sensory info in  holistic ways or concepts. Objects with common motion  (fate) are grouped together

∙ Info is collected by sensory processes and then flows to a  variety of modules that decode info, interpret, and allow  organism to act on it.

∙ Brain is parallel: many processes can be occurring  simultaneously

processing which says that sensory info is sufficient

 Research Methodology:  We also discuss several other topics like What happens in the brain?

∙ Psychophysical scale: a scale which people rate their  psychological experience as a function of the level of a physical  stimulus

Ex: Scoville scale- measures our detection of the amount  of an ingredient called capsaicin in chili peppers

∙ The study of human sensory systems starts with psychophysics.   The Measures and Methods of Psychophysics

∙ Method of limits: stimuli are presented in a graduated scale, and  participants must judge the stimuli along a certain property that  goes up or down

o Ex: A participant may be presented with an increasingly  dimmer set of lights. The participant is asked to tell when  the lights are no longer visible

dimension) and descending (stimulus gets smaller) series  is used.

∙ Method of Constant stimuli: A method whereby the threshold is  determined by presenting the observer with a set of stimuli,  some above threshold and some below it, in a random order o Stimuli is given in a random order We also discuss several other topics like soc 104 ku

o Prevents observer from being able to predict the next  stimulus

o Reduced errors due to habitation

∙ Method of Adjustment: method whereby the observer controls  the level of stimulus and "adjusts" it to be at the perceptual  threshold Don't forget about the age old question of Who invented and used the early microscope to discover the cell?

o Great variance from one participant to the next

∙ Magnitude Estimation: a psychophysical method in which  participants judge and assign numerical estimates to the  perceived strength of a stimulus

∙ Signal detection theory: the theory that in every sensory  detection or discrimination, there is both sensory sensitivity to  the stimulus and a criterion used to make a cognitive decision

o Relationship between sensitivity and criterion 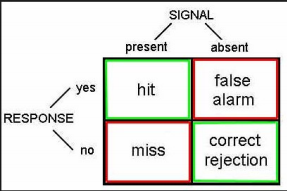 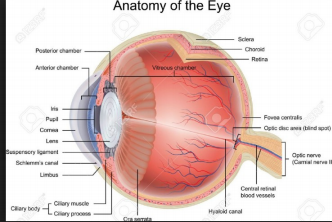 ∙ Reflected light enters eye through the pupil and is focused on the retina by the cornea and the lens. The retina contains specialized cells called rods and cones which transduce light energy into an  electrochemical signal which is then sent to the brain for  processing through the optic nerve.

∙ Part of the world you can see without eye movements.  Approximately 190 degrees horizontally and 140 degrees  vertically

∙ Clear front surface of the eye that allows light in

Sclera: Tough membrane which provides protective covering for  the eye

Anterior chamber: fluid-filled space between the cornea and  the iris

Iris: colored part of the eye, muscle that controls the amount of  light entering through the pupil

Pupil: an opening in the middle of the iris

∙ Light enters through the opening

∙ Process not directly under conscious control…known as  pupillary reflex

∙ Pupil can range from 2mm to 8mm in diameter

Posterior chamber: space between the iris and the lens which  is filled with aqueous humor fluid.

∙ Ciliary muscles: muscles connected to the lens through which  accommodation is controlled. Can contract and increase

∙ Zonule fibers: the ciliary muscles work together with these fibers  and connects lens to choroid membrane

∙ When looking far, lens relaxes which allows us to look at a  distant object

∙ When looking near, lens contracts which allows you to focus  The Retina

∙ The retina is the eye’s photosensitive surface

∙ Goal of other parts of the eye is to focus an image on the retina ∙ The retina is thin and composed of several interconnected layers ∙ The retina is in the location where transduction takes place ∙ Starts the process of transmitting visual information to the brain   The receptors: rods and cones

∙ At the periphery of retina ∙ Very light sensitive

∙ Specialized for night vision ∙ 120 million in each eye

∙ Only one type

∙ Sees only in shades of gray  (black to white)

∙ No rods in fovea

∙ Clustered at the fovea

∙ Responsible for color vision ∙ 7 million in each eye

∙ Rods and cones are equipped with the ability to convert light into a neural signal by using photopigments.

∙ Hyperpolarization causes receptor to release less of the  neurotransmitter

 The Duplex Theory of Vision

∙ Sensitive to under 500 nm ∙ Convergence: is the pooling  of information happens

greater for rods than for

∙ Many rods connect to one  retinal ganglion cell

∙ One cone usually connects  to one ganglion cell which

maximizes the ability to

pinpoint the source of light

∙ Only about 1.1 million ganglion cells

∙ Most ganglion cells receive inputs from many different

∙ As you move away from the fovea, ganglion receptive fields get  progressively larger which allows greater convergence and  greater sensitivity to dim light

The Optic nerve and chiasm 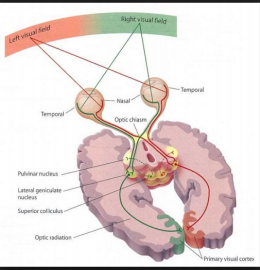 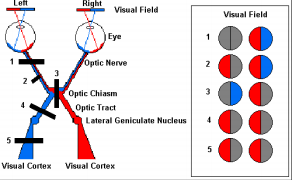 ∙ Contralateral representation of visual space occurs: this is  opposite side organization in the visual system, the nasal

retina projects to the opposite side of the brain

∙ Information from each eye goes to both hemispheres

∙ Once optic tract has left chiasm, 90% of axons make their way to LGN of the thalamus

∙ This is important for us to construct a 3-d image

to light but not

under each of the

∙ Main function is the control of rapid eye movements

∙ Saccades: sudden eye movements used to look at one object  from another

∙ Is an organ of multisensory integration

∙ V1 (Has retinotopic map of the retina)

∙ Fovea has larger cortical area than the periphery

∙ Simple cells: neurons that respond to stimuli with particular  orientations to objects within their receptive fields.

∙ Like cells in LGN they have clear excitatory and inhibitory  regions

∙ Neurons in V1 that respond optimally to stimuli with particular  orientations

∙ Unlike simple cells they respond to a variety of stimuli across  different locations.

∙ Complex cells do not have a peak location sensitivity like simple  cells do.

∙ Blobs are areas within V1 sensitive to color

∙ Interblobs: areas sensitive to the orientation of an object ∙ Layer 4B cells

∙ Seems to be involved in representation