Eve of Colonization in America

o Pueblo people live along the Rio Grande valley after them^

∙ Closer to the interior, the 5 civilized tribes

In what year columbus died?

o Tension and warfare between the nations

o Controlled this with the Iroquois Confederacy

 Ritualized exchanges and gifts to compensate for bad doing

o Deganawida or Skennenrahawi the Lawgiver

Who is an early explorer of silk and spice trade routes?

If you want to learn more check out Who gets military command for a shot at military glory?

European Communities prior to Columbus

∙ Will bring new pathogens and are introduced to new ones

o Did not own their land

o Commanded labor service- few days a week you will have to tend the  lords fields and animals etc. also you owe him a tax/ tribute

o Catholic church was one of the largest landlords

∙ Catholic Christians up to 16th century We also discuss several other topics like What antonius declares when he dies?

o Want you to Focus on reward at the end, not how shitty your life is  now

∙ 1/3 of babies did not live to 5 years old. ½ did not make it to adulthood ∙ The Black Death

o Advancements from this allowed for population rebuild We also discuss several other topics like Suppose that a cow is considered sick if her temperature is in the top 5% of all temperature readings. find the temperature value that corresponds to a cow is sick.

o Monks preserved ancient texts, brought them to spark the renaissance  Invention of the postal system, growth of universities,

celebration of the human body, spirit, and intellect

 Thought to make something of yourself now, instead of waiting  for heaven

o Gaps in the legal system from people dying

o Hurts the merchants, no one wants to buy, want to tax and rob you  Merchants support the monarchies, they have money but no  power

o Rise when the nobles and churches are struggling

o Will protect/ support merchants if they support them

o Interested in the expansion and trade of Portugal

 Faster, more maneuverable, better than any other ship

o Sail to India, then to China

o Gets idea there to sail to India instead of traveling over land o Thought that the world was much smaller and it would be faster to sail. o Him nor anyone in Europe knew of the Americas We also discuss several other topics like Who issued a papal edict condemning luther?

o Feeling good so they decided to back Columbus

o They want to develop their own trade route with Asia

∙ Brings back some of the native people- Taino people

o Says they are very smart, but they have no weapons

o Offers idea that they could be made slaves- called them Indians o Found all sorts of “Asian” spices, and found a lot of gold- both lies  Weren’t anything he recognized- only gold jewelryIf you want to learn more check out What is the meaning of maladaptiveness?

 Wants to go back

∙ Men did not respect Taino people- so they fought back

∙ Columbus decided to retaliate- enslave them, demanded a gold tax, burned  homes, and killed them

o Sent people back- many died due to disease, gold ran out fast ∙ Ferdinand and Isabella are upset with Columbus- didn’t bring what they  wanted, not interested in slaves.

 Was trying to hide/ compensate for Jewish heritage- during

 Was a fantastic lover

o Money and promise of wealth helped motivate him and his men to go o True objective- believed god wanted him to lead another crusade to the holy land and take back the city of Jerusalem from the Mors.

o Saw what he wanted- couldn’t conceive idea that there was other new  sets of values and beliefs throughout the world.

 Lack of clothing irritated him, to him clothes= civilization and if  you don’t have them you might not be fully human.

o Spend next 700 years regaining the land, on and off fighting o Spain felt superior- we can take on anyone 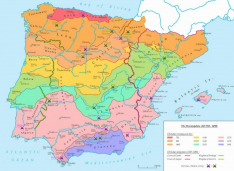 ∙ Ferdinand of Aragon and Isabella of Castile

a powerful merchant class in order to begin

exploration and expansion of power

o Martin Luther and his 95 theses

o Win people back to Catholicism

∙ F. and I. seen as Los Reyes Católicos “The

Most Monarchs” by the pope

o Gives them right to 1st right of conquest in Americas

o 1 condition: must convert natives to Catholicism in Americas o Brought people to convert them

o Hierarchy of race and class

o Wealth comes first then ancestry added next. If you’re wealthy and  powerful your ancestry is assumed as Spanish

∙ Crown still controls all in Spain and in America- realistically not practical;  small areas had leadership

∙ Encomienda: type of slavery, like serfs, areas conquered came with the  people there

o Those people do your work, you convert them and protect them o Protection and salvation for labor

o Seen as a demi-god

∙ Human sacrifice- Codex Laud: was seen as an honor, but most sacrifices were of captives

∙ Hierarchy: emperor and royal family- emperor had one official wife and could  have several mistresses. Heir was not first son, could pick from any male  relative in the family.

o Next is the nobles- sort of inherited

 Had some legal rights

 Not for forever- might work off a debt, might be a captive then  were a slave then eventually worked it off.

∙ Kids had to go to school, but they were segregated

o Could own property

o Work outside the home

 Had drainage, 1000 men a day cleaned the streets and threw it  in the lakes.

o In 2 years he overthrows the Aztec Empire

o Had superior weapons to the Aztec, Spanish War Horses,

o Had backing of the Indian people because they didn’t want to be under the Aztec Empire.

o February- August of 1521, 4/5th of the population is wiped out o Almost completely destroyed

o Search for wealth, took natives for captive, Nervias leaves behind  Cabeza de Vaca and his men there.

o Kill their horses and make boats out of the hides of them. Made 5  boats, tried to sail back to Mexico

o Taken as prisoners, escape and roam all over modern day Texas,  Oklahoma, New Mexico area. Took 10 years to get back, during this got to know Native Americans as People, even helps them

 Took an arrow out of a shoulder, prays and he is healed

 Natives see him as a friend and Holy Man

o Rescued by the Spanish by finding a search party looking for slaves.  Wrote a book that they were good people and should be respected. o Told stories he heard from the Natives of the 7 cities of gold.

∙ Didn’t do so well

∙ Hoped they could create a religious refuge in America

What is it called when a character shares their thoughts and feelings with the audience?

How is human behavior influenced?