Description: Here are the notes from the past 3 weeks' worth of lectures and powerpoints, all condensed into study-guide form!

Yes please! Looking forward to the next set!

Undernutrition­​caused by a permanent inadequacy of food

Famine­​a temporary, severe food shortage such as the Irish Potato famine or the current state of North Korea

○ Irish Potato Famine: government restricted imports but exports did not stop ○ Solution: tax on landowners → tenants could not pay tax, were evicted, which continued the entire cycle

● Stalin: expanded industry so the government adopted all decisions about it ● Farmers had to turn in land, tools, animals, etc.

When infants, pregnant/lactating women, elderly women are most vulnerable?

● North Korea: communal farms → pre­harvested personal farms in order to “beat the system”, citizens ration’s were cut, food as a weapon in form of aid from other countries ● South Africa: caused by extreme weather, consistent famine, and government “redistribution” of land

● Take action before famine gets worse

What is the difference betwen nature and nurture?

Malnutrition­ over or underconsumption of any nutrient

1. Overnutrition: consuming too many calories (ex. obesity), not just high­income countries 2. Secondary malnutrition: person eats enough food but it is digested improperly so there is a lack of nutrient absorption (ex. eating disorders, parasites)

3. Micronutrient deficiency: lack of a vitamin or mineral (iron, vitamin A, zinc) a. Fortification used to add nutrients to common foods, such as vitamin A into milk b. Can cause xerophthalmia, GI disease, goiter, rickets

Where they come from

Nitrogen fixation leads to NH3, which, when combined with carbon, hydrogen, and oxygen, make amino acids

RDA​: recommended daily allowance; amount of nutrients at which ~97­98% of population is nourished 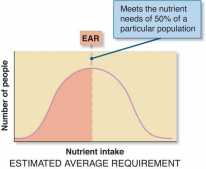 person were to just sit in bed all day

● Interviews: make a quick list (everything they ate in last 24 hours), name forgotten foods (soda, snacks), remember occasion (when/where they ate it), detail cycle (was there milk? or sugar in your tea?), and final probe (fact check)

○ Issues: subject lies or forgets, modifies diet for the day, is time­consuming and ineffective

● Anthropometry: compare subject to a reference of the same age/background; if the gap is too big, it signals malnourishment Don't forget about the age old question of i ii ii i_

■ Undernourished = too far below normal

● Normal: average height/weight of a reference person, or median

● Dietary recall (write what they remember from past 24 hrs)

○ Measure population’s protein and calorie nutrition, determine overnutrition ● Nature vs. nurture: nature determines max potential height, nurture determines the degree of height they grow to If you want to learn more check out How many chiral centers does each molecule contain?

○ Especially children: most likely group to die after the elderly

● Mothers can be malnourished, which means babies may be; breast milk is best source of nutrients for them

○ Especially due to iron and iodine deficiencies

● Heavier, taller people are less likely to be unemployed → vicious cycle of poverty

● Adequate calories in the world, but they are not distributed

● People are at risk for periods of a year, not the entire year (growing vs hunger season) ● Food crisis of 2007­08: prices shot up by 60% in 07­08 then fell almost as quickly ● Calorie deficiency does NOT always mean undernutrition

wants 3 boats, Jim wants 10, and so on...aggregate demand is

or improvement in agricultural resources

● Inferior goods​­ people consume less of them as their incomes rise

● Inelastic­​when family’s increase is less than 1%

● Food security​: access by all people at all times to enough food for an active, healthy life ● Food insecurity:​if income is less than the cost of buying food to make up for food production deficit

● Shortages­​how can they occur if quantity supplied equals quantity demanded? ○ ex. Chipotle carnitas: board says carnitas bowl is $7.25, but there is a shortage → 100 people walk in/day and ask for carnitas but there is none

○ However: at any price, supply is still 0 for a period of time → demand curve hits vertical access, no one willing to pay for it (ex. $100 for a burrito)

● Income elasticity of demand for food is 0.2 ­­­> for 1% increase in income, quantity of food demanded increases by .2%.