Description: These notes cover what is going to be on the midterm

Conceptual Scheme Relativists’ believe that truth/reality depends on the conceptual schemes individuals employ and that conceptual systems (categories) cannot be evaluated because categories don’t belong in reality‐ some things are imposed on reality, yet all categories (systems) are equally good. According to a CS Relativist, although categorizing things can be useful, some things are imposed on us, such as the air we breath; we know it is made of oxygen, but what difference would it make to us or our knowing of this fact if it were made of something else, as long as we can still breath/live on? There is an importance to conceptual systems in our understanding of reality, for example, in class we talked about the classification of whales, are they fish or are they mammals? For the longest time it was believed that whales were fish because they are aquatic animals that are fish‐like, until it was discovered that they give birth to their offspring like mammals do. Because of this difference, they are now classified as mammals. Classifying and categorizing the things in the world around us helps us understand the reality we live in and the outside sources that interact/influence it.

Why subjective relativism can be argued to be self-refuting/self‐contradictory?

Don't forget about the age old question of What is the meaning of duration in music?
If you want to learn more check out What do structural functionalists mean?

2. Show clearly in no more than two sentences why subjective relativism can be argued to be self refuting/self‐contradictory. If you want to learn more check out Which flowers are used as natural dyes for cotton industry?

How physical impossibility is used to critique pseudoscience?

is dependent on what a subject or individual believes it to be, so disagreements would be pointless. People wouldn’t bother disagreeing over the truth of claims if we were all a subjective relativist because our “truth” would be whatever we perceived it to be, while not making someone else’s “truth” untrue, since we each live in our own reality. Therefore, this argument is contradictory. We also discuss several other topics like Where did romulus set up a sanctuary for criminals?

4. Explain how physical impossibility is used to critique pseudosceince(s), in general and through an example, ESP (extrasensory perception).

Pseudoscience is a claim, belief or practice presented as scientific, but which does not adhere to the scientific method. A field, practice, or body of knowledge can reasonably be called pseudoscientific when it is presented as consistent with the norms of scientific research, but it demonstrably fails to meet these norms. Pseudoscience is often characterized by the following: contradictory, exaggerated or unprovable claims; over‐reliance on confirmation rather than rigorous attempts at refutation; lack of openness to evaluation by other experts in the field; and absence of systematic practices when rationally developing theories. The term pseudoscience is often considered pejorative, because it suggests something is being inaccurately or even deceptively portrayed as science. Accordingly, those labeled as practicing or advocating pseudoscience often dispute the characterization. Science is distinguishable from revelation, theology, or spirituality in that it offers insight into the physical world obtained by empirical research and testing. Commonly held beliefs in popular science may not meet the criteria of science. "Pop science" may blur the divide between science and pseudoscience among the general public, and may also involve science fiction. Pseudoscientific beliefs are widespread, even among state school science teachers and newspaper reporters. The demarcation between science and pseudoscience has philosophical and scientific implications. Differentiating science from pseudoscience has practical implications in the case of health care, expert testimony, environmental policies, and science education. Distinguishing scientific facts and theories from pseudoscientific beliefs such as those found in astrology, alchemy, medical quackery, occult beliefs, and creation science combined with scientific concepts, is part of science education and scientific literacy. ESP is an example of this because although tests to prove the existence of any of the ESP “powers” such as clairvoyance, telepathy, precognition, and psychokinesis. A glance at some early studies that are questionable are then explored. Next an innovative experiment involvingIf you want to learn more check out What are the major features of representative democracy?

virtual reality is examined in which significant results were not found. A study using classical conditioning follows again yielding poor results. Next an experiment carried out through the mail was cited which, again, does not yield significant results. A psychic named Uri Geller, who was popular in the 1970's is then shown to be fraudulant in his abilities to bend metal objects with his mind. Gellar is also shown to be a fraud on his proclaimed clairvoyance. Next it is shown that a large number of people want to believe in ESP phenomena and explanations are given as to why people want to believe. Neuroimaging techniques are then examined and show that there is no difference in brain activity during "psi hitting' verses 'psi missing. Ray Hyman's critique of Ganzfield experiments is then explored. James Randi is then looked upon in regard to his ESP testing website. Finally, Randi's $1,000,000 prize for demonstrating psychic abilities in the laboratory is called upon to leave the reader with no doubt that if someone had psychic abilities, this prize would have been collected long ago. We also discuss several other topics like Where country wwii impoverished citizens, reduced the population, destroyed capital?

5. Explain how faith as a “source” of knowledge (as defined in lecture/textbook) contradicts a basic feature of justification. So define faith and justification and show the contradiction.

Faith is not a “source” of knowledge because it contradicts a basic feature of justification. Knowledge is justified truth backed by evidence, whereas faith is a belief without evidence. Evidence (justification) is needed to prove knowledge, and faith cannot be proven.

6. Explain how mystical experience as an alleged alternative source of knowledge contradicts the most general and basic feature of the concept of knowledge. Define both (relevant) concepts and show contradiction.

1. Describe in general terms the concepts “theory” and “phenomenon” and give an example of both in the context of astrology.

The dictionary defines theory as, “a supposition or a system of ideas intended to explain something, especially one based on general principles independent of the thing to be explained.” An astrological example of a theory is following

the Zodiac signs; believing that the alignment of the stars influence who we are and everything we do.

Phenomenon (for philosophy/ our purposes) on the other hand is defined as, “the object of a person's perception; what the senses or the mind notice.” An astrological example of this the study of the stars itself; what we see when we observe the sky, which includes planets, far off galaxies and clusters of stars that we have named/identified to keep track of their position as our Earth moves.

2. Define the epistemological criterion of falsifiability and give an analyzed example of an unfalsifiable hypothesis from creation science.

The epistemological criterion of falsifiability is whether or not a theory is genuinely scientific only if it is possible in principle to establish that it is false. This argues that genuinely scientific theories are never finally confirmed, because disconfirming observations (observations that are inconsistent with the empirical predictions of the theory) are always possible no matter how many confirming observations have been made. Scientific theories are instead incrementally corroborated through the absence of disconfirming evidence in a number of well‐designed experiments. An example of an unfalsifiable hypothesis from creation science is the lack of evidence of the global flood [biblical], which argues that if there was this global flood, there would be archaeological evidence such as the destruction of civilizations, or a mention of it somewhere other than the bible that is a credible source, but there is no such evidence of this catastrophic event. 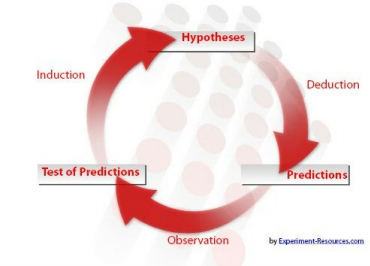 One of the most interesting discoveries of the twentieth century is that the universe is expanding; that is, the galaxies are a moving away from each other. This discovery stimulated the creation of numerous models of systems in which such expansion would take place. Two of these models were widely regarded as possibly representing the structure of the real universe. One was an explosion model (the Big Bang theory) in which all matter is originally concentrated in one place and explodes outward. The other is a steady­state model, in which subatomic bits of matter are created out of nothing and

● THEORETICAL HYPOTHESIS:​The structure of the real universe is an exploding system­ the Big Bang Theory.

● PREDICTION:​The density of matter gets less and less the farther away from the original explosion one gets, meaning that the density of the most distant galaxies should be less if the explosion model is correct.

● TEST RESULT:​​The measurements from radio telescopes show a clear decrease in the density of the most distant observable galaxies.

● EVALUATION:​This confirms the hypothesis­ The Big Bang Theory is correct in regards with that density decreases the further away one goes from the original explosion.

What is the meaning of metabolism in the cell?

What is the meaning of scarcity in economics?