WSU / Chemistry / CHM 1220 / What are the different properties of liquids?

Description: These cover the week of Feb 15

6. Classification of Solids by Type of Attraction of Units

8. Structures of Some Crystalline Solids

1. Comparison of Gases, Liquids, and Solids

a. Recall the definitions of gas,liquid,and solid given in Section 1.4. b. Compare a gas, a liquid, and a solid using a kinetic molecular theory description.

What is the dipole moment?

c. Recall the ideal gas law and the van der Waals equation for gases (there are no similar simple equations for liquids and solids).

b. Define melting,freezing,vaporization, sublimation, and condensation.Don't forget about the age old question of What are the three types of legitimate authority?
If you want to learn more check out How does functional magnetic resonance imaging work?

d. Describetheprocessofreachingadynamic equilibrium that involves the vaporization of a liquid and condensation of its vapor.

e. Describe the process of boiling.

What is the vapor pressure?

i. Describe the general dependence of the vapor pressure (ln P) on the temperature (T). j.State the Clausius–Clapeyron equation (the two­point form).

k.Calculate the vapor pressure at a given temperature.

l.Calculate the heat of vaporization from vapor pressure.

b. Describe the melting­point curve and the vapor­pressure curves (for the liquid and the solid) in a phase diagram. If you want to learn more check out Are there meaningful differences across developed democracies?

e. Relate the conditions for the liquefaction of a gas to its critical temperature. Liquid State

b. Describe the phenomenon of capillary rise

c.Describe the alignment of polar molecules in a substance.

h. Identify the intermolecular forces in a substance.

i. Determine relative vapor pressures on the basis of intermolecular attractions.

d. Determine the number of atoms in a unit cell.

8. Structures of Some Crystalline Solids

a. Calculate atomic mass from unit­cell dimension and density.

a. Describe how constructive and destructive interference give rise to a diffraction pattern.

b. Note that diffraction of x­rays from a crystal gives information about the positions of atoms in the crystal.

Solids are nearly incompressible and rigid.

A change of state or phase transition is a change of a substance from one state (solid, liquid, gas) to another. The specific name or names for each of these transitions are given below.

The vapor pressure of a liquid at a particular temperature is the partial pressure of the vapor over the liquid measured at equilibrium.

When a liquid is placed in a closed vessel, the partial pressure of its vapor increases over time until it reaches equilibrium. At equilibrium, evaporation and condensation continue to occur, but do so at the same rate. This situation, which is called a dynamic equilibrium, is illustrated on the next slide. 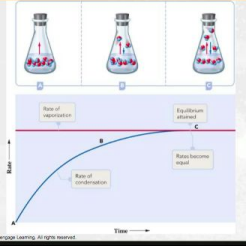 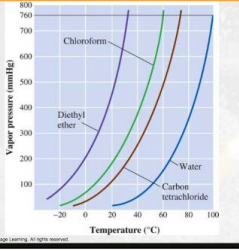 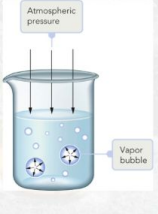 When the pressure on the liquid increases, as is the case with a pressure cooker, the boiling point increases.

Conversely, when the pressure on the liquid decreases, as is the case at high altitude, the boiling point decreases.

The freezing point is the temperature at which a pure liquid changes to a crystalline solid (or freezes).

The melting point is the temperature at which a crystalline solid changes to a liquid (or melts).

Any change of state requires that energy be added to or removed from the system. As shown in the graph, for water, there are two regions that remain at the same temperature even as heat is added. Those represent regions of phase change. 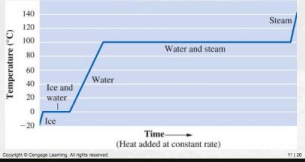 ­We can learn about IMF by studying heats of vaporization, the energy needed to cause 1 mol of liquid to vaporize

­entropy drives the process, favors the process of solid to liquid to gas ­Polar molecules are attracted to each other

­Dipole moment: a quantitative measure of the degree​…?

­We can measure the energy that it takes to condense/vaporize a noble gas (1.77 kJ/mol and happens at ­246 degrees celsius)

­In a NP molecule, the charge is uniformly distributed over time. In any ONE instant however, the charge is not uniformly distributed. In that instant, there is an instantaneous dipole. (induced dipole ­ the one molecule that is polar in that instant INDUCES dipoles, and it averages out over time to make it NP) There is a net force of attraction called instantaneous dipole, aka London forces.

­LF are the weak attractive forces between molecules resulting from the small, instantaneous dipoles that occur because of the varying positions of the electrons during their motion about the nuclei

­LF is proportional to the number of electrons, but WE use molar mass as an estimate. So look at it in terms of higher molar mass, higher LF

­More condensed structures give us weaker forces, more spread out like straight chains of carbon, give us a higher boiling point

­Heat of vaporization is the energy needed to change from liquid to vapor, without changing the temperature

­The BP is the temperature at which the VP is equal to the pressure on the liquid. At this temperature, bubbles of gas form WITHIN the liquid. The normal BP is measured at 1 atm.

­We use boiling to purify. To lower the BP (because some compounds decompose before they boil), so decrease the pressure to lower BP

­A phase diagram is a graphic way to summarize the conditions under which the various states of a substances are stable. The states are separated by lines that show the equilibrium between the states.

­The critical point gives the temperature (critical temperature) at which the liquid state can no longer exist and the pressure at that temp (critical pressure). Above this temp and pressure, there is only one state (supercritical fluid.)

What exactly are civil rights?

What is the most common mistake students make on binomial distribution questions?