STANFORD / Psychology / PSYCH 50 / What is the difference between working memory and declarative memory?

Description: These notes cover chapters 8 and 10 based off of the reading guides

● H.M.: suffered from epilepsy, surgeons removed much of both temporal lobes and hippocampi → relieved seizures, but had memory deficits

● could not remember events after surgery

● mirror drawing task: reproduce figures from mirror onto a piece of paper ○ HM would get better at task over time, but wouldn’t remember that he did the task before

● encoding: changes in strength/number of synaptic connections due to an experience ● storage: retention of memory traces over time

○ can be episodic (events) or semantic (facts) 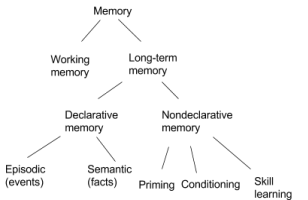 What is direct priming?

Don't forget about the age old question of Why in 1215 does the pope/church begin to lay down the law?

● priming: previous encounter of a related/same stimulus changes the processing of a stimulus later

○ ex: seeing words like “pillow” and “sleep” beforehand will make you read B_D as “bed”

● skill learning: gradual improvement in performance due to repeated practice ● conditioning: responses to associations between stimuli

● direct priming: the prime and target stimuli are the same Don't forget about the age old question of What are the steps in a test for a zero population correlation?

○ subjects look at four cards with shapes associated with future weather conditions, then predict whether weather will be rain or shine

○ subjects must use cognitive abilities to find which cards will produce a certain outcome → over many trials, accuracy will improve We also discuss several other topics like Why diploidy is an adaptation?

○ patients with amnesia learned more slowly, but eventually made about the same amount of correct predictions as control subjects

○ patients with parkinson’s (damage to basal ganglia) had trouble with task ● paired­association task: subjects learn that certain pairings of cards denote that the weather will be rain or shine

○ unconditioned response (UCR): an innate response to a stimulus

○ unconditioned stimulus (UCS): the stimulus that elicits the UCR

○ conditioned stimulus (CS): an unrelated stimulus paired with the UCS ○ conditioned response (CR): the reflex that happens with presentation of the CS ○ ex: dog salivates (UCR) at sight of food (UCS) → pair bell tone with food → dog salivates (CR) when it hears the bell tone (CS) Don't forget about the age old question of What are the two determining concepts for consumption choice?

● operant conditioning: increasing or decreasing a behavior by rewards or punishments ● acquisition: establishment of the conditioning

○ consist of networks of neurons

○ through experience, connections between neurons are strengthened as they fire action potentials at the same time

● sensitization: increased response to habituated stimulus when paired with an averise stimulus

○ looking at two pathways in hippocampus, both can be stimulated independently

○ researchers record the postsynaptic potentials that receive input from each pathway

○ when pathway 1 is stimulated by a high frequency, postsynaptic potentials are enhanced

○ postsynaptic potentials are enhanced only by input from pathway 1, not pathway 2

○ diameter and length of spine may change

○ other spines may emerge from spine or disappear

● each emotion is a discrete, independent entity

● complex emotions: shaped by culture and society, expressed by a combination of basic emotions

● each emotion is a point within two or more continuous dimensions

● argued that a bodily response does not uniquely determine a feeling (e.g., flushing of skin can indicate anger or embarrassment)

● hippocampus thought to be the integrator of emotions

● criticisms: limbic brain areas don’t have as much structural coherence such as the sensorimotor systems, damage to hippocampus shows deficits in memory but not as much on emotion

Contemporary approaches to Studying the Neurobiology of Emotion

● use of classical conditioning to have subjects associate fear to a stimulus, then observe the change in behavior and physiology

● reactivation of somatosensory patterns for a given emotion/event being recalled calls up relevant somatic markers (autonomic, endocrine, and musculoskeletal changes) and helps one make behavioral changes based on this information → leads to decision making based on past experiences

Interactions with Other Cognitive Functions

● stress hormones such as epinephrine, norepinephrine, and cortisol are secreted when sympathetic nervous system is stimulated

● these hormones activate receptors in the central nervous system → effects are slower than neural signaling, more effective during memory consolidation

● emotion regulation: how people attempt to influence the intensity/duration of emotions they feel

● cognitive reappraisal: interpret meaning of elicitor in a way that changes its emotional impact

● activity of these nervous systems can be measured by:

What is the study of earth’s physical features, processes, and history?

When is a common law conspiracy considered complete?