• Scarcity-restricts options and demands choices, resources are limited • Opportunity cost-the price you paid/the thing you gave up in order to get something • Utility-pleasure or satisfaction

• Marginal analysis-comparison of marginal benefit and marginal cost  • We assume everyone acts with rational self-interest, not selfishly

• Other-things-equal/ceteris paribus-the things that aren’t being studied are assumed to  have no effect on the results (Pepsi example-we assume we only change the price of  Pepsi, not price of Coke or taste of Pepsi etc.)

• Microeconomics-the study of individual consumers, firms, or markets (ex. increase in  the market of fashion)

• Macroeconomics-the study of the market more generally/the entire market (ex. the  unemployment of the United States)

• Positive economics-economic statements that can be true or false, factual (ex. the  economy fell 3 points yesterday)

• Normative economics-economic statements that involve value judgment, up for debate  (ex. the unemployment rate ought to be lower) We also discuss several other topics like What is truman’s point iv program?

• Economizing problem-the need to make choices because economic wants exceed  economic means We also discuss several other topics like What is cell membrane?

What is market system?

o Law of increasing opportunity cost-as the production of a particular good increases,  the opportunity cost of production of an additional unit increases (ex. additional  robot is 1/4, 1/3, 1/2, and 1 unit of pizza), you have to use less skilled resources or  more scarce materials to produce more units (resources are not interchangeable) Don't forget about the age old question of What is the difference between low fidelity and high fidelity?

▪ Believes that government intervention will lead to corruption

o Command systems-governments have total control over all economic activity ▪ Also called communism or socialism Don't forget about the age old question of Why does memory sometimes fail?

▪ Mix of government initiatives and individuals seeking economic growth through  their own business decisions, resulting in competition among producers ▪ Defined by the market as the dominant force in the economy

• Private property-extensive private ownership of capital, encourages investments,  innovation, exchange, maintenance of property, and economic growth • Freedom of enterprise-entrepreneurs and private businesses are free to obtain and use  economic resources to produce their choice of goods/services to sell them in their  chosen markets

• Specialization-using resources of an individual, firm, region, or nation to produce one or  a few goods/services rather than an entire range of goods/services

o Division of labor-specialization makes use of different abilities, fosters learning by  doing, saves time, and increases efficiency of society

o Goods that continue to make profits will be produced

▪ Dollar votes-registry of wants of goods by consumers purchases

o Goods will be produced in the most cost-efficient way

▪ Correct mix of labor and capital

o Markets are dynamic and will adjust to changes in demand by allocating more or  less resources to the good (ex. consumers desire more fruit-resources from other  goods such as vegetables will switch from those goods to fruits)

▪ Creative destruction-the creation of new products and production methods  completely destroy the market positions of firms that are wedded to existing  products and methods (ex. cassettes to CD’s to IPods)

• Circular flow diagram-illustrates the repetitive flow of goods/services, resources, and  money for a simplified economy with no government 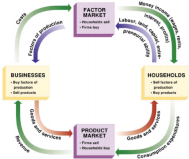 Only owners, in the market system, are liable for risk and loosing money

• Law of demand-other-things-equal, as price falls, the quantity demanded increases o Price acts as an obstacle to buyers

o Substitute effect-switching product to some other similar product that is cheaper  (ex. chicken prices went down, more chicken will be bought because people will  substitute chicken for steak)

o Only change in price can cause change in quantity demanded, movement along  curve

▪ Complementary goods-goods that are used conjointly, as price of

o Buyers-if there is an influx of new buyers, the demand for specific good will increase  (ex. baby boom increased demand for baby food)

o Expectations-consumers expectations of future prices, if the expectation is that  prices for homes will rises in the future, the demand for houses now will increase • Supply-schedule that shows the amount of supply producers are willing and able to  produce at a specific price

• Law of Supply-other-things-equal, as price rises, the quantity supplied rises o Price acts as an incentive for producers

o Prices are the only thing that changes the quantity supplied, movement along curve o Change in supply shifts curve

o Taxes and subsidies-taxes increase the cost of production and decrease supply,  increase in subsidies (money paid to producer by government) decreases cost of  production and increases supply

• Price ceiling-a legal limit on the maximum price of a product, rent control, causes  shortages because the price decreases and the producer’s profit goes down and causes  quantity supplied decrease and quantity demanded increase

Price floor-a legal limit on the minimum price of a product, cigarettes/minimum wage,  causes surplus because the price rises and the producer’s profits rise and causes quantity  supplied to increase and quantity demanded to decrease

• Unemployment-the state a person is in if he cannot currently get a job despite being  willing, able, and looking for work

• Inflation-an increase in the overall level of prices

• Savings-occurs when a person’s income, after taxes, exceeds their spending • Investment-resources are allocated to economic growth or future output or capital  goods

o Economic investment-investing in capital goods that lead to economic growth • To increase future production, country as a whole must save more for investing that it  spends which leads to trade-offs of consumption goods

• Macroeconomics takes into account expectations about the future • If investors are pessimistic about future returns, they will invest less which will slow  future economic growth

• Shocks-situations in which the expected outcome does not occur

• Inflexible or sticky prices-prices of certain goods that take time to change, mostly  inflexible in the short-run, leading industries to change employment when demand  changes (ex. most goods, newspapers, haircuts)

• Flexible prices-prices of certain goods that have the ability to change quickly (ex. corn,  oil, gasoline)

o Consumers are more easily able to plan when prices are constant, so producers keep  them steady

o Companies that are losing demand could lower price in order to increase demand,  but opposing companies will likely also drop prices when this occurs, which leads to  a price war, which will hurt the company that first cut prices so companies will  avoid price wars (ex. Pepsi and Coke)

o Over time however, prices become more flexible as employees are willing to accept  pay cuts

o A bubble is created when one market becomes the sources of savings (1500 tulips,  2000 housing market)

What is a maltose?