1. There are four types of goods in an economy.

a. PRIVATE GOODS are both excludable and rival in consumption, meaning that  it is possible to prevent someone from using it, and if one person enjoys it,  someone else cannot.

b. PUBLIC GOODS are neither excludable nor rivals in consumption, meaning that you cannot prevent someone from using the good, and one person’s use of the  good does not detract from someone else’s use of the good.

c. COMMON RESOURCES are a rival in consumption but are not excludable,  meaning that one person’s use of a good prevents someone else from using it, but  no one can be prevented from using a good.

Diseconomies of scale occurs when?

i. Ex: fish in the ocean, the environment, congested nontoll road

2. A FREE RIDER is a person who receives the benefit of a good but does not pay for it.  (Because public goods are not excludable, the free­rider is a problem to the economy  because it prevents the private market from supplying the goods.)

3. Common resources are also not excludable, but because they are rivals in consumption,  this gives way to THE TRAGEDY OF THE COMMONS. When something is  available for unlimited access, people tend to overuse the good  negative externality. If  the government steps in and makes this a private good, the problem will most likely  (hopefully) disappear.

The average tax rate is the total taxes paid divided by?

Don't forget about the age old question of What are the ways to reduce dissonance?

4. The U.S. TAX BURDEN WHEN COMPARED TO OTHER DEVELOPED  COUNTRIES is actually relatively low at only 25%. Countries such as Denmark,  Sweden and France have burdens as high as 48%, 45% and 44%, respectively.

a. After operating at a deficit for so long, the NATIONAL DEBT has grown to  trillions of dollars. Even if there is a surplus one year, it does not mean that the  national debt has gone away.

9. LUMP­SUM TAXES are the most efficient type of tax because everyone pays the same  amount of tax. There is no distortion in incentives and minimal administrative burden,  but there is also no equity.

10. The BENEFITS PRINCIPLE states that people who use a good should be taxed for  using that good and benefiting form the government’s service. For example, if you use  gas and pollute the environment, then you should pay a tax.

11. The ability­to­pay principle states that taxes should be levied on a person according to  ability to handle the burden.

a. VERTICAL EQUITY is the belief that taxpayers with a greater ability to pay  taxes should pay larger amounts, i.e. richer taxpayer should pay more than poorer  taxpayers.

i. PROPORTIONAL TAX: no matter your income, you pay the same  percentage of your income (ex: 25% tax) If you want to learn more check out What are the functions of foreign corporations in the us?

respectively) aims to decrease the differences in tax amounts

12. Tax incidence is who bears the burden of taxes. In the case of the CORPORATE  INCOME TAX BURDEN, a corporation is more like a tax collector and the burden of

the tax actually falls on the people: the corporation is taxed as a whole, and then the  workers are also taxed.

Chapter 13 Don't forget about the age old question of What is the function of desegregating public transportation, montgomery, alabama?

13. An OPPORTUNITY COST is what you must give up to get an item that you want.  a. An EXPLICIT COST is what we would normally think of when it comes to  costs; it is any input cost that requires an outlay of money by the firm.

b. An IMPLICIT COST is the input costs that do not require an outlay of money  by firms (it is more so an opportunity cost because it reflects the time or money  you are forgoing to do one thing as opposed to another).

a. Accounting profit will usually be large and positive.

b. If economic profit is negative, you did not cover you opportunity costs, but if it is  positive, you should stay in business. 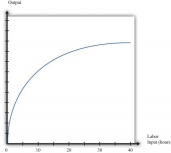 We also discuss several other topics like What is the male­ sex-role identity paradigm?

16. MARINAL PRODUCT is the increase in output that arises from an additional unit of  input (ex: the number of cookies more that you make with one more employee). a. The DIMINSHING MARGINAL PRODUCT is when the marginal product of  an input declines as the quantity of the input increase (the more cookie workers  you have, the less each person can produce, even though costs are still  accumulating). This property is reflected by the total cost curve.

b. AVERAGE FIXED COST is the total fixed cost divided by the quantity output  (AFC=TFC/Q)

c. AVERAGE VARIABLE COST is the total variable cost divided by the quantity  of output (AVC=TVC/Q)

d. AVERAGE TOTAL COST is the total cost divided evenly out over all the units  produced (ATC=TC/Q). It is also the summation of AFC and AVC

e. MARGINAL COST is the increase in total cost arising from an extra unit of  production (MC= ΔTC/ΔQ) 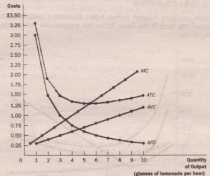 where the quantity produced will minimize ATC. This is known as the

i. When MC<ATC, ATC decreases

19. In a COMPETITIVE MARKET, there are many buyers and sellers, all products are  identical, there is free entry and exit of firms, and each person is a price taker (no one  person can influence the price of a good).

20. In a perfectly competitive market, the price line is horizontal and PRICE=AVERAGE  REVENUE=MARGINAL REVENUE.

a. In order to MAXIMIZE PROFIT, a firm should strive to let marginal revenue  (MR) equal marginal cost (MC)  MR=MC is profit maximizing level of output i. If MR>MC, the firm should increase output

ii. If MR< MC, the firm should decrease output

b. The marginal cost curve determines the quantity of the good the firm is willing to  supply at any price  it is the supply curve.

21. In the short run, a firm can shut­down and decide not to produce anything, but will still  have to pay fixed costs. This is known as a SUNK COST.

a. A firm should shut­down in the short run if TR< VC (Profit<AVC) because it  needs to make at least enough money to cover its variable costs.

22. In the long­run, a firm can decide to EXIT the market and then it will not pay any costs  at all.

a. A firm should exit the market if its TR<TC (P<ATC) because it is not covering all of its costs adequately.

b. A firm should enter the market if its TR>TC (P>ATC) because it can afford to  cover all of its costs.

c. In the SHORT RUN, the SUPPLY CURVE is located on the marginal­cost  curve above the average variable cost. (If the price falls below the AVC, the firm  should shut down.)

i. There are a fixed number of firms in the short run and each firm supplies a quantity where P=MC and when P>AVC, the supply curve is the MC

d. In the LONG RUN, the SUPPLY CURVE the supply curve is on the marginal cost curve and above the ATC. (IF the price falls below the ATC, the firm should  exit the market.)

i. In the long run, firms can enter and exit the market. 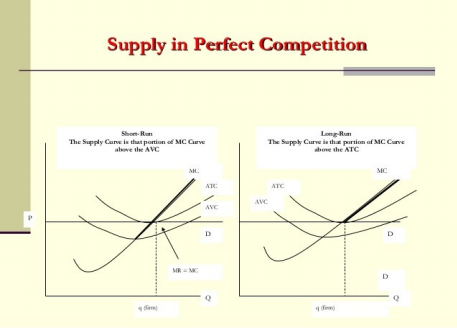 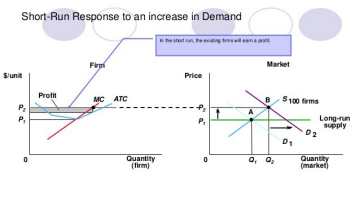 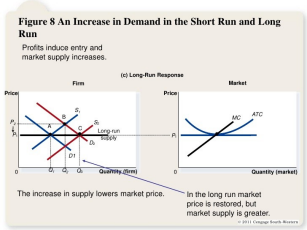 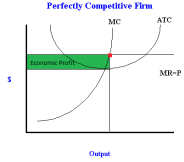 24. A MONOPOLY a market system in which there is only one seller of a product and the  product does not have any close substitutes.

a. Arises due to barriers to entry:

i. A monopoly owns the sole resources to producing a good.

ii. The government’s regulations have established a monopoly (patent,  copyright).

iii. The monopoly has the best and most efficient production process.

b. Price maker and thus has a downward sloping demand curve. 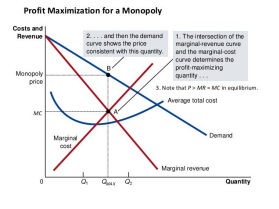 a. Where MR=MC, MC being the supply curve, is the profit­maximizing level for a  monopoly, and then you trace your line up to the demand curve to determine what the price of the good should be. From there, profit it determined the same way as  in a competitive market, profit = (P­ATC) Q.

b. Despite this calculation, monopolies choose to produce at a level where MR=MC, which is less than what is socially efficient. This creates a DEADWEIGHT  LOSS, which is measured by the triangle between the demand curve and the MC  curve. 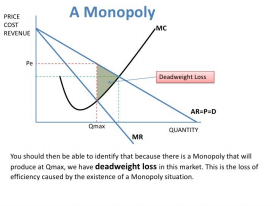 26. PRICE DISCRIMINATION is the practice of selling the same good at different prices  to different customers as rational strategy to increase profit.

a. Eliminates deadweight loss because each buyer pays what they are willing to pay  and the monopoly gets the entire surplus.

In economics, what are the types of product differentiation?

How did the evolution of more sophisticated stone tools in homo erectus provide an adaptive advantage?