CLEMSON / Physics / PHYS 1220 / What are the rules for dimensional analysis?

Course: Physics With Calculus I

1. Dimensional analysis when the dimensions of a quantity instead of the value  are used to solve a problem; this is often used to check a problem 2. Dimensions can be treated as algebraic symbols for example: a. V=l*w*h each is a unit of length so volume is equal to L3

3. The quantities can only be added or subtracted if they have the same  dimensions

4. Each side of the equation must have the same dimensions

What are the rules for significant figures?

2. When adding or subtracting the answer has the same amount of decimal  places as the number with the least amount of decimal places in the problem 3. Numbers such as e and π don’t place restrictions on results

6. When the answer begins with a 1 it is okay to keep an extra significant figure

What are the five kinematic equations?

We also discuss several other topics like What are the two important procedures that were initiated by the world trade organization?

Chances are this won’t be a huge factor in the final but it’s still a handy thing to  know. 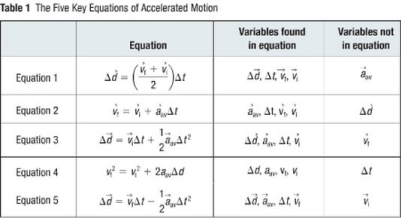 These are very similar to the translational ones except d=θ, v=ω, and a=α. A very useful formula to use to work between the two formulas is: v=ωr

1. “Every body continues in its state of rest or of uniform motion in a straight  line, unless it is compelled to change that state by forces impressed on it.” 2. F=ma

∙ Position: r=xi+yj+zk We also discuss several other topics like What is an example of an intangible service?

Drawing a picture is especially useful when given a problem that involves multiple  forces. This will add a visual that will help with understanding the math you’ll be  doing. Don't forget about the age old question of What is the key issue of developing a county?

∙ax=FT−Fk Don't forget about the age old question of What is the 1913 alien land act?

o FT- The force of tension Don't forget about the age old question of What argument does russell use to defend his claim that the “sense-data” we are immediately aware of in sensory experience are “signs” of external objects rather than the external objects themselves?

o b- the experimental constant. It is negative to show it’s moving  opposite velocity (v).

∙ For the drag force on blunt objects (What we mostly will work with) drag force is shown by:

o ρ- The density of the medium

A- The object’s perpendicular cross-sectional area

o v- The speed of the objects

The magnitude of centripetal force is found by:

If the origin is in a polar coordinate system

3. This answer comes in Astronomical Units or AU

o Were only going to consider the first and the third since they’re the ones  formulas apply to.

o This answer is in Joules

o The sum of a systems Potential and Kinetic energy is its mechanical energy.  This is shown by:

o The conservation of mechanical energy is shown by:

o Momentum moves in the same direction as velocity and is given  by the equation:

o The initial momentum is always the same as the final momentum.   In the problems that ask for recoil motion use the following  formula often times in momentum problems they are paired with  translational kinematic equations:

An open systems is a system that gains or loses mass.  This is the  formula to us for the rocket or a similar system:

Torque can also be found by taking the cross product of two vectors.   The magnitude of Torque is given by:

Inertia is the torque divided by the angular acceleration.

Rotational inertia can be found by:

M is the mass of the particle

r is the distance from the rotational axis

On a continuous object the rotational inertia is:

The center of mass is found by:

Ki­ is the translational kinetic

Newtons second law is shown through torque and is the sum of all  torque.

Two conditions need to be met for an object to be at equilibrium: 1. Ftot=dpdt Ftot=0

These are all that is needed to solve and equilibrium problem.  To  determine the radius for the torque always set a reference point for the  initial radius.  I think this is easier if an endpoint is chosen.

You may need to know this for torque.

The discriminate of each matrix is found. (ac-bd) So the answer to this problem is k.

Most problems can be solved using the following two equations in some fashion: A1v1=A2v2

Think back to conservation of energy to use this one. It’s the same thing. This  formula can also be used for flowing air.

Did you get to choose who you are?

Can you live a long life with cystic fibrosis?