GSU / History / HIST 1111 / Describe the effects that the black death had on europe culturally, re

Describe the effects that the black death had on europe culturally, re

Describe the effects that the black death had on europe culturally, re

Course: Survey of World History to 1500

Description: THIS IS THE STUDY GUIDE FOR THE EXAM

Describe the effects that the black death had on europe culturally, religiously, and politically.

10 geography questions (3 points each): Match the number that corresponds to the location in the description

5 IDs (8 points each): Write 2­3 sentences defining each term and explaining its historical significance

2 Essays (15 points each): 5+ sentences answering the question or questions. 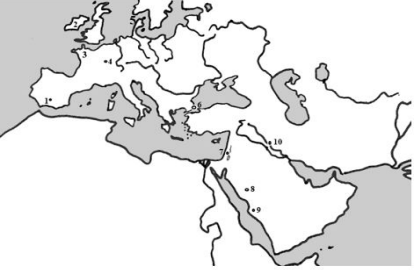 Please be able to locate and explain the significance of the following cities or regions: ∙ Aachen­4

Explain the political and religious factors that led up to the crusades.

­ Palace and leaders at Aachen

­ House of wisdom (ulama would go there to train)

­ Widespread use of paper

Describe how the balance of power shifted between western europe, eastern europe, and the middle east throughout the medieval period.

We also discuss several other topics like What is pacs (political action committees)?

­ became the political and cultural center of the Islamic west

­ umayyad stayed in the Iberian peninsula, capital made at Cordoba

­ The byzantine empire was in Constantinople

­ Constantinople was destroyed during the Nike riots

­ After the riots, it was renovated and defined as Byzantine We also discuss several other topics like What is an old palace abandoned after myecanean age?

­ Peaked as a place of importance in 9th century

­ 6th – 9th century: golden age of innovation We also discuss several other topics like What is the goal is to minimize total fraud costs?

­ People converted to Christianity by St. Patrick (slavery was not Christian) ­ Celtic Monastic Rule: catholic Christians reported to the pope

­ Only place you could have gotten an education

­ Invaded by the Vikings.

­ Battle of hattin paved way by Saladin to retake Jerusalem

­ Known as the holy land

­ Where Hajj is taken place

­ People of medina decide to retake Mecca with 10,000 people

­ Medina was Mohammad’s destination after his hijrah from mecca

­ permanent settlement for the Vikings We also discuss several other topics like What does it take to win an election?

­ Vikings are the Norsemen that left Scandinavia

­ He made Christianity a lawful religion in Roman society

­ He founded the city of Constantinople, the capital of the Eastern Roman Empire. ∙ Charlemagne ­ We also discuss several other topics like What is separation distress?

­ He founded the Holy Roman Empire, stimulated European economic and political life, and fostered the cultural revival known as the Carolingian Renaissance.

­ ​first to set foot in the new world, opening a new land rich with resources for the vikings to explore. Norse/ Viking

­ Son of erik the red

­ His father was Exiled

­ Theodora was the empress of the Byzantine empire.

­ Hagia Sophia built under them.

­ Theodora was a circus performer. Renovation of cities.

­ Justinian made Law codes, and expanded empire. If you want to learn more check out What is bluetooth?

­ Angel in the form of man told him to spread the message that there was only one God, and revealed the Qur’an.

­ Called first crusade to take Nicaea and the Levant.

­ He granted a plenary indulgence to all of those who crusade. Responsible for the first crusade.

­ was sultan of Egypt, Palestine, Syria and Yemen

­ founded the Ayyubid dynasty, and captured Jerusalem from the Christians. ­ Was respected by Christians because he let them go instead of killing them. ­ Was an anti­crusader and ended christian attempt to take egypt

­ Allowed for the transmission of black death

Please be able to define and explain the significance of the following: ∙ Caesaropapism­

­ Lived in a common

­ lived under an abbot

­ started out living in caves (monks)

­ Let to the Destruction of Constantinople. Rebuilt after riots.

­ Before Islam:­ Trade hub, peaceful place where idols were kept; house of rock built by abraham

­ The word of god that contains revelations to his prophet muhammad ­ The holy book of islam, “finest piece of literature in arabic history” ­ Chapters: Surahs, Verses, ayas

­ It is not about Mohammed’s life

­ God is not personified

­ Leader of the muslim community

­ spread the use of paper

­ A split with the [roman catholic] church. ( Latin Christian and Eastern Orthodox.) ­ The cause of it was over papal authority.

­ If fought in crusade, buying for forgiveness

­ Granted to those in the crusade by pope Urban II

­ used to help Alexius I against the turks

For the test, please be able to…

­ After the fall of Rome only a few centers remained in Europe.

2) Explain the political and religious factors that led up to the Crusades ­Before the Gregorian reforms (11th and 12th century) there was a low literacy rate among local clergy & laity and there was little understanding of Christian theology.

­After the reforms there was an increase in education in the clergy, enforcement of laws concerning chastity, simony and pluralism for the clergy, and an overall increased presence of the Church. This marked an increase in Christianity where there was a rise in persecution for non­christians.

3) Describe the effects that the Black Death had on Europe culturally, religiously and politically

­Harvests were ruined. People were starving to death. People leaving farms going into city to find jobs, increased urbanization. Wheat begins to be stored, gets moldy due to humidity. Rats begin to increase. 70­90% fatalities, areas heavily affected by trade. Death to 19 million people in 14th century. The economy suffered for a while because with the half the population lost, there was no one at the time to come in for those jobs. Increased in religious fervor, people try to find who is blamed. Jews get blamed , people are being burned alive & exiled. Accused of not believing in god and poisoning wells. Anti­Semitism.

Long­term results: Increased wages, falling prices for goods all which were caused by the lowering of the population

4​) Describe how the balance of power shifted between Western Europe, Eastern Europe and the Middle East throughout the medieval period

­500 CE: Eastern Europe strongest military, everyone could read, not super educated but literate. They had a strong economy and organized bureaucracy.

­Vikings were master navigators who were in search of arable land and because they went through a population explosion, they decided to set out to find new land.

­Traveled to Faroe Islands, Iceland, and Greenland with Eric the Red

­Also traveled to Newfoundland/Vinland with Bjarni Herjolfsson and Leif Eriksson, were repelled by the Native Americans because they did not want conflict and the climate was colder ­Less diseases, better military, natives were not dying because they (natives) were healthier

­Since they landed in a warmer climate, diseases were able to thrive unlike if they were to land up north like the Vikings did.

­The Spanish were exposed to more they were able to pass more diseases off to animals and people. BECAUSE OF THE SHIPS

What are the two methods of budgeting?

What are the two types of rasters?