When a water bearing rock readily transmits water to wells and springs what is it called?

o hydrologic – lake levels will fall, shrinking back of lakes and rivers (we see changes)

∙ aquifer - A rock unit that can store and transmit water to a well or  spring in useful amounts.

How does permeability affect the flow of groundwater?

∙ Permeability – how easy it is for liquid to pass through it o Permeable – allows passage of water – measure of  Don't forget about the age old question of What is considered drastic weight loss?

∙ Cone of depression – occurs in an aquifer as a result of over pumping,  it is a cone in the water underground that affects structures above  ground

∙ Hydrograph – a graph showing the rate of flow (discharge) versus time  past a specific point in a river (example: 100 cubic feet per minute)  ∙ Types of drainage networks:

What happens to the cone of depression if pumping increases?

We also discuss several other topics like What is the weapon focus effect?

o Dendritic – many contributing streams, which are then joined  together into the tributaries of the main river (veins in body,  branches on a tree)

o Radial - streams radiate or diverge outward, like the spokes of a  wheel, from a high central area (mostly in slopes like volcano or  cones)

∙ Base level – level below which a stream cannot erode its channel

∙ Meander scars – a geological feature formed by the remnants of a  meandering water channel (crescent shape), often formed during  creation of an oxbow lake

∙ Glacier – large mass of ice resting on land or floating in the sea  o Types:

 Cirque glacier – a bowl-shaped depression on the side of or  near mountains. Snow and ice accumulation occurs as the  result of avalanches from higher slopes If you want to learn more check out Who are the only ones who moved out of the old world?

 Piedmont glacier – occur when steep valley glaciers spill  into relatively flat plains, where they spread out into bulb like lobes

∙ Glacial transport – glacier moves and sediment moves within it o Supraglacial – on top If you want to learn more check out What does deterrence mean?

o Lateral moraine – alongside of glacier

o Terminal moraine – at the end of the glacier

∙ Snow line – lowest elevation where snow remains year round ∙ Fjord – a long, narrow, deep inlet of the sea between high cliffs  typically formed by submergence of a glaciated valley (common in  Norway and Iceland)

∙ What is the universal contaminant? Answer: sediment  ∙ How does groundwater contamination move? Answer: down gradient ∙ Which drainage network is ideal? Answer: dendritic

∙ Which is more prone to flooding, rural or urban? Answer: urban ∙ What is the most catastrophic cause of flood? Answer: dam failure Don't forget about the age old question of What is the difference between sympatric and allopatric speciation?
We also discuss several other topics like Who are the largest user of apple gadgets? 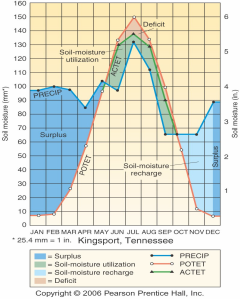 How does social influence affect behavior?

What are the main roles of the endocrine system?