Course: Survey of Earth Science I

Survey of Earth Science I

1. What important proposition was introduced by James Hutton?

2. What principles were introduced by Charles Lyell?

3. What type of age is described below?

“This age is based upon order of formation”

4. Pictured on the left is a ripple mark that is currently forming and on the right is the ripple mark found  in a sedimentary rock.  Don't forget about the age old question of What is the main meaning of equilibrium?

What principle is implied through these samples?

5. **Considering basic principles for determining relative age, what can you learn from the following  picture?

What principles were introduced by charles lyell?

∙ **Professor had not given/shown the picture for this question.

6. What principle does the following picture imply? 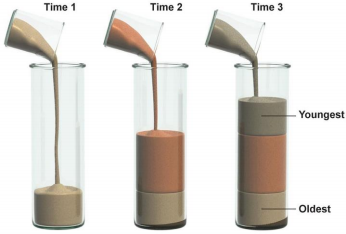 If you want to learn more check out How do we know loftus & palmer (1974) experiment?

7. What principle does the following picture imply?

What is the description for the relative ages of this cross-section?

8. What principle does the following picture imply?

9. What principle does the following picture imply?

10. What principle does the following picture imply? 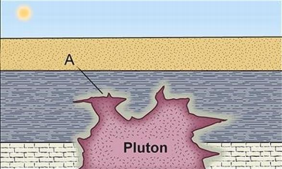 ∙ Baked ContactDon't forget about the age old question of What are the three key processes in and around tubules?

11. What is the description for the relative ages of this cross-section?

A. Paleocene sandstone is older than Basaltic dike.

C. After the formation of limestone layer, the environment changed to a depositional one. D. Limestone layer is older than 80 Ma. If you want to learn more check out How is a cns built? 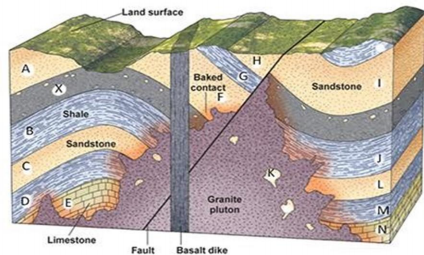 If you want to learn more check out Enumerate the properties of water that are important for life.

12. What principle tells us about the relative ages of Formations B through D? ∙ Superposition Don't forget about the age old question of What is spliceosome?

13. What principle tells us about the relative ages of Formations E and Granite Pluton? ∙ Cross-cutting

14. What principle tells us about the relative ages of Formations K and Granite Pluton? ∙ Intrusion

15. What is the correct description for X?

16. What is the two most important aspects by which fossils can be used to decipher the past history of  the Earth?

A. Time marker, and dating the first time the crust formed.

18. What is the name of the following site pictured, and what type of unconformity can you observe here?  What geologic era did it form in? 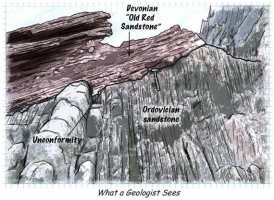 19. What geologic feature would be formed from the process found on the following figure? 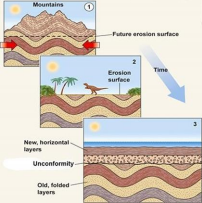 20. What geologic feature would be formed from the process found on the following figure? 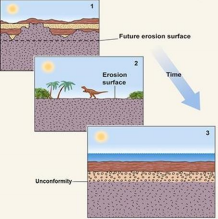 21. What geologic feature would be formed from the process found on the following figure? 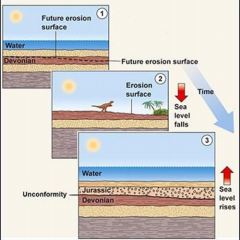 22. The following figure depicts the vertical cross-section of National Parks of Arizona and Utah.

In what location would you expect to find an outcrop that shows the oldest geologic time? (Assume  the principle of superposition)

** Refer to the following. On the left, depicts a depositional environment in which rock columns A, B, &  C formed, which can be found form the figure on the right.

23. What is the process that geologists try to find common in beds A, B, & C, and compare to the formation of rock columns.

25. Who made the first geologic map?

26. What is the largest subdivision of geologic time?

27. What eon stands for “Visible Life”? “Hell”? “Before life”? Referring to the previously listed, what  are their numerical time periods?

28. What era contains the time of “Cambrien Explosion”? 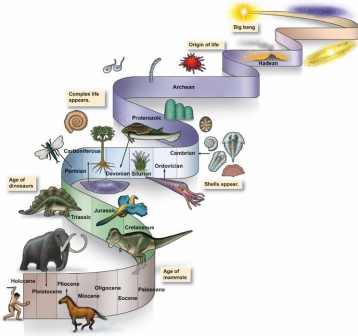 30. In what time period did multicellular life evolve?

31. What is the correct explanation about the geologic time and the evolution of life? A. Cenozoic is the era of dinosaurs.

B. Dragonflies got extinct before Mesozoic Era.

C. Plants landed before the animals did.

D. Life started on the land from the very beginning.

32. What is the area of geology that studies numerical ages of geologic features? ∙ Absolute Age Dating

34. What is the correct explanation about the radioactive decay, and the present and the daughter  isotopes?

A. The daughter isotope is unstable and decay to produce the parent isotope.

B. The amount of the parent isotope decreases as time goes by.

C. The parent isotope is the product of the decay of the daughter isotope.

D. If the decay creates new unstable elements, then the decay stops.

∙ The time in which a parent isotope decays.

36. The following figure depicts the radioactive decay process from Time 1 through Time 5. What is the  formula that calculates the half-life of the parent isotope?

37. Which on the following is the correct explanation for closure temperature for isotopic dating? A. It is the melting temperature of mafic minerals.

B. Isotopic dating gives the time a mineral cooled below that temperature.

C. A metamorphic rock cannot be dated by radioactive isotopes because it never reached that  temperature.

D. Sedimentary rocks are the best rock type to be dated by radioactive isotopes. 38. **Same as Question #3

39. Which one of the following cannot be used for numerical age dating?

A. Growth rings of trees.

B. Annual layers indicating the growth of shells.

D. Succession of fossils of which absolute ages are not determined yet.

40. Where did the Devonian Period get its name?

∙ The first distinguishing rocks were studied in Devon, England.

41. Why did the Carboniferous Period from Paleozoic Era have that name?

What is the key formula you should use in price elasticity of demand?

What is the #1 reason why new products fail?