Description: this study guide covers all new material that will be on the final exam

what is monopolistic competition?

• New firms are free to enter the industry

2. Explain how a firm in a monopolistic competition determines its output and price in the  short run and the long run

what type of market in which a small number of interdependent firms compete behind a barrier to entry?

3. Explain why advertising costs are high and why firms use brand names in monopolistic  competition

• Advertising expenditures increase total cost, but they might lower total average cost  if they increase the quantity sold by enough

• Advertising expenditures might increase total demand, but they might also decrease  total demand facing a firm by increasing competition

what is market with only two firms?

If you want to learn more check out microbiology iupui

• markup = the amount by which price exceeds marginal cost

-example) advertising by coke: coke advertisers spend a lot of money on flashy  advertising to show consumers how good their product is

1. Describe and identify oligopoly and explain how it arises If you want to learn more check out ua star exam

2. Explore the range of possible price and quantity outcomes and describe the dilemma faced  by firms in oligopoly

• Each firm can make a larger profit by increasing production, but this action damages the  economic profit of other firms

3. Use game theory to explain how price and quantity are determined in oligopoly • Game theory is a method of analyzing strategic behavior

• In a prisoner’s dilemma, two prisoners action in their own interests hard their joint  interest

• An oligopoly (duopoly) game is like the prisoner’s dilemma

• The firms might cooperate to produce the monopoly output or overproduce • In a one-play game, both firms overproduce and the price and economic profit are less  than they would be in a monopoly

• In a repeated game, a punishment strategy can produce a monopoly output, price, and  economic profit

• cartel = a group of firms acting together to limit output, raise price, and increase economic  profit

-illegal but they do exist in some markets

• duopoly = a market with only two firms

• payoff matrix = a table that shows the payoffs for each player for every possible  combination of actions by the players Don't forget about the age old question of 1.673x10^-27

• strategies = all the possible actions of each player in a game 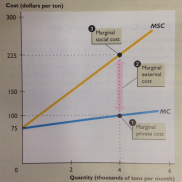 If you want to learn more check out gwu textbooks

• The MC curve shows that the private

marginal cost borne by the factories that produce a

• The MSC curve shows the sum of marginal

2. Inefficiency with an external cost 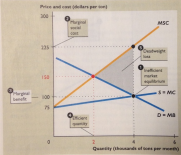 • The demand curve is the marginal benefit 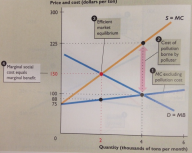 • (1) With property rights, the marginal cost curve  that excludes the cost of pollution shows only part of  the producers’ marginal cost 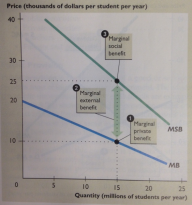 6. Inefficiency with an external benefit 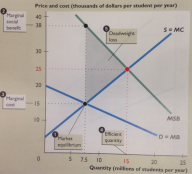 • the market demand curve is the marginal private

• the supply curve is the marginal cost curve, S = MC

private subsidy to achieve an

• the efficient quantity is

• a private good (top left) is one for which

consumption is rival and from which consumers

• a public good (bottom right) is one for

which consumption is nonrival and from which it

is impossible to exclude a consumer

• a common resource (top right) is one that is

• and a natural monopoly (bottom left) is nonrival but excludable

-three main methods that governments use to cope with externalities are: -emission charges

• marginal social cost = the marginal cost incurred by the entire society—by the producer and  by everyone else on whom the cost falls; it is the sum of marginal private cost and marginal  external cost

• property rights = legally established titles to ownership, use, and disposal of factors of  production and goods and services that are enforceable in the courts

• coase theorem = the proposition that if property rights exist, only a small number of parties  are involved and transactions costs are low, then private transactions are efficient and the  outcome is not affected by who is assigned the property right

• marginal social benefit = the marginal benefit enjoyed by society—by the consumers of a  good or service and by everyone else who benefits from it; it is the sum of marginal private  benefit and marginal external benefit

-education services produced by public universities, colleges and schools • subsidy = a payment that the government makes to private producers that depends on the  level of output

• patent or copyright = a government-sanctioned exclusive right, granted to the inventor of a  good, service, or productive process to produce, use, and sell the invention for a given  number of years

• excludable = a good, service, or resource is excludable if it is possible to prevent a person  from enjoying its benefits

• nonexcludable = a good, service, or resource is nonexcludable if it is impossible to prevent a  person from enjoying its benefits

Why do Willusionists think this?

In Presque Vu, how many black tutus is needed?