UA / Environmental Science / ENSC 4023 / What is the river continuum concept?

Description: This is the filled out study guide for Exam 3 with all the correct answers! This is everything that Dr. Austin said would be on the test.

River Continuum Concept: In a river, from headwaters to mouth, the physical variables in a stream  (width, depth, velocity, stream order) create a gradient of physical conditions, creating a continuum of  biological features in the river, such as energy input, organic matter transport, and macroinvertebrate  functional feeding groups.

What is maximum sustainable yield? what are some problems with using msy to manage a fishery?

Don't forget about the age old question of How does the nervous system operate?

∙ Some collectors use nets, others use webs

∙ Collectors produce feces which is also FPOM, and is sometimes bigger than the FROM they  consume

∙ Predators are common throughout almost every food web Don't forget about the age old question of What is an argumentative structure?

Shredders, scrapers, collectors, and predators all produce FROM in the form of feces! Richness: the total number of different species per area

What are the three components of a fishery?

It is ideal for both the species richness and species evenness to be high in an ecosystem.We also discuss several other topics like What is octet rule in chemistry?

Shannon-Weaver Diversity: a quantitative measure of diversity in a community which takes into account  richness and evenness of species. Theoretically, the diversity index can be used to compare diversity  between ecosystems 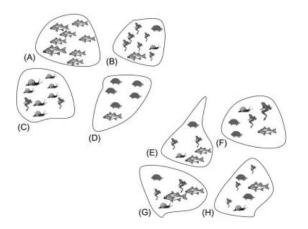 A-D and E-H have the same overall diversity (gamma diversity).

Playa: Round hollows in the ground created by wind scour that are filled with water (relatively small ) 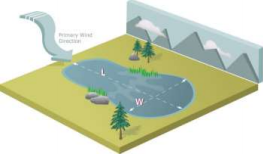 If you want to learn more check out What are 3 major components of the criminal justice system?

Maar: Low relief volcanic crater created by the explosion of groundwater when it comes in contact with  lava

If you want to learn more check out What is meant by production possibility frontier?

Graben: parallel faults which caused the displacement of a block of land downward. This can sometimes  form a lake (examples: Lake Tahoe and Lake George)

Oxbow: Occurs when a river cuts a channel and leaves behind a cut off meander

Reservoir: Mostly man-made impoundments of rivers  Don't forget about the age old question of How quickly an enzyme becomes saturated?

∙ Some are natural

∙ Quake Lake is a natural reservoir (formed by a land slide)

Biodiversity: total variety of organisms found within a defined area

Biological indicator: a species whose population can reveal the condition of the community ∙ Good Indicators: taxa with narrow and specific tolerances

% EPT = % of Ephemeroptero (may flies), Plecoptera (stone flies), and Trichoptera (Caddisflies) which are  present out of the entire community sampled

These taxa are the most likely to be impacted by changes in water quality because these species are  sensitive to decreases in DO, fluctuating pH, and high temperature.

The greater the percentage the better the quality of water; the %EPT is used to compare impacted sites  versus un-impacted sites

Example: Calculate the %EPT for this community

# of individuals within each family

Stock: the abundance of a species of fish

Maximum Sustainable Yield: the largest yield, or catch, which can be taken from a species stock over an  indefinite period. In most fisheries this is around 30% of the population size. However, this approach  ignores the size, age, and reproductive status of the fish which are taken, which has led to the collapse  of many fisheries

∙ Nutrient spiraling (a stream or reservoir concept): the water is moving downstream and taking  nutrients with it

Pathogen: infectious agents that can cause disease

Total Maximum Daily Load: load of a contaminant that can enter a waterbody and the waterbody still  meet WQ standards to protect designated uses

1. What is the River Continuum Concept? Be able to describe concisely the changes that occur in a  river network as you move from headwater (low order streams) to large river (high order streams)  with respect to abiotic conditions, basal food resources and macroinvertebrate communities.

River Continuum Concept: In a river, from headwaters to mouth, the physical variables in a stream  (width, depth, velocity, stream order) create a gradient of physical conditions, creating a continuum  of biological features in the river, such as energy input, organic matter transport, and use by  macroinvertebrate functional feeding groups.

As the river network moves from lower order streams to higher order streams, the stream channel  becomes wider and deeper, and the canopy cover decreases.

In first through third order streams there is high amounts of allochthonous organic matter (organic  matter from outside the stream order), and shredders and collectors dominate while there are few  predators and grazers.

In fourth through sixth stream orders, there is greater amounts of autochthonous organic matter  (organic matter from inside the system – generally algal biomass), and grazers and collectors  dominate while there are few shredders and predators.

In seventh order streams and larger, there is both autochthonous and allochthonous organic matter,  and collectors dominate with few predators.

2. Be able to calculate alpha diversity using the Shannon-Weaver equation for a data set.

Broader and deeper than  the riverine zone

Higher DO over sediments  (cell losses primarily by

Cell losses by grazing and  sedimentation

Organic matter comprised  of both autochthonous and  allochthonous matter

Stratification does not occur in  this zone

Stratification occurs in this  zone

Stratification occurs in this  zone

Allochthonous Organic Matter: from the watershed

Autochthonous Organic Matter: from within the lake or river

4. Briefly describe the different stages in the life and death of a reservoir.

1. Impound a river and the valley fills with water

2. Influx of inorganic sediments, and this begins to fill the lake. Nutrient loading from the  watershed results in an upsurge period

c. Decreased DO due to greater biomass (greater swings between day and night  DO)

d. Culminated in a stable period

a. High biomass and low DO (results in decreased decomposition and benthos  filling up with organic matter)

5. River valley continues to fill with inorganic and organic sediments and the lake  transitions into a bog

6. Eventually the lake will fill completely with sediments.

5. Be able to calculate and determine stream impairment based on Coliforms and E. coli.

STV = Statistical Threshold Value (based on 36/1,000 probability of sickness)

Recommendation 36/1000 will become sick if exposed to GM concentrations

GM = Geometric mean (the nth root of a product of numbers). The geometric mean normalizes the range  of data so that extreme values do not dominate the average

The GM should not be above the standard for a 30-day period.

Example: Calculate the GM and STV values for this stream to determine if it is impaired.

This is less than 10% of all observations, so the stream is NOT impaired for STV

6. Be able to determine lake impairment based on chlorophyll and secchi measurements (In class  assignment).

Secchi disk depth must be greater than or equal to 1.1 meters

8. Which of the following structures can be used to age a fish?

9. What is maximum sustainable yield? What are some problems with using MSY to manage a fishery?

Maximum Sustainable Yield is the largest yield, or catch, which can be taken from a species stock  over an indefinite period. In most fisheries this is around 30% of the population size.  However, this approach ignores the size, age, and reproductive status of the fish which are taken,  which has led to the collapse of many fisheries

10. What are the three components of a fishery?

11. Be able to calculate TMDL from a hypothetical scenario (Homework #6)

Convert the maximum annual P loading rate from the previous question into a Total Maximum Daily  Load. Assuming that there is no waste load (WLA) to Lake Fayetteville, that the Margin of Safety  (MOS) is 20% of the TMDL, and that the background load from the watershed is 120 g/day, how  much load allocation (LA) can be assigned to human non-point P sources?

Steps to Solving the Problem

1. Plug SD into first equation and solve for Chla (answer is in ug/L)

2. Plug Chla into second equation and solve for TP (answer is in mg/m3)

What characteristics of spices made them good trade commodities?

How do you find a one sided limit?