PENN STATE / Biology / BIOL 222 / How do you know if genes are linked or unlinked?

Description: These are more in-depth notes from the second week of class

∙ Analyzes only one characteristic/gene

∙ All characteristics are separate from one another 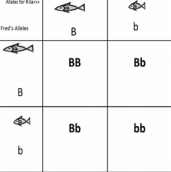 How to fill out the dihybrid cross punnett square?

We also discuss several other topics like Where are hyperthermophiles found?

o Phenotypes 1 and 2 are dominant

o Phenotype 1 is dominant and phenotype 2 is  recessive

o Both phenotypes are recessive

How to make the branch diagram?

∙ Remember these are  pure breed

pollinate and result in F2  F2 (comes from F1 selfing)

These genes are unlinked  because the genes are on  different chromosomes We also discuss several other topics like What is the meaning of single-blind in a placebo?

These are what each number  stands for respectively:

9= round and yellow peas  (homozygous and heterozygous dominant)

3=round and green  We also discuss several other topics like What is the difference between crystal and crystalline?

(homozygous for wrinkled,  homo and hetero for yellow) 1= wrinkled and green

How to fill out the dihybrid cross Punnett Square 1. List gametes from parents on one side

3. Fill in genetic combinations in the squares 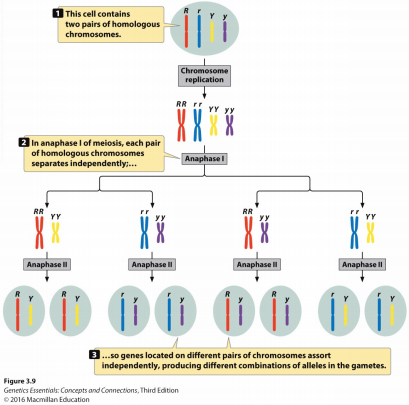 We also discuss several other topics like Is water intracellular or extracellular?

This branch diagram shows that for the first thing written in  both rows is the probability that someone will get brown or  blonde hair color. The next column in both rows shows the

percentage of those that will have brown eye color  (homozygous or heterozygous) and blue hair color  (homozygous recessive). The next column in the first row  shows the probability of people who will show the dominant  phenotype of having both brown eyes and hair and also  those who will have brown hair and blue eyes. The last  column in the second row shows those who will end up  having blonde hair and brown eyes and those who show both recessive phenotypes for having blonde hair and blue eyes.  So if you think about it the first column discusses the  phenotypes for hair color and the second column shows the  phenotypes for eye color. The last column shows the  probabilities of those phenotypes occurring together.

Overall this diagram portrays how the 9:3:3:1 ratio is  established.

How to make the branch diagram

1. List the probabilities for one even happening (getting  the dominant phenotype for one gene and the recessive phenotype for that same gene)

2. List probabilities of second event next to those of the  next

3. Next list the probabilities of those genes alleles  occurring together (blonde hair and blue eyes, brown  hair blue eyes, etc..) and use the product rule to  determine these genetic ratios

refer to branch diagram above 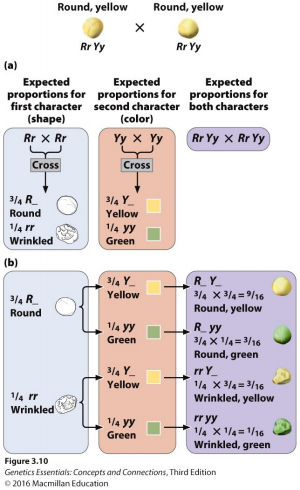 1. Determine the probability of getting each allele for each separate gene

 Each parent has a 50% chance of passing  down an A

 Remember to use multiplication rue

 Each parent has a 50% chance of passing  down a b

 This is different because this is a

heterozygote. Each parent has 2 alleles

they can pass down so it has to be taken

into consideration the probability of each

of the alleles each parent can pass down.

 Both parents have a 50% chance of

passing down both alleles

Now by applying these examples and knowledge you  can find probabilities for trihybrid, tetrahybrid crosses  and so on

Finding the probability of getting AAbbCcDdee Respectively

o ¾ because its dominant

Probability of getting these phenotypes is 27/1024

Only ones you need to know are

 A person who is heterozygous for the disorder is a  carrier 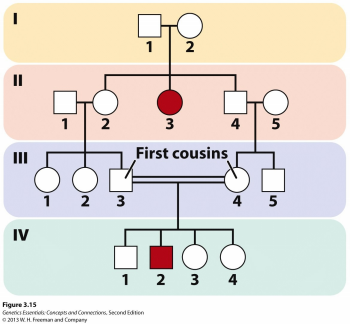 transmitting the condition to sons and daughter in  equal proportions

 No sex chromosomes. Specific genes on the autosomes  determine the sex

 Genes on various autosomes in the genome. Genes  spread out in a variety

 X: a ratio dictates the sex THIS IS TRIVIA

 The presence of the Y chromosome dictates maleness o SRY gene is on the y chromosome, this gene is  what establishes maleness. If SRY is deleted the  person can be female

 Many more males than females have it

o Males need the mutation on only one X

chromosome because there genotype is XY

 Ex gene for colorblindness is on the X

Remember X is what determines eye color not Y

 All females are red: X+Xw because X+ is dominant over Xw

homozygous dominant so the males can only get  an X+

 Phenotype frequency for these flies is 3:1

Red Female: White Female: Red Male: White Male  (X+Xw) (XwXw) (X+Y) (XwY)  Because female give 50% of one of the alleles and the  male gives the recessive type but the females still give

50%. Think in a way that the female overall determines  what happens here.

 Many more males than females show the recessive  phenotype

 If the functional X has a recessive allele the recessive  phenotype is expressed. Since the inactivation process  is random all female mammals are genotypes  corresponding to inactivation alternatives.

∙ Phenotype of heterozygote includes phenotypes from  both homozygotes

∙ When two alleles are both shown

∙ Ex: A fish being colored blue and red

∙ Phenotype of the heterozygote is intermediate between the two homozygotes

o this is for normal blood cells

o So no anemia but can get sickle shaped cells

∙ Ex: B is an allele for brown hair. BB genotype is  expected to have the phenotype of brown hair. So, this  is the percent of individuals from a selected group,  population, etc who actually show brown hair with this  genotype

∙ A genotype that does not always produce the expected  phenotype

∙ Ex: Human polydactyly: it is a dominant allele but not  everyone with the allele has extra digits

∙ Degree to which a phenotype is expressed

∙ Alleles of a gene that cause death

∙ Death may occur during early embryonic development,  after birth, or later in life

∙ Yellow coat is a variant

∙ Has no tail when it is heterozygous

∙ When it is homozygous it is lethal

These two examples of lethality (Mouse and cat)  are pleiotropic

o Pleotropic: Allele that affects more than one  characteristic

∙ A gene that has more than two alleles

o A and B are codominant 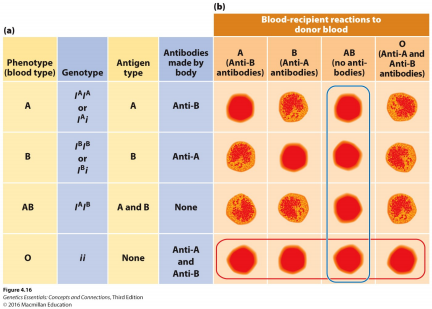 ∙ Heterozygous for both gene

∙ Having one dominant allele

for both gene pairs makes a

∙ Having recessive yy and one dominant C makes the  color orange

∙ Having homozygous recessive for both gene pairs  makes the color cream

∙ Dominant EE or Ee has no impact on color

only look at Bb alleles to see the color

recessive ee to dominate the colors

∙ Only need one dominant allele for epistasis

W: the dominant allele for epistasis prevents conversion of  compound A to compound B to make the squash a WHITE  COLOR

W is epistatic to Y and y

Why does time go by so fast when you get older?

What was the tragedy of deirdre?