Description: This study guide covers the all the material on exam one.

How do you know which resonance structure is best?

Don't forget about the age old question of What is a plant cell without a cell wall?

- Electronegativity is an atoms willingness to adopt an electron.  o It increases up and to the right

o Fluorine is the most electronegative atom

o Include functional groups If you want to learn more check out What are the main characteristics of primates?

o REMEMBER EACH CARBON GETS 4 BONDS

Why do carboxylic acids smell bad?

∙ From an atom (lone pair) to an adjacent bond

 Resonance structures in which an atom carries more than its  quota of electrons (8 for C, N, O, F) are NOT contributors to the  real structure.If you want to learn more check out How is mathematics shown in nature?

 The more important RS (Resonance Structure) (major vs. minor)  show each atom with a complete octet and as little charge

o Be able to identify and name functional groups 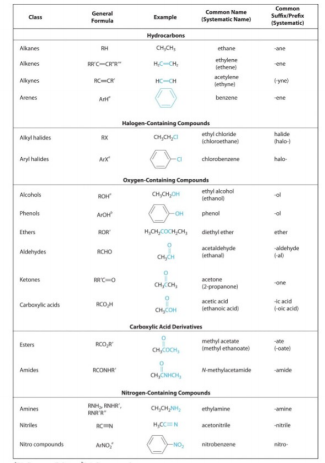 We also discuss several other topics like What is the function of the simple columnar epithelium?

 Classified as strong or weak based on their affinity for H+

 A strong acid can drive it to completion

 Can be driven to completion by a strong base

 the lower the pKa the more acidic

∙ pKa values around -2 Don't forget about the age old question of What were some of the characteristics of paleolithic society?

o REMEMBER: when drawing arrows to show how the products of a  reaction are formed, they always go from ELECTRONS TO THE H and  then from the BOND TO THE ATOM

 Size: the larger atom disperses the negative charge over a  larger region

 If the conjugate base of an acid is able to move the negative  charge to other atoms it is more stable, making the acid more  acidic

 The less p’s in the hybridization the more acidic

o If the pH of a solution is less than pKa, the proton is ON

o If the pH of a solution is greater than the pKa, the proton is OFF o Electrophoresis: separation of amino acids

- Compounds with the same molecular formula and different connectivity - Longer chains have more contact with each other, which gives them a higher  boiling point

o Count the number of carbons on the longest chain

- The longer the chain (more contact area) the higher the boiling point  o The more compact a molecule is the harder it is for the molecules to  connect, making it easier to break them apart, resulting in a lower  boiling point

∙ Arrows must be drawn with 1 barb

∙ Free radicals can do 3 things:

o Add to a double bond

How does the criminal justice system respond to crime?

What is the meaning of intensive?