In biology, what is a polypeptide chain?

In biology, what is a polypeptide chain?

Description: This study guide was built for each of his chapter guides and I filled in all the needed information! Happy studying!

In biology, what is the polypeptide chain? 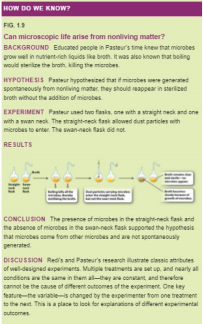 If you want to learn more check out What are the impacts of rising sea levels?
Don't forget about the age old question of What are the characteristics of culture?

a) All matter is composed of atoms

b) Atoms have volume and mass

I) Composed of protons, neutrons, and electrons

III)Mass of one electron= usually ignoredIf you want to learn more check out In chemistry, what are the isomers?

I) The number of protons identifies an element

Who is oswald avery?

I) Forms of an element with different numbers of neutrons,  thus different mass numbers  We also discuss several other topics like What are the scales of measurement?

II) Radioisotopes are unstable, they give off energy from the  nucleus

(1) This radioactive decay transforms the atom (2) Energy can interact with surrounding material d) H, C, N, O,P makes up 90% of our mass and all if creations  mass.

Atomic number: I) The number of protons identifies an element

The types of chemical bonds:

a) Chemical Bond: attractive force that links atoms together to  form molecules

b) Covalent Bond: atoms share one or more pairs of electrons,  so that their octet is filled

a) Describes location of electrons Don't forget about the age old question of Who determined that dna was the carrier of genetic info?

b) Regions where electron is found 90% of the time c) Have characteristic shapes and orientations, and can be  occupied by two electrons

II) Anions: negative If you want to learn more check out Jacopo peri wrote what?

The structures of proteins, nucleic acids, carbohydrates and lipids. A) Protein

a) Functions of the approximately 23,000 human proteins I) Enzymes

b) Made from different amino acids

c) Polypeptide chain: single, unbranched chain of amino acids I) A chain is folded into a specific 3D shape to form a  functional protein

II) Serve a structural function in DNA and chitin

(1) Hundreds or thousands of monosaccharides (2) Starch, glycogen, cellulose, are made with glucose monomers

I) Fats and oils for energy storage

a) The amount of substance (in grams), the mass of which is  numericall equal to its molecular weight (mol=g/MW) b) One mole contains 6.02x10^23 atoms

a) A solution is a substance (solute) dissolved in a liquid  (solvent).

b) A 1 molar solution (1M) is 1 mole of a substance dissolved in  water to make 1 liter of solution.

c) Required for the storage and transmission of genetic  information

I) Nucleotides consist of a pentose sugar, a phosphate  group, and a nitrogen containing base

a) Molecular structures can be found through x-ray  crystallography

I) Crystals of a purified substance are generated

c) 1950: Erwin Chargaff found in the DNA from many different  species

d) The backbone of DNA and RNA consists of the sugars and  phosphate groups, bonded by phosphodiester linkages

e) The two strands of DNA in the helix

I) Run in opposite directions

I) A and T are hydrogen bonded

a) Usually one strand

b) The sugar is ribose

c) Contains uracil (U) instead of thymine (T)

d) RNA can pair with a single strand of DNA, except that  adenine pairs with uracil

e) Messenger RNA, mRNA forms a complimentary copy of DNA  and carries information to the cytoplasm

I) Made in the process of transcription

a) 1920s: chromosomes consist of DNA and proteins b) Is DNA genetic material?

I) It’s in the right place

II) It is present in the right amount

I) Worked with two strains of a bacteria

II) Determines that a chemical transforming principle, from  dead cells of one strain produced a heritable change in  the other strain.

I) RNA polymerase binds to the promoter

I) RNA polymerase binds to the promoter

a) Polymerization of RNA occurs in a 5’ to 3’ direction

b) Expression of a gene to form a polypeptide (two steps): I) Transcription: making a single stranded RNA copy of a  gene

c) Central dogma: information flows in one direction when  genes are expressed

(1) Viruses: non-cellular particles that reproduce  inside cells, many have RNA as their genetic material

The domain structure of pre-mRNAs and mRNAs

(1) Introns are removed from the final mRNA

b) Messenger RNA, mRNA forms a complimentary copy of DNA  and carries information to the cytoplasm

I) Made in the process of transcription

c) In the nucleus, pre-mRNA is modified at both ends I) G cap is added at the 5’ end (modified GTP)

The details of the Hershey-Chase experiments 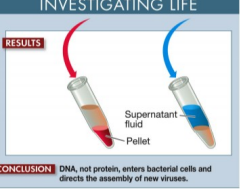 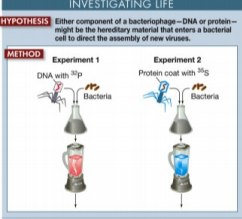 (1) Important for the stability and transcription of the  mRNA

The four levels of protein structure

I) The sequence determines the secondary and tertiary  structure

(1) How the protein is folded

III)Tertiary structure is determined by interactions of R groups

The types of chemical bonds that hold proteins together

I) Charged tRNA binds to the mRNA

I) Where the tRNA sits before being released

I) They carry amino acids for the process of translation II) For each amino acid, there is a specific tRNA

a) How was it deciphered

c) For most amino acids there are more than one codon

What is the importance of homologies?