millikan's "oil drop" apparatus allowed for the determination of which

millikan's "oil drop" apparatus allowed for the determination of which

Description: 13 pages of information This study guide covers Chapters 1 through 3, which will be tested on the first exam combines information from in class lectures, the textbook, and internet research

● What is a molecule?

Atoms bound together in a specific geometrical arrangement. They are  extremely small and their properties are determined by the arrangement of the  atoms.

This is determined by the relative position of particles and how strongly they  interact with one another. States include: solid, liquid, and gas. Solid matter has  strong attraction and are packed closely together; which is why solids have a fixed  volume and shape. Liquid matter is packed closely together too, but has a weaker  attraction than that of solid matter; liquids have a fixed volume but not shape.  Gaseous matter has very weak attraction and do not clump together; thus gaseous  matter does not have a fixed volume or shape.

A scientific law is a statement based on repeated experimental observations  that describes how nature behaves. A law always applies under the same  conditions, and implies that there is a causal relationship involving its elements. A  scientific theory is a well-supported explanation of some aspect of the natural world, based on a body of facts that have been repeatedly confirmed through observation  and experiment (a theory is not a guess by any means). Observations involve  gathering information through the senses and are often done so quantitatively with  measurements (numbers).  We also discuss several other topics like gabrielle floyd
Don't forget about the age old question of film 2700 gsu exam 1

● Law of conservation of mass

The law of conservation of mass states that mass in an isolated system is  neither created nor destroyed during chemical or physical reactions Therefore, the  mass of the products in a chemical reaction must equal the mass of the reactants

Law of conservation of mass

The law of definite proportions states that a chemical compound always  contains exactly the same proportion of elements by mass. If you want to learn more check out thermodynamics exam 1

The law of multiple proportions states that elements combine in whole  number ratios.

- each element is composed of tiny, indestructible atoms

- all atoms of the same element have identical mass and properties to each  other, but different from the atoms of other elements

- atoms of one element cannot change into atoms of another element. In  chemical reactions, they only change the way they are bound to other atoms

Thompson applied a high electrical voltage between two electrodes at either  end of a partially evacuated glass tube (a cathode ray tube). He found that the  beam of particles (cathode rays) traveled from the negatively charged electrode (cathode) to the positively charged electrode (anode). He also found that they are  negatively charged. Electrical charge is what results in attractive and repulsive  forces -called electrostatic forces- between the charged particles.  We also discuss several other topics like Chapter 1: Thinking Critically with Psychological Science WHAT IS PSYCHOLOGY?

He also found the charge to mass ratio of the particles by deflecting them  using electric and magnetic fields and finding at which measurement they canceled, leaving the beam undeflected. The value is -1.76 x 108 coulombs per gram (this is  2000 times lighter than Hydrogen, the lightest known atom). He discovered the  electron.

Milikan sprayed oil into an apparatus. In the top half of the apparatus, he hit  the air with ionizing radiation which allowed the drops to gain electrons. In the  bottom half of the apparatus, he applied an electric voltage. The electric field  produced by this voltage would act on the charged oil drops and the  electromagnetic force would just balance the force of gravity on a drop, and the  drop would hang suspended in mid-air. Using the strength of the electric field and  the mass of the drops themselves, he calculated the charge of each drop.

The charge of an electron determines how strongly it holds its bonds. ● Rutherford’s gold foil experiment

Rutherford shot a beam of alpha particles at a sheet of gold foil, a few of  the particles were deflected (this was unexpected). He concluded that a tiny, dense  nucleus was causing the deflections. If you want to learn more check out are high speed central networks to which multiple smaller networks connect

He found that an atom was much more than just empty space and  scattered electrons and that it must have a positively charged center that contains  most of its mass (the nucleus).

● Sub atomic particles and their properties

Isotopes are atoms with the same number of protons but different number of  neutrons.

Ex. Carbon-13 has 6 protons but 7 neutrons. We also discuss several other topics like adrian michael pitt

Step 1: Determine how many grams are given in the problem.

Step 2: Calculate the molar mass of the substance.

○ find an atomic mass from an isotopic mass, or vice versa

Step 1: Calculate the percent abundance for each isotope: 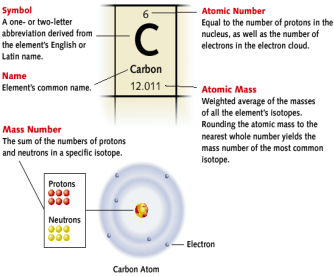 Zeros appearing in front of nonzero  digits are not significant

Zeros at the end of a number but to the left of a decimal may or may not be  significant. If such a zero has been  measured, or is the first estimated digit, it is significant. On the other hand, if  the zero has not been measured or  estimated but is just a placeholder, it is  not significant. A decimal placed after  the zeros indicates that they are

2000 m may contain from one to four  sig figs, depending on how many zeros  are placeholders. For measurements  given in this text, assume that 2000 has one sig fig.

2000. m contains four sig figs, indicated by the presence of the decimal point

Scientific notation - All digits expressed  before the exponential term are  significant.

Accuracy is how close the measured value is to the actual value. For  example, if in a lab you obtain a weight of 3.2 kg for a substance, but the actual  weight is 10 kg, then your measurement is not accurate because it is not close to  the correct value.

Precision is how close the measurements are to each other. For example, if  you weigh a substance five times, and get 3.2 kg each time, then your  measurement is very precise.

Density of a substance is the ratio of its mass (m) to its volume (V). Its units  are g/cm3

Unit we are converting

Ex. Calculate the displacement (the total volume of cylinders through which  the piston moves) of a 5.70 L automobile engine in in3

● Orders of magnitude and scientific notation

The mole gives us the relationship between mass and number of atoms.  1 mol atoms

Ex. Calculate the number of copper atoms in 2.45 mol of copper

Convert between mass and moles using the elements molar  mass 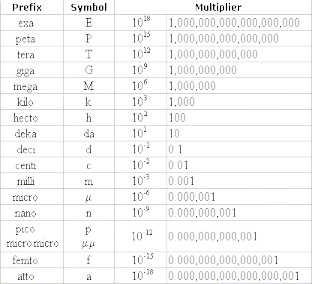 Amplitude – the vertical length of a crest or trough; determines  intensity/brightness

The frequency of a wave is directly proportional to its speed

The frequency of a wave is inversely proportional to its

If two waves of equal

amplitude are in phase (align  with overlapping crests)

interact, it results in wave with twice the amplitude.

If two waves of equal

interact, their waves cancel  out 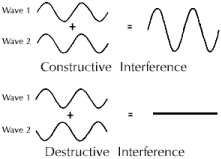 Diffraction – when a wave bends around an obstacle 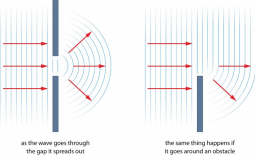 Light and matter act as both waves and particles.

The wave nature is seen most clearly through diffraction.

The wave and particle nature of electrons are said to be complementary. This means they exclude one another – the more we know about one, the less we  know about the other (which one we observe depends on the experiment we  perform)

The photoelectron effect is the observation that metals emit electrons when  light shines on them as long as the energy of the photon is greater than the energy  with which the is bound to the metal.

Albert Einstein proposed that light energy came in packets (photons) and the  amount of energy depended on the frequency. This meant light was not a  continuous wave, but a series of photons with a certain amount of energy.

But since v=cλ , it can also be expressed as

Ex. A nitrogen gas laser pulse with a pulse wavelength of 337 nm contains  3.83 mJ of energy. How many photons does it contain?

Energy of the laser energy of a photon =

When an atom absorbs energy, it reemits the

energy as light at various wavelengths.

By passing the light emitted by a single atom

through a prism, we can separate the light into its different

wavelengths. This results in an emission spectrum- a

series of bright lines that is unique to each element.

Bohr’s model depicted electrons traveling around in orbits  around the nucleus at specific, fixed distances. The energy at each orbit is also fixed unless the electron jumps from one orbit to  another.

His model explained that electrons could jump from

one orbit to another only by emitting or absorbing energy in  fixed amounts. If an electron jumps one orbit closer to the

His model was later replaced by one that completely incorporates the wave  nature of electrons.

Ex. Calculate the wavelength of an electron traveling with speed of 2.65 x 106 m/s

Probability distribution maps show where an electron is likely to be found  under certain conditions. The path an electron will take is indeterminate (we don’t  know where it will land) but after observing where numerous electrons land in  certain conditions, a statistical pattern can be made. However, orbitals are used to  describe the electrons position, not location. Therefore, orbitals are a probability  density distribution map of the electron, or the path the electron will likely take.

E = the actual energy of the electron

Ψ = the wave function that describes the wave nature of the

● The wave functions of hydrogen

1) The Principal Quantum Number (n) – an integer (1, 2, 3, …) that  determines the overall size and energy of an orbital. Orbitals with higher n values have more energy and the space between energy levels decreases. The energy is negative because it is lowered according to its interaction  with the nucleus.

Ex. Determine the energy of hydrogen electron in the second orbital 1 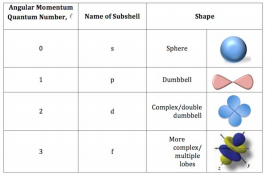 3) The Magnetic Quantum Number (m1) – an integer that specifies the

4) The Spin Quantum Number (ms) – specifies the orientation of the spin of  the electron. The electrons spin is a fundamental property of the electron  and all electrons have the same amount of spin, but they can spin

Same value of n and l = same  sublevel (or subshell)

Number of orbitals in a sublevel = 2l +1

Number of orbitals in a level =  n2

○ orbitals and their shapes

A three-dimensional plot of Ψ2

The three p orbitals differ only in their orientation

They are orthogonal (mutually perpendicular) to one another

Higher p orbitals (beyond 3), are similar in shape to 2p orbitals but  contain more nodes and are larger in size 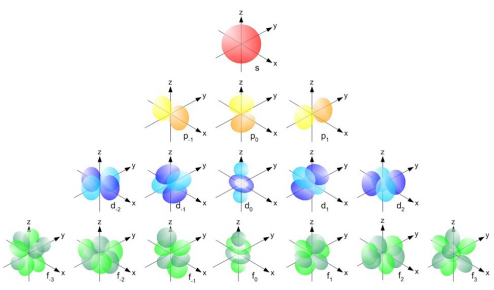 f orbitals have more lobes and nodes than orbitals

A change of an electron from one quantum state to another within an  atom. Allowed when the change in l (angular momentum quantum number) equals  +1 or -1. If that is not the case, the transitions are “forbidden” (occur with much  smaller probability).

○ relationship between # of nodes and n quantum number

A node is a point where the electron probability is zero. The number of  nodes equals the n quantum number minus 1. 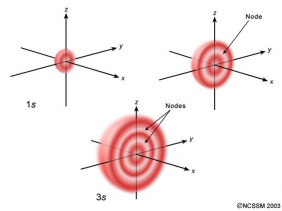 The different values of n give the average distance of the electron from the nucleus (average radius).