Width and depth of an ocean basin:

o Provides information about elevation of the ocean

what are the types of convergant boundaries?

o Basalt (created from volcanic material, as a result of Earth’s  interior) Don't forget about the age old question of the part of the brain that maintains balance and motor coordination grows fastest

o Density = 3gm/cm^3, AKA: thinner/deeper than continental  crust – (this is the biggest difference between oceanic crust  and continental crust)

• ^^ The Relationship between Continental Crust and Oceanic Crust  provides for the “WHY” behind the existence of Oceanic Basins o Ex: “The summit of Mt. Everest is marine limestone”

???? AKA: the material at the absolute bottom of the ocean,  can be found at the highest point on Earth, as a result

which sediments has a macrosopic meteor debris?

If you want to learn more check out ∙ People act differently in the presence of others, but why?

o AKA: North and South Polarities

• Magnetic Pole: create magnetic field lines that run from the north  pole to the south pole (and vise versa) – as opposed to Axis of  Rotation, the Magnetic Pole frequently changes:

orientation of Earth’s rocks to flip/reverse as well

???? These anomalies allow for one to detect the timing in

regards to the existence of various rocks

Earth’s interior – heat – makes material fluid like and able to move around • Results in a Convection Cycle in the Asthenosphere: o The heat (as a result molecular motion as molecules are  bouncing off of each other) – results in expansion, and causes  the heat to rise (upward movement) If you want to learn more check out scad estar

o Lifted magma then generates convection cells – as it rises  and pushes against the solid, basaltic rock on surface, it

???? Subduction: when fluid material is forced under solid

rock (at the edge of ocean) – causes friction:

???? Sea Floor Spreading: when ocean splits (middle of the  ocean)

o Results in those sporadic

flips/reverses of orientation of rocks

• Symmetry of Sea Floor Stripes: as a

result of the constant/consistent convection

cycles, as hard rock is split and magma

constantly rises to “fill that gap”

at the bottom of the sea floor

• AKA: no photosynthesis, (initial belief: no  way to create food/life) Don't forget about the age old question of what is the simplest unit of an element that maintains all the characteristics of the element?

• Doesn’t boil because of pressure

waters, results in plumes “letting out,” into

of fast temperature change and are

???? Surrounding bacteria takes in those minerals

• crabs/shrimp (without eyes b/c not

necessary with lack of light anyways)

o “plates move towards each other”

o Plates “slide past each other,” one moves north, one moves  south 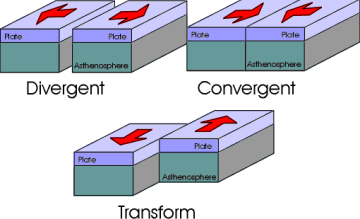 o Hotspots – as a result of mantle plume

✂ Volcanic islands within a plate

o As islands sink (contraction) they

seem to be getting smaller – and if

they sink enough, it seems as if

islands no longer exist because

• Physically attached to the shoreline

???? Can accommodate for change of geology

“Why are sediments important?”

o As a result of naturally variability?

o Osculation of the climate?

The ability to detect signals in sediments on the sea floor using  phytoplankton and oxygen isotopes:

o Allows one to learn about timing/history

• Sediment accumulation – representation of what happens at the  surface

✂ -- these shells sink down the water column and

accumulate and provide for the sedimentary

???? ex. phytoplankton – small (microscopic) organisms that  use photosynthesis to survive

???? ex. plankton – anything that can’t swim faster than the  current – relative in size – largest accumulation of

anything in the world – most of the biomass on earth is

• = small enough that they remain at the

because it is lighter

record, aka: the possibility to recreate

climate from over 180million years

transported somehow to the ocean to the seafloor

accumulate and high pressure compresses that sediment into  rock

• Hydrogenous or “authigenic” – derived from water

• Reflect composition of rock from which derived

o Carried to ocean through:

o Grain size – proportional to energy of transportation and  deposition

???? Shells sink down to the seafloor when they die – where  they accumulate and generate siliceous ooze

???? The siliceous ooze then solidifies and becomes

accumulate in great depths (aka: if its found in very

deep water along the floor, its siliceous)

???? As warm surface water is pushed away, siliceous ooze

fills in that space

✂ Can be found at some coastlines, but most

importantly at the equator and high latitudes

• Coccolithophores – produces a lot of ooze

o Depth where CaCO3 readily dissolves into a solution, AKA:  cannot accumulate!

o Rate of supply = rate at which the shells dissolve

???? Fist-sized lumps of manganese, iron, and other metals

???? Many commercial uses – but mining operations are hard  at great depths

???? Unsure why they are buried by seafloor sediments and

remain at surface of the seafloor

o ^ “Then why are they important?”

???? When looking at extinction rates – cosmogenous

sediments are able to provide a timeline of extinction

and potential reasoning as to the “why” behind the

iridium (which is very rare on Earth)

• Knew iridium was present in asteroids

• Proposed the theory that a massive

Earth, causing extinction of the dinosaurs

amount of mass into atmosphere– created

o Between positive and negative ends of water

o With molecules to each other or other ions

???? Hydrogen bonds are weaker than covalent bonds but

still strong enough to result in

o Created by the energy of moving molecules

o AKA: Because water has such a high heat capacity, it can  take in or lose a lot of heat without changing temperature

???? Calorie – amount of heat needed to raise temperature  of 1 gram of water by 1 C

???? Temperature – a measurement of average kinetic

✂ Thermocline = abrupt change of temperature with

to raise temperature of 1 gram of any

• Does not affect surface waters

o The ocean is layered according to density

• Influx of freshwater lowers salinity or

o Low salinity (except where ice is