MSU / Chemistry / CHEM 141 / What is the difference between atoms and molecules?

Description: This a study guide for the first exam of the semester and covers chapters 1 through 3 in depth, with details that are expected to be on the exam.

- The difference between atoms and molecules.

o An atom is the smallest constituent of ordinary matter that has the properties of a  chemical element.  We also discuss several other topics like econ1020

- The three main states of matter are solid, liquid, and gas

o Solid: particles in a solid are tightly packed, usually in a regular pattern. These  particles vibrate but do not generally move from place to place

o Liquid: particles in a liquid are close together but have no regular arrangement.  They move about and slide past each other.

What are the three main states of matter?

o Gas: particles in a gas are well separated with no regular arrangement. These  particles vibrate and move freely at high speeds.

- The difference between mixtures and pure substances; elements and compounds; and  heterogeneous and homogenous mixtures

▪ Pure substances only have one kind of atom or molecule. An example  would be salt (NaCl)

▪ Mixtures have a number of different pure substances mixed together. An  example of this would be salt that has been dissolved in water (NaCl and  H2O)  We also discuss several other topics like aspeina

▪ An element is a pure chemical substance made of the same type of atom.  An example would be things like iron (Fe), copper (Cu), silver (Ag), gold (Au), and nickel (Ni)

What is the law of conservation energy?

▪ A compound contains atoms of different elements that have been

chemically combined together in a fixed ratio. An example would be water (H2O), salt (NaCl), and sodium bicarbonate (NaHCO3) If you want to learn more check out uh mece

▪ Homogeneous mixtures are a mixture that are uniformly distributed throughout the mixture. The composition of the mixture is the same

throughout, an example would be air, sugar water, vinegar, and

▪ Heterogeneous mixtures is a mixture where the components of the mixture  are not uniform or have localized regions with different properties.

Examples of this would be milk and cereal, pizza, soil, and mixed nuts - The law of conservation energy

o This law states that energy cannot be created or destroyed, but only changed from  one form to another or transferred from one object to anotherIf you want to learn more check out purdue biol 221

o This law states that for any system closed to all transfers of matter and energy, the  mass of the system must remain constant over time, as system mass cannot  change quantity if it is not added or removed. Don't forget about the age old question of mpf is a general regulator of the transition from

▪ Only applies to chemical and physical reactions, the total mass in a  reaction must be conserved

▪ Mass of reactants = Mass of product

o Amount of a substance = Mole

- The law of definite proportions

o This law states that in a pure compound the elements combine in definite  proportions to one another by mass. In other words, we know that water is always  composed of two hydrogens and one oxygen.

- The law of multiple proportions

o If elements A and B react to form two different compounds, the different masses  of B that combine with a fixed mass of A can be expressed as a ratio of small  whole numbers.

o All atoms of a given element have the same mass and same properties (same  properties is 99.99% true, however mass is not true due to isotopes)

o Atoms of one element cannot change into another element

o Once the electron was discovered, models began to be proposed to fit the new  data

o Robert Milliken determined the charge on an electron

o Nucleus - A group of atoms bound in a structure, such as a benzene ring, that is  resistant to alteration in chemical reactions.

o Neutron - a subatomic particle, symbol n or n0, with no net electric charge and a  mass slightly larger than that of a proton.

o Atomic mass unit - Masses are often expressed in atomic mass units (amu) o Atomic number – The number of protons in the nucleus, this is how the periodic  table is organized

o Chemical Symbol – This is the abbreviation for the elements on the periodic table o Isotopes – atoms of an element have a different number of neutrons o Mass number – can be found by taking the number of protons, and adding the  number of neutrons

- How ions are formed

o an atom that has obtained a charge

o Accuracy – How close measurements are to an actual value

o Moles - unit of measurement in the International System of Units (SI) for amount  of substance. It is defined as the amount of a chemical substance

- Converting between moles and atoms

- Converting between moles and mass

o Objects on the length scale on which objects or phenomena are large enough to be  visible practically with the naked eye, without magnifying devices

o Wavelength – the physical distance between crests of the light wave

- Converting between wavelength and frequency

▪ Constructive interference, when the waves add to each other and the  amplitude grows

▪ Destructive interference, when the waves cancel out from being out of  phase.

o Diffraction - The lending of a wave around on obstacle, circular in nature - Converting energy, wavelength, and frequency of electromagnetic radiation o De Broglie Wavelength

▪ This is the equation:

o Wave function - a probability amplitude in quantum mechanics describing the  quantum state of a particle or system of particles.

- Identifying the shapes of orbitals 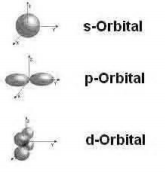