Description: These notes were taken from the book and lecture slides. Hope this helps during the first exam!

Resolution: the ability to distinguish two adjacent objects as distinct and separate  Resolution is determined by the wavelength of light (shorter is better) and the  numerical aperture (higher is better).

What is the purpose of staining?

Many dyes used in microbiology are positively charged and are called basic dyes.  ∙ Ex) Methylene blue, Crystal violet, Safranin We also discuss several other topics like What are the bone stem cells?

Gram staining: Bacteria can be divided into:

∙ Gram positive- These appear purple-violet after being stained with crystal  violet. These do not get decolorized with ethanol.

∙ Gram negative- These are counterstained after being decolorized with  ethanol with Safranin. They appear pink.  If you want to learn more check out What happened in nat turner’s rebellion?

What is the structure of a dna model?

If you want to learn more check out What is the meaning of the individual level?

Morphology is not used to predict or show physiology, phylogeny or pathogenic  potential.

Why are some organisms shaped the way they are?

The cytoplasmic membrane surrounds the cytoplasm and separates it from the  environment and has selective permeability.

∙ Composition If you want to learn more check out What is the scientific study of interactions between organics and their environment?

∙ The membrane has many proteins. Hydrophobic parts of the protein spans  the membrane while the other sides interact with the environment and the  cytoplasm.

The outer surface of the membrane interacts with the 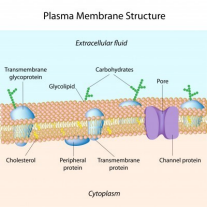 interacts with the cytoplasm.

o Peripheral- does not go through the membrane, but

is associated with the surface of it

∙ Composition  If you want to learn more check out What is strategic business manager?

o Hydrophobic side chains are not fatty acids, they are isoprenes

Monolayers are extremely resistant to heat and are found most in extremist  Archaea.

Some archael lipids contain rings within the hydrocarbon side chain.  ∙ Example) Crenarchaeol is a lipid that has 5 rings. 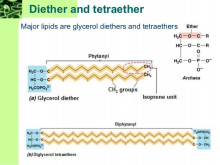 The membrane has 3 major functions:

3. Energy conservation – it can exist in an energetically charged form,  separating ions for the purpose of energy

The hydrophobic portion of the membrane is a tight barrier to diffusion of things  located inside of the cytoplasm; especially molecules that are polar and charged.  These molecules must be transported.

∙ Can H+ diffuse across the membrane? NO! It is charged

∙ Can water diffuse across the membrane? YES! Water is essential to the cell  and is somewhat polar but is small enough to diffuse. Other examples are O2 and CO2

Because of the selective permeability, transport proteins are essential. Transport  reactions move nutrients from low concentration to high concentration. This takes  energy to do.

∙ Transport reactions are much faster than simple diffusion but they do have a  saturation effect. This means that no matter if there is a lot of substrate  outside of the cell, if all of the proteins are being used up (already  transporting substrate inside of the cell) then the rate cannot go any faster.

Passive – this type does not require energy. There is transport along the  concentration gradient. (From high to low)

Bacteria can be divided into gram-positive and gram-negative. The cell walls of  bacteria have a rigid layer added for strength called peptidoglycan. It is composed  of:

4. And cross linkages that make it stronger. These differ in gram positive and  gram negative bacteria

Gram-positive cell walls are composed of 90% peptidoglycan. There are usually  several sheets of it stacked upon each other. Their cell walls also contain techoic  acids that are embedded within the wall. Lipotechoic acids are ones that covalently  bound to the membrane lipids.

Gram negative cell walls only contain a small amount (10%) of peptidoglycan. Most  of their cell wall is composed of the outer membrane or Lipopolysaccharide layer  (LPS). LPS is composed:

The Lipid A is known to be very toxic to animals (endotoxin). Examples of this is  salmonella and certain pathogenic strains of E. coli.

Gram negative cell walls also have a space between the outer membrane and the  cell membrane called the periplasmic space. In this space is where you would find  proteins that are embedded within the cell membrane.

Archaeal cell walls do NOT contain peptidoglycan. It also does not have an outer  membrane.

Instead, some of the cell wall consists of a polysaccharide called Pseudomurein. It  is composed of

The most common type of cell wall in Archea is the S-layer. It is also found in some  bacteria. It is composed of interlocking proteins or glycoproteins.

Many prokaryotes secrete sticky or slimy materials on their cells surface. These are  called either capsules or slime layers.

Capsules usually stick to the cell wall, some even covalently linked to  peptidoglycan.

Uses of capsule and slime layers include:

1. Helps in the attachment of microorganisms to solid surfaces.  2. Acts as virulence factors in certain disease, preventing the cell from  suffereing dehydration

Other structures on the cell surface include fimbriae and pili. Fimbriae allow for  cells to stick to surfaces. Pili allow for genetic exchange between cells (conjugation)  and helps in the adhesion of pathogen to specific host tissues.

Flagella is a structure that assists in swimming. These are helical in shape and have  different arrangements: peritrichous, polar, and lophotricous.

One of the most common bodies to includsion in prokaryotes is poly-B hydroxybutyric acid (PHB).

Glycogen, which is the polymer of glucose, is used as storage for carbon and energy

The cell accumulates inorganic phosphate. This is useful for a source of phosphate  for nucleic acid and phospholipid biosynthesis.

Certain bacterias produce endospores. They are highly differentiated cells that are  resistant to heat, harsh chemicals and radiation. They can be thought to be a  dormant stage of bacterial life cycle. They are present only in gram positive  bacteria. 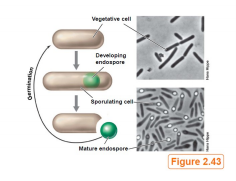 They can be found at the end of the cell

Near the end of the cell, (subterminal). Or

In polar flagellation, the flagella are attached at one or both ends of a cell. This  allows for the cells to move very rapidly and typically spin around. In peritricous  flagellation, flagella are inserted at many locations around the cell surface.

Prokaryotes often encounter gradients of physical or chemical agents in nature and  they respond by moving toward or away from the agent.

In the absence of a gradient, cells move in a random fashion that is described as  “runs”. When it stops and changes direction, it is known as tumbling.

What are the steps in applying scientific method?

What are the 6 research methods?