Economics: How to fulfill unlimited wants with limited resources. The study of how societies handle scarcity. 10 Basic principles:

● Principle 1: People, societies, and markets have to face trade offs. Societies need to decide between efficiency or equality

● Principle 2: The opportunity cost of a choice is what you give up to get it. Not only what you have to pay for a choice, but what you could’ve gotten by taking the other option. ● Principle 3: Rational people make marginal changes rather than thinking of decisions as black or white choices. They think purposefully and systematically.

● Principle 4: Incentives are the driving force of people’s decisions. Incentives can be wanting a reward or avoiding a punishment.

● Principle 5: With specialization, trade can benefit everyone. People, Companies, and Countries can do what they are best at instead of trying to be entirely self sufficient. ● Principle 6: Markets best facilitate economic activity due to decentralized decisions of many buyers and sellers.

What is the aspects of demend?

● Principle 8: The standard of living for a country is determined by its capability to produce goods and services. The better the productivity the better the standards. ● Principle 9: Inflation is caused when the government prints too much money. With more money, the value of each dollar decreases, the market adjusts.

● Principle 10: Not relevant for this microeconomics class

Now that we know what economics is, let’s look at what exactly economists do and study ● Economists have two roles.

○ Analysis the economy unbiasedly as a scientist by using the scientific method and testing theories about how the world works. They give positive statements to explain the world as it is.

What is a price ceiling?

If you want to learn more check out uconn archaeology

○ Use their discretion to improve the current state as a policy advisor. They give normative statements to tell how the world should be

● Economists can study two fields that intertwine yet are distinct

○ Microeconomics: focuses on how households and firms interact and make decisions in a market

● When studying the world, economists make assumptions to simplify the complex world and make models as a simplified representation of the world’s interworking. ○ Circular flow diagram: show how various forms of currency flow through the markets. Households and firms act as the main components while ‘goods and services’  and ‘factors of productions’ act as the two markets. Factor of

production include labor, capital, and land. 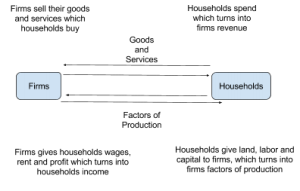 ○ Production possibilities frontier: shows how two goods can be made in correlation with each other given a certain amount of hours of production. 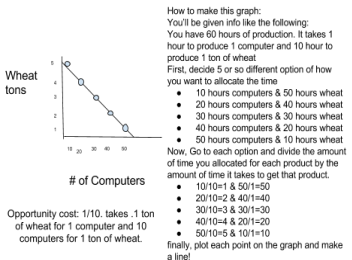 ○ Opportunity cost: slope, # of items needed to make other item and vice versa ○ On the line: you are always at maximum production. Don't forget about the age old question of denley jacobson

○ Inward of the line: deficient, not using production or resources to the fullest. ○ Outside of the line: Impossible, unless tech breakthrough or new resources ○ When comparing the lines of two different countries or companies, the line that is

steeper is better at making the product because they have a lower opportunity cost.

○ In perfect examples like above: the line will always be straight. A curved PFF would be because people are less inspired to work as more products are made, new worker are less efficient, new land/factories are not as efficient, etc.Don't forget about the age old question of didaskalos greek theatre

Now, we’re gonna look at what happens when companies and countries interact with each. We all know trade can benefit everyone, no one is self sufficient and specialization is easier. Let’s take two countries and compare their PFF of two products to see how trade impacts

Don't forget about the age old question of vcu stat 210

So how did both Japan and the US get more products than with what they started with!? Absolute advantage: country can make a good with less inputs in comparison to other country ● US has absolute advantage in both wheat and computers. It takes 100 hours to make one computer (vs 125 in japan) and 10 hours per ton of wheat (vs 25 in Japan) Comparative advantage: Instead of looking at the inputs required, C.A. looks at the opportunity cost of making a good. How much wheat it to make a computer and vice versa. ● Japan has the comparative advantage! In the US, one computer costs 10 tons of wheat but in Japan one computer only costs 5 tons of wheat

Now, it’s time to look closely at an economy. A market is a collection of sellers & buyers for a product. In competitive markets, each buyer & seller can create an effect on price. In a market that’s perfectly competitive, goods are identical & firms don’t control market price of the good.

Pricing causes movement ON the curve. Other factors cause movement OF the curve. Income increase will shift demand positively for normal goods and negative for inferior goods ● Normal goods: more bought as you become richer (Luxury goods and most goods) ● Inferior good: less bought as you become richer (used items, ramen, public trans.) Rise in related good’s price will positively shift if complements & negatively if substitutes ● Comp.: increase in the price of one causes the fall in demand for the other (Car Gas) ● Sub.: increase in price of one causes rise in demand for the other (Coke, Pepsi) Other factors can positively or negatively shift the curve: taste, advertisement, reputation, demographics, trends, preference, expectations, laws, natural disasters, competition, etc. ● Aspects of Supply: Quantity supplied is the amount of a product sellers sell at a certain price. Law of Supply states that as the price of a product rises, the Quantity Supplied for the product will rise. Supply schedules show this relationship. If you want to learn more check out history 2111 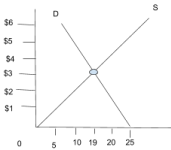 ● Now let’s look at an example to see if there would be a shift. The market for hybrid cars. What would happen if there was an increase in the price of gas?

○ Well the demand curve would shift to the right because as gas prices go up, more and more people will look to hybrid cars as an alternative

○ There is no effect on supply, because gas is unrelated factor for hybrid cars ● New situation: What would happen if new tech. can make hybrid cars for cheaper? ○ Now the supply curve will shift rightwards, because the innovation means that the quantity supplied goes up for the same amount of funding

● What if we combine both situations? Then there would be a shift in both curves, we could have two possible outcomes depending on the extent of the shift.

● Be careful, As quantity increases in both cases, prices remains ambiguous, it can either decrease or increase. It depends on how far each shift goes.

● Prices can fix surpluses and shortages. Its the equilibrium prices that let economists know how the economy is going and they can make economical decisions for their resources

Elasticity: refers to how much one variable changes in response to another variable. It can be represented numerically as the responsiveness Qd or Qs has to a particular determinant. ● Price elasticity of demand (How will quantity demand changes with price) ○ PED= (%change in Quantity Demanded) / (% change in Price)

● When calculating any percentage change use this formula.

■ This formula fixes the problem of using just the start value (instead of the midpoint) for the denominator, resulting in different answers depending on where you start.

● If elasticity is greater than one (steep) then it is elastic: Consumers or suppliers are very responsive to price changes. If the curve is completely vertical then the product is perfectly elastic.

● If elasticity is less than one (flat) then it is inelastic: Consumers or suppliers are not very responsive to price changes. If the curve is completely horizontal then the product is perfectly inelastic.

● If elasticity is one then it is called unitary elasticity.

What Causes elasticity for buyer?

What Causes elasticity for sellers?

● The easier sellers can change their product quantity, more elastic (beachfront homes aren’t easy to create because there’s only some many places vs new cars) ● Elasticity in greater in the long run than short because they can add factors, firms, etc. In elasticity, as your initial point keep changing, so does your elasticity! Don't get this confused with just slope or opportunity cost, where a straight line means a constant number. As you go from the top to the bottom of the demand curve, the elasticity decreases, because the more something costs the least of an impact an increase of price is going to make. Here’s how the Slope and Elasticity equations differ:

● Income elasticity of demand: How Qd changes in response to consumer income ○ IED= (%change in Qd) / (% change in income)

● Cross price elasticity: how a price change in good A can affect demand of good B. ○ CRED= (%change in Qd for good 1) / (% change in price of good 2)

● Price ceiling: The maximum a certain good or service can cost. An example would be Rent control. Ultimately causes shortages and rationing (long lines for first come first serve, basis of the seller might cause discrimination)

● Price floor: The minimum a certain good or service can cost. An example would be minimum wage. Ultimately causes a surplus (people have different options to go to) ● Both versions of price controls are made to try to help the poor and create equality. Always remember that things are flipped: when a ceiling or floor is binding/in action, The ceiling is below equilibrium and the floor is above equilibrium.

Taxes: The government can charge either the seller or the buy. Taxes are made to raise revenue so the government can pay for public goods. Taxes can be an exact percentage of a product or a fixed price per unit. Tends to shift demand down by the amount of tax. Then the price also goes down because you would have to adjust for taxes:

● If you have a tax of $1.50 on pizza, the demand curve would shift downwards. People would still demand 500 pizzas, but at $1.50 lower price, so that when the tax is added, it’s back to the original price.

● So when we have just the demand curve, we can learn how much of a tax is added. now let’s add in the supply curve! 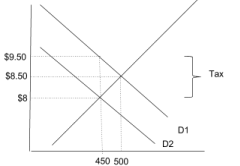 ● With the supply curve we can now see how the tax is being paid for. We look at the equilibrium price to see what the cost would have been before the shift was made. We then compare how far the equilibrium price is from what the sellers pay (D2) and what buyers pay (D1). we can see that 50 cents of the tax is put on the buyer's while $1 is put on the buyers. This is called the incidence. 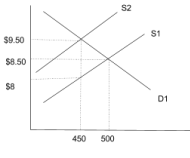 When there’s a tax on the suppliers, again, the line moves inwards to accommodate for the additional costs. But if you look at the affects, the end results are the same as the previous example.

the predominant keyboard instrument of the classical period was the