UNLV / Chemistry / CHEM 121A / What should one study matter?

What should one study matter?

What should one study matter?

Description: These notes will cover chapters 1-3 and embody the terms that Dr. Van Vo has specifically indicated for our first exam.

Chapter One: Matter and Measurement

What is physical properties?

• Chemical properties — changes that alter the chemical nature of matter - examples: reactivity with water, heat of combustion, pH, electromotive force,  flammability, toxicity, oxidation states, chemical stability  Don't forget about the age old question of What is the family of orientation?
We also discuss several other topics like What is resonance in a lewis structure?

What is physical changes?

• homogenous — compounds that make up the mixture are uniform throughout, only  1 of phase of matter observed, atoms/ions are presented in fixed proportions  throughout

- we are only responsible for knowing Mega-Pico*** If you want to learn more check out What are the 8 aspects that makeup personality?

• significant figures —IT’S ALL ABOUT THE ZEROS!!

- 1. ALL non-zero numbers in a measurement are significant

- 2. ALL middle zeros between non-zero numbers are significant

• dimensional analysis —used to convert between units of measurement

• density — is equal to mass per unit volume or Density = Mass/Volume - Quick tip: I simply remember the density as DMV… D=M/V.

- Laws that led to the Atomic view of Matter

• Law of Multiple Proportions — if 2 elements combine together to form 1 compound,  A+B will be equivalent to small WHOLE numbers

- History of Atoms  Don't forget about the age old question of Why are lines parallel when they have the same slope?

• Dalton believed atoms are the fundamental building blocks of nature that could not  be split apart into smaller particles (we now know that atoms can be split into  smaller particles such as electrons, neutrons, protons, cathode rays and  radioactivity)

• in chemical reactions, atoms would rearrange themselves and combine with other  atoms in new ways 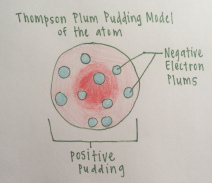 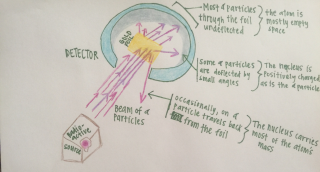 - Neutrons are calculated by taking the atomic number and subtracted it by the atomic  mass (Lithium: 7 - 3 = 4 neutrons)

- Quick Tip: It is highly recommended that the most used elements’ names and  symbols are memorized. Even better if you can name them all! This is important to  finding the correct mass number on a periodic table that does not have the full name  of the element on it. The one provided for our exam will not have element’s names  printed on it

- metals — transitional metals are located predominantly in the middle Group 3 B  through 2B with Group 1 A (excluding Hydrogen), Group 2 A, Group 3 A (not  including Boron), Sn, Pb, Bi and Po making up the main-group metals

- forms an ion primarily between a metal and a nonmetal

• charges are not shown in the compound name

- Quick tip: The bolded cations are the most used throughout this course - Anions are negatively charged ions 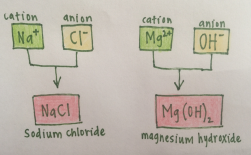 • polyatomic ions — groups of atoms held together by covalent bonds • MUST MEMORIZE PER DR. VO!!!

- Quick tip: I recommend making flash cards for the polyatomic ions to ensure that  the name, formula and charge is memorized because they will be used later in  stoichiometry problems, balancing equations, etc….

• prefix “mono” is not included

• when the element name begins with a vowel, the A or O at the end of Greek  prefix is dropped for pronunciation reasons

• When hydrogen is first in a compound, it takes the place as a metal and does  not need the greek prefix added to its name

• Ex: 12 g C is equal to 1 mol which is equal to 6.022 * 10^23 particles of C - Empirical Formulas —formula giving the simplest positive whole integer ratio of  atoms in a compound

• 1. — take each of the given masses and convert to moles

• 2. — Divide each element’s mol by the lowest mol value of the elements

• 3. — If each number is a whole number or very close then these numbers  represent the ratio formula for each element within the compound

• 4. — If one or more numbers aren’t whole numbers, multiply each by a number that  will bring the decimals to whole numbers (as in the example below) 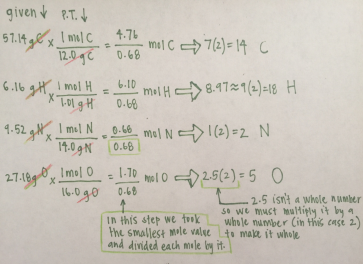 - molecular formulas- the formula for a compound

• Convey mass of each element to moles

• Ratio of moles of each element

- 2. Calculate the mass of the empirical formula

- 3. Determine how many empirical units are in a molecular unit by dividing the  molecular mass by the empirical one

- 1. Write out each compound and add subscripts to balance the charges  NaOH (aq) + FeCl2 (aq) ----> NaCl(aq) + Fe(OH)2 (s) • he products were formed simply by taking the cations, rewriting  them in the same order and then switching the anions. A cation  will always be with an anion within a compound

- 2. Now simply balance the equation so that each side has an equal  amount of elements on both sides

2NaOH(aq) + FeCl2 ----> 2NaCl (aq) + Fe(OH)2 (s) - balancing — As seen above, placing numbers in front of entire compound so  that each element has the same amount in both the products and the reactants  • Quick tip — Subscripts within a chemical equation should NEVER be  changed

- 1. Write the correct balanced chemical equations with the correct formulas - 2. Identify the given and unknown quantities for each

• Units given must be converted to moles

- 3. Use coefficients within the chemical equation to set up mole ratios - 4. After solving, convert quantities into the required units (typically grams)

- 5. Make sure that the answer is reasonable and the units are correct - basic — 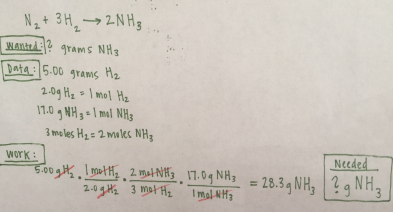 - limiting reactant — Perform multiple stoichiometry problems with the different  amounts of grams given to determine which elements limits the overall product  yield. 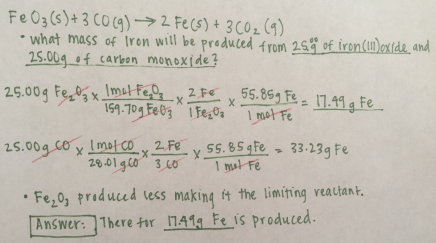 • Quick tip: In this limiting reactant problem, we were given only 2 values to work  with (FeO3 and CO). Some problems may involve 3 or more values. The  process would still be the same with the smallest value representing the  limiting reactant

What is the use of right brain?

What is the goal of the social-ecological systems perspective?