School: University of Nebraska at Omaha

Description: Here is the study guide for exam 1, along with essay questions from last springs test. They will NOT be the essay questions on the test but they are guidance to what he is looking for.

We also discuss several other topics like What is the purpose of phosphorylation?

o Interpersonal Skills- the ability to understand, communicate with, and work well with individuals and groups through developing  effective relationships We also discuss several other topics like What are reportable or notifiable diseases?

What do you mean by rational decision making? 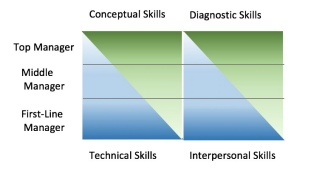 o Scientific ManagementDon't forget about the age old question of Whose responsible for refining religion?

 Made a clear distinction between operating and managerial activities

unexpectedly affected both the control group & the

∙ Group Study- the effects of a piecework incentive

o Workers established informal levels of  We also discuss several other topics like What is transpiration explain?

in the work place

 Grew out of the Hawthorne Studies

 Proposed that workers respond primarily to the social  context of work

∙ Advanced a theory that employees are motivated by  hierarchy of needs that they seek to satisfy Don't forget about the age old question of How much input, y, is produced for any given amount of factor inputs?

managerial beliefs about people and work

Environment of Organizations We also discuss several other topics like What is an example of stratification?

◊ The Internal Environment: Includes the factors that affect its  performance from within its boundaries

o Mission- its purpose or reason for being

o Management & Culture: managers are responsible for the  organization’s performance as they develop the visionary  mission, strategies, and plans to achieve success

 Organizational Culture- consists of the values, beliefs, and  assumptions about appropriate behavior that members of  an organization share

 Inputs- organization’s resources that are transformed into  products or services

 Transformation- the conversion of inputs into outputs

o Shareholders- the owners of a corporation influence

o The economy- no organization has control over economic growth, inflation, interest rates, foreign exchange rate, and so on

o Governments- national, state and local governments all set laws  and regulations that businesses must obey

◊ How Companies adjust to their Environment

 The classical view: view that the management’s only social responsibility is to Maximize profit

 Socioeconomic View: managements social responsibility  goes well beyond the making of profits to include

∙ People and organizations directly affected by the

behaviors of an organization and that have a stake in

 Subsidiary- a company owned and controlled by another  company, making up a combined company, called the

 A type of MNC that eliminates artificial geographical

of driving out competition

companies and their workers from foreign completion

∙ Ex. Starting your car in the morning

 Decision makers are limited by their values and

groups formed to achieve a goal

 An innate belief about something without conscious

∙ Consists of an existing group or newly formed team

interacting and then making a decision

∙ Developing a consensus of expert opinion from a

panel of experts who individually contribute through

∙ The process of generating and evaluating

3. 10pts Discuss the mechanism through which companies adapt  to their environment

What are some of the assumptions of economists about consumers?

What is the posterior area between the hipbones called?