Description: This 12 page study guide includes notes from every lecture pertaining to test 2, as well as 20 questions from past exams w/ answer key!

NOTES FROM ALL LECTURES PERTAINING TO TEST 2

Equilibrium is also known as optimal and efficient.

Market Failure: situation where the market, left on its own, fails to  produce optimal level of output. This justifies government  intervention.

A specific thing that is provided by the government, because the  market gets it wrong.

A public good is both:

What is market failure?

(A cost that affects someone that isn’t directly involved with the  consumption of a good.)

positive externality: something you benefit from

Negative externality: something that costs you something We also discuss several other topics like disadvantages of narrowcasting

INCORPORATE THE EXTERNALITY: SHIFT THE CURVE

The bigger change in demand when price changes, the more elastic  demand is.

If the price changes, and you buy the same amount you were  going to buy anyway, you didn’t respond. Don't forget about the age old question of a journal of the plague year themes

Your demand is not responsive or elastic.

If price changes and you buy a little more or little less than  what you were going to, then you were somewhat responsive  and elastic.

If the price changes and you buy a lot more or a lot less, then  you have a very responsive and very elastic demand.

We care because we can determine if we’ll make more money selling  more units at lower price or lesser units at higher price. It’ll also  determine how much margin/profit we’ll make on a product. Don't forget about the age old question of budgeted production needs are determined by

THINGS THAT MAKE A PRODUCT ELASTIC

2. luxury or necessity (luxury tends to be elastic)

3. how broadly the market is defined (broadly=elastic) for example,  a flight to new york is broad. a flight to boston on a friday at  five is narrow. Don't forget about the age old question of ast 104 syracuse
We also discuss several other topics like lawrence reitzer

4. size of good in consumer’s budget (large part of budget=elastic) 5. The amount of time one has to adjust to the price change

We can calculate elasticity if we know these 4 things:

If we get a number lower than 1, demand is inelastic.

REMEMBER: Elasticity is not slope. Elasticity can change on the same  demand curve, while slope can’t.

∙ How does the quantity demanded of X change when the price of  Y changes?

Combining Elasticity with imposing a tax

E of Supply + E of Demand

This is the percentage of any tax that will fall on the BUYER.

When Supply is on top, it falls on buyer.

When demand is on top, it falls on the seller.

The more elastic the supply is, the more of the tax falls on the  buyer.

The more elastic demand is, the more of the tax falls on seller.

55% of people get health care from where they work

15% buy through the market

not required to treat chronic cases.

ObamaCare is NOT socialized medicine.

Principal-agent problems: One party acting on behalf of another  party… but there is asymmetric or incomplete info.

Agent pursues his/her own interests instead of the interests of the  principal who hired him/her. This is the PROBLEM.

When one party to a transaction has less info than the other party.

enrolling in an econ class.

Hidden info. When one party takes advantage of another party’s lack of info.

Result: bad customers or bad products are more likely to be selected.

A way of reducing adverse selection in insurance. (States require all  drivers to have insurance, not just reckless drivers.)

This ensures that the insured population represents the overall  population.

∙ company spends 35,000, covers costs and makes a little  money. BUT THIS IS IF THEY GUESS RIGHT

∙ If more need surgery, they are screwed.

∙ So company increases costs to make sure they don’t get  screwed, and all 100 people have to pay more. that is risk  pooling.

Hidden action/behavior. Actions you take after entering a transaction  that take advantage of the other party’s lack of info.

When people change their behavior after they get insured. Rising cost of health care.

The 3 reasons costs are rising:

The population is aging. Healthcare on old people is 6x greater than  young people.

a set of adjustments to our current system.

1. Individual mandate: you now have to have insurance, or pay a fine.  (risk pooling)

5. Young people can stay on parents insurance until 26 years old. 20 QUESTIONS FROM PAST EXAMS

1. You are the Pricing Manager for a product that is a small part of a  consumer's budget and has relatively few substitutes. Your recommendation  to your boss would be...

a. Lower the price of this good if you want to increase revenues because  the demand is most likely elastic

b. Lower the price of this good if you want to increase revenues because  the demand is most likely inelastic

c. Increase the price of this good if you want to increase revenues  because the demand is most likely elastic

d. Increase the price of this good if you want to increase revenues  because the demand is most likely inelastic

2. Which of the following accurately characterizes a quasi-public good such as the Kansas Turnpike (which is a toll road):

a. It is rival in consumption and non-excludable

b. It is non-rival in consumption and non-excludable

c. It is non-rival in consumption and excludable

d. It is rival in consumption and excludable

3. The demand curve for your product is P = 220 – 2Q. Which of the following  comes closest to the price elasticity of the demand for this product (in  absolute value) as the price increases from $60 to $68?

4. What is the term, discussed in lecture, where the market- left to operate on its own –fails to produce the efficient or optimal level of output?

5. Which of the following is most likely correct?

d. Actually all of the above are most likely correct

Use this to answer the next three questions:

6. What is the elasticity of supply for this good?

7. Based on elasticity of demand, which is most likely correct about this  good?

a. It is most likely a small part of consumer's budget

b. It is most likely a luxury

c. It is most likely a good that has few or no substitutes

8. Assume, as we did in lecture, that a $10 tax is placed on the seller of this  good. What portion of that $10 tax will fall on the buyer of this good?

9. If two goods are complements and they are both normal goods what do we know?

a. Their cross price elasticity is negative and their income elasticities are  both positive

b. Their cross price elasticity is negative and their income elasticities are  both negative

c. Their cross price elasticity is positive and their income elasticities are  both positive

d. Their cross price elasticity is positive and their income elasticities are  both negative

10. Which of the following accurately characterizes a private good (such as a  Starbuck's latte)?

a. It is rival in consumption and excludable

b. It is non-rival in consumption and non-excludable

c. It is non-rival in consumption and excludable

d. It is rival in consumption and non-excludable

Use this graph to answer the next 5 questions:

13. Consumer surplus in this market comes closest to

14. and 15. Now assume it is discovered that this good exhibits a negative  externality. "Incorporate" this externality as we did in sample questions and in class. After incorporating this externality the new quantity in the market will  be

And the new consumer surplus in the market will be

Product Y has a price elasticity of 1.25 (in absolute value)

Choose the product whose price you would decrease in order to increase  revenues, and reduce that price by 10%. Which of the following comes  closest to the new quantity that will be demanded of that product after the  price decreases?

17. Which of the following comes closest to the new revenues you will earn  from that product following the price decrease and corresponding change in  quantity demanded?

18. Which of the following is correct based on the discussion of the Affordable Care Act (also known as "Obamacare") in the text and in lecture?

a. Under the Affordable Care Act an employer with 300 employees is  required to offer health insurance to his employees

b. Under the Affordable Care Act an employer with 300 employees is  required to either offer health insurance to his employees or pay a fee

c. Under the Affordable Care Act and employer with 18 employees is  required to offer health insurance to his employees

d. Under the Affordable Care Act an employer with 18 employees is  required to either offer health insurance to his employees or pay a fee

d. None of the above

Use the following graph to answer the next questions about externalities. 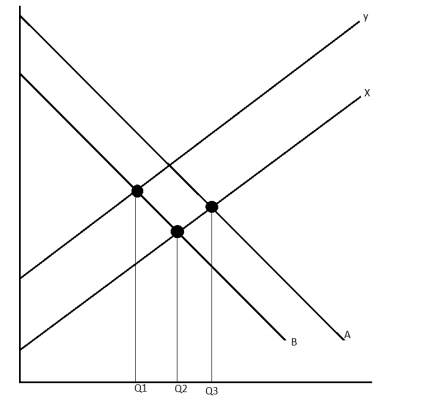 20. Assume we have a product and this product exhibits a negative  externality. Which of the following is correct?

a. Incorporating this negative externality takes the form of shifting Curve  X to Curve Y

b. Incorporating this negative externality takes form of shifting from  Curve B to Curve A

c. Incorporating this negative externality takes for of shifting from Curve  Y to Curve X

d. Incorporating this negative externality takes for of shifting from Curve  A to Curve B