Description: These notes cover everything for our first exam, according to the list Dr. Getzfeld sent out today that includes everything we need to know for the test! So that would be everything-Freud, phobias, anxiety disorders, panic attacks, PTSD, abnormal behavior, behaviorism, DSM-5, OCD, Agoraphobia, etc.

• 29 of these are about anxiety disorders, as well as OCD and PTSD. This  includes:

PHOBIAS: an unreasonable fear about a situation or object

∙ Have to consider age appropriate behavior in children (fear might be expressed in  tantrums, freezing or clinging)

∙ Fear is out of proportion to the actual danger/situation

phobias are Developed thru what?

We also discuss several other topics like crju 4110 study guide

∙ Can have multiple phobias

∙ A lot of them can develop into GAD if person has a bunch of phobias  o Stimulus generalization: responses to a stimulus are also elicited by similar  stimuli

∙ Prevalence rate of ~9% in USA—most of them do NOT seek treatment ∙ Most common: animal phobias, insects, heights, tight spaces, thunderstorms, blood ∙ Ppl w/a phobia often avoid the object or thoughts about it

what are the treatments for phobias according to Joseph Wolpe?

Don't forget about the age old question of istm gwu

o Virtual reality! Can be really helpful w/PTSD If you want to learn more check out microbiology exam 2 study guide

o GAD may develop when these assumptions are applied to everyday life ∙ Biological theorists believe that GAD is caused mainly by biological factors—the closer  the relative, the greater chance of having it

o Developed by Wells; suggests that the most problematic assumptions in GAD are  the individual's worry about worrying (meta­worry)

o Certain individuals consider it unacceptable that negative events may occur, even  if the possibility is very small; they worry in an effort to find “correct” solutions o Avoidance theory

o Developed by Borkovec; holds that worrying serves a “positive” function for  those with GAD by reducing unusually high levels of bodily arousal Don't forget about the age old question of which document did the second continental congress send to king george iii to reaffirm colonists’ allegiance to him, but not to parliament?

o Excessive anxiety & worry, occurring more days than not for at least 6 months o Difficult to control the worry

 Restlessness or feeling on edge

∙ One of the most powerful forms of societal stress is poverty (live in greater risk), but  GAD is common in Western society

o Neurons have specific receptors (like a lock and key)

∙ Do physiological events CAUSE anxiety? Or other way around? We don’t know ∙ Biological treatments

o Rebound anxiety with withdrawal and cessation of use

∙ Malfunctions in the feedback system are believed to cause GAD

o Electromyograph (EMG) is the most widely used; provides feedback about  muscle tension

o Found to have a modest effect but has its greatest impact when used as an adjunct  to other methods for treatment of certain medical problems (headache, back pain,  etc.)

AGORAPHOBIA: fear or anxiety about 2 or more:

o Being in open places –like to stand near doors, easy exit

o Being in enclosed spaces

o Standing in line or being in a crowd

o Being outside of the home ALONE

o –they fear escape from these situations will be difficult or impossible situations  are avoided, require a companion, or are dealt with while having extreme fear or  anxiety

o can have agoraphobia without panic disorder

­fear of being in public places or situations where escape could be difficult or help unavailable,  should they panic or become incapacitated

• OCD; know the difference between obsessions and compulsions ∙ 1­ obsessions: persistent thoughts, ideas, impulses, or images that seem to invade a  person’s consciousness

∙ 2­ compulsions: repetitive & rigid behaviors or mental acts that ppl feel they must do to  prevent or reduce anxiety

o provide a form of relief

∙ unlike phobias, the ‘dangerous event’ is INTERNAL

∙ may have connection w/anorexia or autism

• PTSD; know the difference between this and Acute Stress Disorder. Pay attention to the timeframe here!

o As much as 80% of all cases of acute stress disorder develop into PTSD ∙ Symptoms:  must last more than a month

o Depersonalization­ feeling detached, like you’re living in a dream

∙ If so, witnessing traumatic events does not include those only seen via electronic media,  tv, movies, or pictures.  This means they need to witness the events in person ∙ This indirect exposure (seeing horrors on tv etc.) also applies to those older than 6 up to  and including adults

∙ Must meet all 6 criteria: 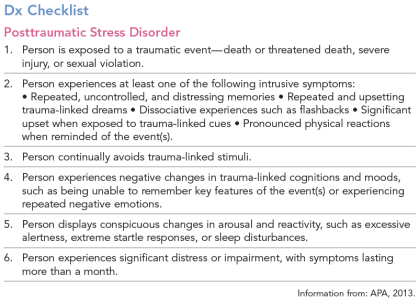  General fear of functioning poorly in front of others

 In both forms, ppl rate themselves as less competent than they actually  arerelated to self­esteem

∙ SOCIAL PHOBIA IS different from:

o School phobia: the environment is negative, not the building

o Separation anxiety disorder: ppl who avoid social settings bc of fear of being  separated from, for ex., mom & dad –requires parents to stick around in situations that are not socially appropriate

Cognitive theorists contend that people with this

disorder hold a group of social beliefs and

expectations that consistently work against them,

• Definitions, and differences, between anxiety and fear, and definition of  panic attack (both expected and unexpected)

∙ Anxiety: a mood state characterized by negative affect & somatic symptoms of tension o A person with anxiety apprehensively anticipates future dread or misfortune— afraid of the future & convinced it will be bad

o May cause subjective unease in humans

o Ppl w/anxiety have a higher rate of suicidal ideation & suicide attempts  o Neurotic Paradox: When severe anxiety does not dissipate even when no threat  is present!

o Fear is a response to an immediate threat (reality­based)

o Can result when a real threat emerges

 Happen in the ABSENCE of real threat

 Expected: ex. Before a game or going to the doctor

∙ Nocturnal panic attack: wake up in state of panic (happens to about 40% w/panic disorder)

 Often feel like they will die, go crazy or lose control

 Accompanied by at least 4 symptoms

 2. One or more of the attacks preceeds:

• 21 questions are on the introductory material:

1. Statistical Frequency: behavior is abnormal if it occurs rarely in relation to the general  population

2. Social Norms: behavior is abnormal if it deviates greatly from accepted social  standards/values/norms

3. Maladaptive Perspective: behavior is abnormal if it interferes w/one’s ability to  function in life

o Presents: what is the main reason/problem for the patient to come for help?  Aka what is the problem as would be written up on the referral sheet?  Sometimes this isn’t the real, underlying problem

 Ex. Marital problems… but psychiatrist discovers that really they have a  drinking problem & that’s the real issue

o Clinical description: all symptoms that make up the disorder

o Prevalence: how many people have this disorder?

o Incidence: how many cases do we see per year? (CDC)

 Chronic: long­lasting, sometimes lifetime—doesn’t mean it has no cure or we can’t treat it.

∙ Can we help them? Yes. Can we cure it? Maybe not.

∙ Time­limited: improves on its own in a relatively short time (ex. PE

 Acute: come out of the blue/begins suddenly

 PTSD­ has to be at least a month after event; acute onset stress disorder  can arise quickly after event

o Etiology: why a disorder begins & what causes it

∙ Born 1856 May 6­ in Freiberg, Moravia, now Pribor in the Czech Republic ∙ Parents were jewish but Freud was atheist

∙ 1938: emigrates to London, dies there a yr later

o Theory: present at birth, same size & strength for all

 If you can’t do what you want in the moment, the id will make you

o Our IDs are all the same size/strength (not really true probably­ for ex, ppl have  varying sex drives) –Freud said men & women had identical needs! First to  sexualize women . . .

 If something is off, it’s bc their ego or superego is off

o Only part of personality present at birth

o often times the ID wins out over EGO

o Last piece of psyche to develop – everybody has it

o Not healthy if superego is too strong OR too weak

o Things like anxiety & eating disorders can be due to an overactive superego ∙ Ego develops out of ID, & superego out of ego3 are often in conflict  ∙ Garbage Pail Model

∙ PSYCHOSEXUAL STAGES : everyone goes thru these in this order o ORAL (0­18 months)

 This is when potty training should happen

∙ Causality: behaviorist motivation based on past experiences

∙ Teleology: our destiny. We are drawn to our future even though we have no idea what it  includes

∙  does the past influence your behavior?

If you over­depend on these, they’ll weaken. . .you can’t always be so on­guard. 1. Repression: person avoids anxiety by simply not allowing painful /dangerous thoughts to become conscious

2. Denial: person refuses to acknowledge existence of an external source of anxiety  a. Presents itself in anorexia, alcoholism

b. Most primitive dm & hardest to break through

3. Projection: person attributes own unacceptable impulses, motives, or desired to others  4. Rationalization: person creates a socially acceptable reason for an action that actually  reflects unacceptable motives

a. ‘the professor is out to get me­that’s why I failed’

b. the alcohol did it not me

5. Displacement: person displaces hostility away from a dangerous object & onto a safer  substitute

a. Aka ‘kicking the dog’

b. What bullying is all about

6. Intellectualization: person represses emotional reactions in favor of an overly logical  response to a problem

a. ‘there’s a conspiracy to bring me down!’

7. Regression: person retreats from an upsetting conflict to an early developmental stage at  which no one is expected to behave maturely/responsibly

transference (act or feel towards therapist as they do/did towards important ppl in their lives), dream interpretation, etc.

­first to recognize importance of

o Resistance­ find out what patient is not telling us

o Dream interpretation—look for themes­ some therapists do, some don’t  o Catharsis­ emotional release (get a good cry out)

o BF Skinner: did not work w/humans (rats & pigeons)—operant conditioning o Raised his daughter Deborah Skinner in a playpen box (Skinner box) o Any behavior that is reinforced or rewarded is likely to be repeated

o Skinner did not believe in the unconscious mind

o His question: does watching violence lead to violent behavior?

 contact comfort is so important for raising a child!

o Like psychodynamic theorists, behaviorists believe that our actions are determined  largely by our experiences in life

o Model began in labs where conditioning studies were conducted

o Aim to identify behaviors that are causing problems & replace them with more  appropriate ones—therapist is ‘teacher’ rather than healer.

COGNITIVE MODEL : proposes that we can best understand abnormal functioning by looking at cognitive processes

­no evidence that symptoms are ordinarily  acquired thru conditioning

­can be tested in a lab

• Know about the DSM-5: Purpose, what it is used for, what it contains  and more importantly what it does not contain

∙ Does NOT tell you how to treat

∙ Relies on clinician’s judgment, which could be wrong

 DSM­5 requires clinicians to provide both categorical and dimensional  information as part of a proper diagnosis.

 Categorical information refers to the name of the category (disorder)

indicated by the client’s symptoms.

 Here, reliability means that different clinicians are likely to agree on a  diagnosis using the system to diagnose the same client

 DSM­5 appears to have greater reliability than any previous edition

 Reliability is still a concern

 Predictive validity is of the most use clinically

 DSM­5 has greater validity than any previous edition

 Validity is still a concern

reliability than the previous DSMs