/ Calculus, math / CAL 105 / What is the meaning of tensile fractures in rock deformation?

Description: Week 7 notes, going into the origin of the Earth

- natural faults are a type of shear fracture

Structures in zones of continental rifting

Normal fault: the top side slips down relative to the bottom side

- A normal fault occurs when the crust is extended

- Hanging wall has moved down relative to the footwall

What is the meaning of shear fractures in rock deformation?

- A valley which is defined by two normal faults (horsts), inclined in opposite directions. 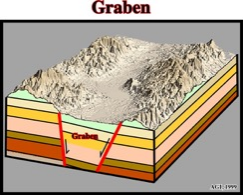 Structures in zones of plate convergence :

- Tibet, area of shortening and thickening of continental crust

Reverse fault: the top side slips up, relative to the bottom side  If you want to learn more check out What is the rate of change of temperature with height called?

What is the meaning of tectonic associations of faults?

A thrust is a low-angle reverse fault

- Right-slip fault, when crossing the fault, have to go down to your right to find the  fault

- San Andreas fault unique because of its “Big Bend”

- Restraining bends cause overlap of the crust, creating mountains

- Normal faults are most common in right zones

- Thrust faults are common in zones of plate convergence

- Strike-slip faults are dominant in transform zones  Don't forget about the age old question of What is equality of opportunity in sociology? 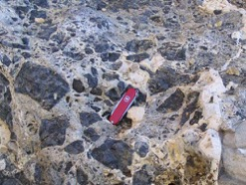 Don't forget about the age old question of What does positive strain mean? 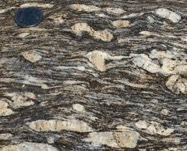 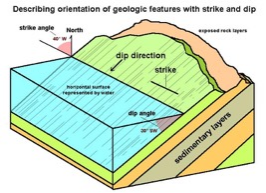 Don't forget about the age old question of What is the meaning of ethnocentrism in anthropology?

- An anticline is afold that closes upwards

- The oldest rocks are in the core of the fold

- A syncline is a fold that closes downwards

- The youngest rocks are in the core of the fold 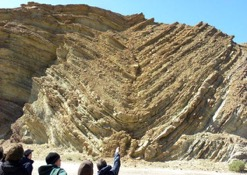 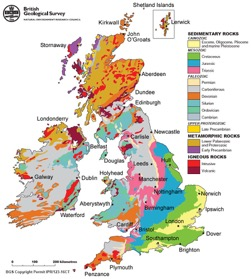 We also discuss several other topics like What is the meaning of conditional proofs?

Origin of the Earth and the Solar System:

Stages in the formation of the solar system:

1. Formation of solar nebula and protostar

- Processes started 4560 million years ago, and took a few tens of millions of years to  complete.

- Would not be able to distinguish space from a vacuum

- Suppression of gas and dust creates Eagle Nebula, starts to contract under its own  gravity and start a new star or several

- gravitational collapse is first step of creating a star

- a diffuse, roughly spherical, slowly rotating nebula begins to contract   - As contact, start to spin, “concentration of angular momentum” (like a figure  skater)

- centrifugal force, shorthand way of expressing when something rotates, in order  to keep it together have to pull in ( flying away from the force)

- Clouds collapse into a disk

- central part of disk collapses to form a protostar

- hot, fairly high density ball of gas in the middle

- grands of rock dust, minerals and ices accreted to form km-sized bodies   - gas getting more concentrated as result of collapse of the cloud   - first, form dirty snow. Bits of dust and ice stick to each other   - dirty snow flakes turn into dirty snowballs, they grow bigger until  becoming big enough to regard as celestial object

- larger objects pull in more and more material, gas, and planetesimals   -while planets were developing, sun developed from a proto-star.   - nuclear fusion produces massive amounts of energy   - gas in outer part of the solar system was able to form the gas giants   ^one big problem with this theory of creation of planets   - most gas giant planets found around other stars are very close to  their parent stars

- Sister planet , remarkably similar in size and composition to Earth

- Curious why different from Earth in this way

- Do not know how these things were formed

- About half the diameter of Earth

- No surface water, but there may have been in the past

- Alluvial channels on Mars look like once stream channels

- Saturn’s rings massive compared to its rings, but Titan could be responsible for  movement of the rings

- Larger than the planet Mercury

Origin of the Earth-Moon system

- Theories for the origin of the Moon

- Moon was formed as separate, mini planet and captured by the orbit of  the Earth

- Formation together w/ the Earth in the same orbit

- Formed out of interplanetary catastrophe

^ most of these not possible or improbable.

- Capture : not possible unless two objects touch each other   - Fissure: no way Earth could spin so rapidly to throw the moon off.   - Formation W/ Earth: possible, but then why is the moon so much larger   comparison to the Earth compared to other planets and their moons.

- Moon pushed further and further away by time and forces

- After formation of the moon, the Earth’s mantle may have been largely molten - An early crust may have formed on magma ocean, made of anorthosite: not now  preserved (composed almost entirely of plagioclase)

- Earth’s moon a clue to the nature of the early Earth:

- The lunar highlands are made of anorthosite

- Lunar mare are floored by basalt

- Lunar surface is dominated by impacts

- Mare Orientalis: a multi-ring impact basin ( on other side of the moon)

- Result of bringing sizable object in and hits the moon, produces

700 km crater. Rings are effects of progressive collapse into lunar

- Mare are themselves impact basins

- Lunar “seas” were formed as giant impact structures before 3.9 Ga (gigayears),   later filled by flood basalt. Similar impacts must have occurred on Earth.   - Because Earth so close to moon during all   this violent collision, impact events.

- Many early impactors may have been comets, which supplied Earth with water   and organic compound; may be formed Earth’s oceans and atmosphere

- No life, and hence no oxygen

- Oxygen almost 100% due to photosynthesis

- Remember Eons and Sequence by which they occur

What is the meaning of reaction time in performance outcome measures?

How have you seen patriarchal models at work among people and in humanity's relationship with the environment?