Description: Covers all the review topics!

What is the common name for C16:0 (a very important lipid)?

Quiz 11 Study Guide: Lipids 1) What are the two major classes of Lipids. >Fatty acids & Isoprenoids (fuel, structure, and signaling) 1) Know the shorthand nomenclature for lipids. What is the common name for C16:0 (a  very important lipid)? Draw: 1) C16:0 2) C16:1 3) C18:3ω3 4) 9t-18:1 Palmitate WitIf you want to learn more check out What does that mean?
Don't forget about the age old question of asu mat 275
If you want to learn more check out texas state forensic psychology
If you want to learn more check out howard marmorstein
We also discuss several other topics like bronzing anatomy
We also discuss several other topics like shannon pollock lawyer
h shorthand nomenclature, it describes the total number of carbons, # of double bonds and the  position of the double bond(s) in the hydrocarbon tail. carboxyl carbon is C-1  2) What is the other shorthand name for C18:3ω3? C18: 39,12,15 3) What are omega-3 and omega-6 acids used for? Which is preferred and why? Omega-3 fatty acids are important because the body can’t synthesize them (must be obtained from  the diet), they serve as precursors to some hormones, and they are thought to have many health  benefits although it is not absolutely certain yet. Eicosanoids are derived from both omegas 3 and 6.  3 is preferred because its eicosanoids are less inflammatory than 6’s eicosanoids. 3’s are more  responsive to homeostasis and are broken down faster, while 6’s take longer for the body to get rid  of.  4) Why does a fatty acid have a higher energy density than glucose? Fatty acids are fully reduced due to the carbons only being bound to hydrogens and other carbon’s,  no oxygen molecule like glucose: more electrons! (TAGs form high density anhydrous fat droplets  and fatty acids form micelles. Fatty acids also have a low pKa so they are stored as neutral TAGs) 5) Name two reasons why fatty acids are dangerous.High concentration of free fatty acids in the blood would disrupt the pH balance of cells (FAs are  strong acids). They also form micelles which dissolve membranes and denature proteins.  6) Draw a triacylglycerol with C14:0 at the C1 and C3 positions, and C14:1 at the C2  position. Identify the ester linkage of one of the fatty acids. 7) Why do triacylglycerols have a higher energy density than glycogen? Recognize that this  reason, combined with the answer to #5, explains why fats are very important to survival  (remember the poor ruby throated hummingbird). Triacylglycerols have more electrons and TAG’s can store more energy is because theyre  hydrophobic: so TAG’s are stored in the anhydrous form. Glycogen would require some storage  space for water thus decreasing the energy density. TAG’s don’t require water storage allowing for  it to have higher energy density than glycogen.  Ruby throated hummingbird flies non-stop across the Gulf over 500 miles because triacylglycerol  (the storage form of fatty acids) has 6x more energy per gram relative to glycogen. 8) Draw phosphatidate with two C14:0 fatty acids. 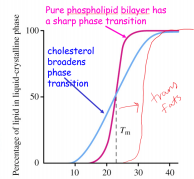 membrane more fluid because it is already breaking  the VDW packing. At high temperature, with  cholesterol, it is quenching the thermal dynamics.12) One function of cholesterol is to maintain bilayer fluidity. Based only on that knowledge,  hypothesize why a person with a diet rich in take-out food would have high levels of  cholesterol. Since take out foods generally contain a large amount of trans-unsaturated fats, these straight  bonds would stack very easily, making the membrane much more rigid. Much more cholesterol  would be needed to squeeze between these fats as a sort of steric hindrance to keep fluidity and  prevent stacking as best as possible compared to the amount of cholesterol needed for already  kinked, cis-unsaturated fats.  13) Why is cooking in transfat-free oil at major restaurants not an effective means of  reducing transfats in your diet? How could you make it safer? It is not an effective means of reducing trans fats in the diet because at equilibrium, 96%, if heated  sufficiently, of the fat goes trans. You could make it safer by having the restaurant's change the oil  more frequently. Chapter 27 (Fatty Acid Degradation) 1) Describe the process by which glucagon induces the release of fatty acids from  adipocytes (step 1, glucagon binding to the glucagon receptor activates PKA…). The  important lipases are Adipocyte Triacylglyceride lipase (ATGL), Hormone Sensitive Lipase  (HSL), and MAG lipase. Glucagon binding to glucagon receptor activates PKA. PKA phosphorylates perilipin, releasing  coactivator. Coactivator binds to adipocyte tiacyglyceride lipase to form active lipase (ATGL). ATGL:  CA complex associates with lipid droplet and cleaves TAG to release DAG and FA. DAG remains on  the surface of the lipid droplet. PKA activates Hormone Sensitive Lipase (HSL), which cleaves DAG  and releases MAG & FA . MAG lipase cleaves the last FA chain and releases glycerol. 2) What is the fate of glycerol released by MAG lipase? The glycerol released during lipolysis is absorbed by the liver for glycolysis and gluconeogenesis 3) What is the function of albumin? What role does albumin play in pharmacodynamics? Albumin is a serum protein that pick up fatty acids and transport it to cells. Albumin has holes in it  that carry fatty acids. Albumin is a chief transporter of drugs and toxins. and 4) Explain how Le Chatelier’s principle is applied in fatty acid transport across the plasma  membrane into cells (HINT: think about Glut 4 as an analogy). What is the role of ATP in this  process? What is the role of pyrophosphatase? The hydrolysis of pyrophosphate (catalyzed by pyrophosphatase) not only encourages coupling by  being extremely favorable, but it also eliminates 1 molecule of pyrophosphate from the equation,  thus making less products in the equilibrium. So, by Le Chatelier's principle, more reactants must  be used to make up for the eliminated products, therefore encouraging fatty acid transport.5) Sketch the mechanism of the acyl-carnitine translocase. 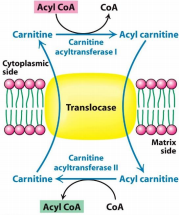 6) If I increase the flux of acetyl-CoA in the CAC, can I produce enough OAA to make  glucose? 2 carbons enter the CAC from acetyl CoA, and 2 carbons leave in the form of CO2: no net gain of  carbons. Therefore, increasing the flux of acetyl CoA would not yield excess carbon to make glucose  from OAA. However, if an odd-numbered fatty acid enters the CAC through conversion to succinyl  CoA (a 4 carbon intermediate), then there will be excess carbon being converted to OAA to make  glucose.  7) Sketch a saturated fatty acid undergoing the four steps of β-oxidation (identify the  chemical steps). Identify the energy producing steps. I would give you the enzyme names if  needed

1) Acyl-CoA Dehydrogenase oxidizes the β-carbon  to generate a trans double bond between the α & β  carbons. Generates FADH2 2) Enoyl-CoA Hydratase adds a water to the β carbon. 3) β-Hydroxyacyl-CoA Dehydrogenase oxidizes the  β-alcohol to a ketone. Generates NADH 4) Thiolase uses CoA to cleave the β-ketoacyl CoA,  releasing Acetyl CoA for the CAC.  Each cycle generates 1 FADH2, 1 NADH, and 1  Acetyl-CoA. (Note that the last reaction will  generate 2 acetyl-CoAs) 8) For a C20:0 fatty acid, how many FADH2, NADH and Acetyl-CoA’s are produced? 10 Acetyl-CoA’s and 9 FADH2 and 9 NADH 9) Draw the Acyl-CoA derivative of C6:1. Now draw the catalytic step(s) that converts it to a  substrate for β-oxidation. What is type of enzyme is needed in this reaction? What is the next  step in the β-oxidation pathway? It needs an isomerase to get the double bond onto an even carbon. Once it’s in the trans-2  conformation it can undergo hydration  10) Draw the Acyl-CoA derivative of C7:1 . Now draw the catalytic step(s) that convert it to a  substrate for β-oxidation. What is the next step in the β-oxidation pathway? Since the double bond is on an even carbon, that it requires a 2,4 dieonyl CoA reductase and an  enoyl CoA isomerase. After the t2-enoyl CoA is formed, it will undergo hydration. 11)Why does 5t-C14:1 interfere with mitochondrial metabolism (in your answer, identify  the step and the reason)? This fatty acid is very difficult to transform into a t-2 enoyl CoA needed for complete oxidation  (inhibits acyl-CoA dehydrogenase in the 1st step of b-oxiation), and it accumulates and takes an  indefinite amount of time to get rid of. As it accumulates, it inhibits other pathways and slows  energy production by 20%.  12) What is the final fatty acid product in the β-oxidation of a fatty acid with an odd number  of carbons? How is this important to gluconeogenesis? Succinyl CoA. Important because fatty acids in animals cannot be converted to glucose unless you  have an odd number c chain. 4 c succinyl CoA ???? OAA ????glucose  13) In the net reaction for the transport and beta-oxidation of C16:0, what is the cost in ATP?  What step requires ATP? The equivalent of 2 ATP molecules is consumed in the activation of C16:0, in which ATP is split into  AMP and 2 molecules of orthophosphate. 14) What are ketone bodies and what are they produced from? What is the physiological  significance of ketone bodies (under what physiological state do they form) and what  purpose do they fulfill? Ketone bodies are synthesized from the condensation of acetyl CoA in liver mitochondria and  secreted into the blood for use as fuel by some tissues such as brain and heart muscle when glucose  is low. Ketone bodies are source of Acetyl CoA and reduce the brain’s need for glucose. Serves as an  alternative fuel to reduce the brain’s appetite for glucose. 15) Can you survive on fatty acids and ketone bodies alone? We cannot survive on fatty acids and ketone bodies alone because we need glucose to keep the CAC  running steadily to produce essential metabolites for cells and your brain. If you only had FAs and KBs, your body would start catabolizing amino acids to generate OAA.Glucose is required because the Cori Cycle, which takes the lactate made in muscles/RBC’s and  turns it back into glucose in the liver via gluconeogensis creates OAA as an intermediate, which can  be shunted/diverted off to the CAC to replenish any OAA that left the Cycle during an anabolic  process. Additionally, the carbon portion of glucogenic amino acids can be broken down to  pyruvate, which can be made into OAA via pyruvate carboxylase. Without glucose, OAA that leaves  the Cycle via an anabolic process is never replenished, and the Cycle eventually shuts down.