Description: These notes go over the structure of a play. Includes features such as, Aristotle's 6 Elements and Freytag's Pyramid.

How does the play spur your own thought processes and understanding?

how does the play pertain to us in the “here and now,” and what can we take away from it?

what messages about the nature of life or the “universal human condition” are contained in it?

Kacilyn Hilliard 1500104 Theatre 12 September, 2016 Lecture 2: Structure of a play I. Structure of a play A.Dramatic structure involves the overall framework or method the playwright uses to  organize the Don't forget about the age old question of For example, how could bees learn to work together and understand their roles in order to survive, and how could they learn this through evolution?
If you want to learn more check out pia stålhandske
We also discuss several other topics like What should one do to determine the wage and rental in the economy?
We also discuss several other topics like desert assault john kane
If you want to learn more check out What is a small kinship based group of foragers who hunt and gather for a living over a particular territory called?
Don't forget about the age old question of iron age towson
dramatic material and action. B. Basic Idea -PLAY: a pla or “blueprint” for an entire theatrical production. -Typically contains:  1. Dialogue: words spoken by characters  2. Stage Directions: II. Aristotle (His 6 elements) A.Six elements -These 6 elements work together to create a special world on the stage. -Their relative significance varies considerably from play to play. 1. Plot  - organization of the action of a play or the arrangement of the incidents   we see onstage  - An organizing principle that gives a play its unity (a beginning, middle,   and an end). 1. Linear Plot: the events of the drama progress forward and sequentially  in TIME (chronologically) 2. Causal Plot: (“Cause-to-effect”) one ever leads to (results in) the next;  a sequence of events (domino effect) 3. Cliff Hanger: stops at climax; the outcome of the conflict is not shown. 4. Flashback: variation on linear structure occasional scenes that  dramatize events that occur before the point of attack.  A. Conflict -Generally 2 or more characters want the same thing or want different  things to happen -work against each other until an outcome is decided -the conflict between characters can also represent or embody a larger  issue (good and evil, right and wrong…)  1. Man vs Man  2. Man vs nature  3. Man vs himself  4. Man vs society -Freytag’s Pyramid 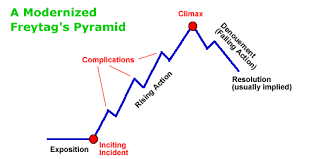 1. Exposition: Info that sets the scene.  2. Inciting incident: conflict introduced at point of attack  protagonist takes first action against the conflict at the inciting incident  at the beginning of the play, we learn about uneasy balance of force that   exists (potential for conflict)  3. Rising action: Units of action that are dramatized during a play that   build in emotional intensity.   major forces in conflict gather info, lay plans, encounter obstacles.  stakes become higher for the characters  audience empathy becomes stronger and e become increasingly   involved in the action  4. Climax: moment in a play when the conflict is finally addressed  protagonist either succeeds or fails but the conflict is ended  all moments of the play lead up to this point  often point with most tension for the audience.   5. Falling action: (Denouement) all loose ends of plot are tied up, usually.   The conflicts and the climax are taken care of, although the author may   sometimes leave audience hanging.  6. Conclusion/Epilogue: Play ends - Other aspects of plot:  1. Subplots: secondary lines of action   2. Discovery: when something important is found, revealed, or realized during   the action of a play  3. Reversal: When what seems like a  - “Deus ex machina:”   ~Today: stands for any contrived conclusion to a play or any other form of   literature that tells stories.  ~Hallmarks are: manipulated climaxes, including rehearsals and discoveries.  ~Often an act of desperation. 2. Character  -These are the people presented in the play  -each character has own distinct personality, age, belief, background,   language…  -Protagonist: central character of the play  -Antagonist: works against protagonist.  -Three different ways we get info: 1. What characters say about them 2. What others say about them 3. What the character does  ***ACTION is the most important way of defining a character 3. Thought   -What a play means as opposed to what happens  -the abstract issues and feelings that grow out of the dramatic action.  a. what messages about the nature of life or the “universal human condition”   are contained in it?  b. how does the play pertain to us in the “here and now,” and what can we   take away from it?  c. How does the play spur your own thought processes and understanding?4. Language   -word choices made by the playwright ad the enunciation by the actors of the   language.   -Each playwright can create their own specific style in relationship to language   choices they use in establishing character and dialogue.  -Plays may be written in verse (POETRY) or prose (similar to everyday   speech).  -Verse was for many centuries the standard language of the theatre.  -Dialogue written in verse may have a rhythm, meter, or rhyme scheme.  -Prose was considered inartistic and unworthy of performance onstage.  -by the late 18th-early 19th centuries, prose had become the theatrical   standard for drama.  -Stage Dialogue: 1. Monologue: one character speaks for an extended period of time   without interruption 2. Soliloquy: character is alone onstage or if the other characters cannot   hear the words he is speaking 3. Aside: brief remark by a character meant to be heard by the audience   but not the other characters onstage.  -figurative language: often enriches dramatic dialogue 1. Metaphor: 2. Simile: comparison between 2 unlike thinks using “like” or “as” 3. hyperbole: exaggeration, overstatement. 5. Music  -may encompass the rhythm of dialogue and speeches in a play or can also   mean the aspects of the melody and music compositions as with musical   theatre.  -Music creates patterns and establishes tempo in theatre. 6. Spectacle   -The spectacle in the theatre can involve all of the aspects of scenery,   costumes, and special effects in a production.  -the visual elements in play that impact the eye: 1. scenery 2. costumes 3. props 4. lighting 5. actor physicality

what is wrong with the following statement: “an adaptation is a trait whose fitness benefits (b) exceed its costs (c).”