UGA / Plant Biology / PBIO 1210 / What is the term in the original belief of how genetics work?

Description: These notes cover the 3rd exam in plant biology. I have highlighted the names and terms that will be important for the test

a. States that an offspring is a blend of its parents

a. States that parents pass on heritable genetic units (genes)

b. This was discovered by Gregor Mendel by breeding and observing pea plants i. He removed the anthers of the plants so they couldn’t self-pollinate and applied  pollen from another plant to its stigma

iii. He made controlled crosses of different varieties

Who is the first to propose an evolutionary mechanism?

6. Allele is found on locus of chromosome

Who is charles darwin?

5. Test cross- an unknown can be crossed with a purebred to determine

whether it is homogenous or heterogeneous

If you want to learn more check out moodle utep 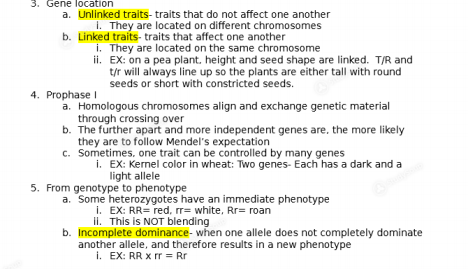 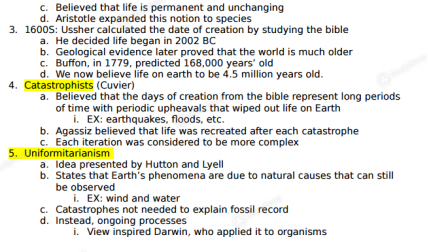 If you want to learn more check out using your own words, explain how third-party cookies are created.

a. First to propose evolutionary mechanism

b. Accepted chain of being

i. No new species form

d. He believed that there were two chains: Plants and animals

i. Some species don’t fit into a linear chain

f. He hypothesized that:

i. Traits emerge through use/disuse

iii. EX: Early giraffe stretches its neck to reach food and this is passed to its

a. Makes observations on the Galapagos Islands, such as snakes with hind legs and finches  with different beaks

i. EX: the finches’ beaks are adapted to different food sources

b. Phenotypes can be used to track environmental changes over time

i. Artificial selection can be used as evidence

ii. EX: People save plants that produce the most fruit and the allele for that trait  will be passed through the generations Don't forget about the age old question of chapter 6 accounting study guide

c. His book, The Origin of Species, explained that many species of organisms on earth are  descendants of their ancestors

i. Decent with modification (Evolution)

2. Natural selection is the main cause of evolutions

3. Theory- principle/conclusion derived from a large body of observations/experiments a. Every species is capable of producing offspring that cab survive/reproduce b. The sizes of natural populations tend to remain constant over time

i. This is typically governed by available resources

c. Thus, there will be competition for survival/reproduction

d. Individuals in a population vary affect their chance of survival/reproduction e. Individuals with the most advantageous traits are:

i. More likely to survive and produce the most offspring

ii. Favorable traits will become more common in a population over time

a. Protein/DNA sequences can be used to reconstruct species’ relationships

b. Closely related organisms are more similar on a DNA/protein level

c. Darwin believed that the history of life resembled a tree

i. Multiple branches from a common trunk

ii. The tips show the diversity of living organisms  Don't forget about the age old question of Who discovered that if you excite the brain with electricity it can cause motor function?

d. Gaps in the fossil record are being filled in slowly over time

1. Evolution- the change of allele frequencies in a population over time

a. Population- certain species in a particular area

b. Gene pool- all alleles present in a given population Don't forget about the age old question of an essential management tool that communicates

c. Genotype frequency- proportion of a population with a certain genotype

i. Not necessarily equal to phenotype frequencies

3. These factors can alter allele frequencies:

a. Mutation- any change in genetic material

i. Ultimate cause of all genetic variation

ii. Occurs randomly in replication/crossing over

c. Genetic drift- random changes in allele frequencies caused by a new allele i. What determines a mutations fate?

2. Fixation-Even if selection plays a role (and especially if it doesn’t)

a. (Organisms with lower fitness are less likely to survive and produce offspring) b. Abiotic- temperature, elevation, moisture, chemicals

a. (Individuals with one extreme phenotype are favored over ones with the other extreme) b. EX: for weedy plants on island, dispersal causes drowning

i. Decreased pappus and increased seed size is favored

c. Shift can happen quickly in less than a decade

e. Results in a fixation of the favored allele

a. (Favors individuals with intermediate phenotypes)

b. Results on the narrowing of phenotype distribution

d. EX: too few flowers causes less reproduction, too many is costly

b. Results I phenotypic divergence

a. (transfer of alleles from one organism to another through mating)