UMB / Communication / COMM 107 / What is receiving in listening process?

Description: Formatted similarly to the review sheet sent out by the professor

1. Listening is the process of attentively receiving a message and  combining it with perceptions and context to generate meaning

that results in a response either vocalized or internalized. 2. Hearing is the act of receiving sound and a component of

3. Listening combines many elements including hearing to generate

meaning that goes beyond the mere perception of hearing. 4. The listening process involves a speaker and listener(s). The

speaker sends a message that is received by the listener(s)  whose perception of the message is modified by their attention  to what was communicated. The listeners then assign meaning  to the message and respond. The response is then picked up by

the speaker as feedback.

What are the five stages in the process of listening?

5. Perception consists of taking the material received and analyzing it. This results in numerous filters being applied in order to  connect parts of the message to things that make sense with the remaining portions falling into place gradually. There is a natural  tendency to hear what one wants by attempting to match the  filtered portions of the message with what is desired rather than  objectively categorizing the information. Perception is different

6. Listening apprehension is the fear of misunderstanding,  inadequately processing, and/or not being able to adjust

psychologically to messages sent by others. This results in a  decrease ability to effectively listen because attention is diverted away from what is said and filtering attempts to place  information in a way that contradicts what the listener wants to  be true as they feel they cannot be correct in what they though  was said.

We also discuss several other topics like What is the function of the axonemal?

1. The interviewer is the one who dictates the flow of the interview  and is very responsible for what is gained from the interview.  They must have a plan for how the interview will go and be able  to adjust to unforeseen answers or lines of discussion that  present themselves while also staying on track. Most

2. The interviewee should know what they are being interviewed  about and what the interviewer wants to gain from the exchange. They should also be open to asking questions themselves and  not afraid to diverge somewhat into tangents if they will add to  the conversation. Most importantly, the interviewee must be

honest with their answers and ask for clarification if needed.  3. When planning an interview, deciding the overall goal is

paramount. By establishing the goals of the interview the  questions can be organized in a manner is that they are not

repetitive and they build upon each other to add more meaning  to the responses. Plans should also be made based on the  probable answers to questions that way it can flow as a  conversation not a test and also plans should be made for where  to go from unexpected answers so that the conversation doesn’t  die. Equally as important is informing the interviewee of these  goals so that they know how to prepare and can give the most  helpful answers rather than what they can come up with on the

spot. Don't forget about the age old question of What are some physical and chemical agents that cause mutations?

1. A group is a system characterized by interconnectedness of the  constituents. This is different from a mass of people because

they all share a goal that links them and unifies them. 2. Small groups and large groups each have advantages and  Don't forget about the age old question of Why is pareto efficiency important?
If you want to learn more check out What is tacit collusion in oligopoly?

disadvantages usually the opposite of each other. Small groups  arrive at decisions quickly while large groups take more time.  Large groups have a wide variety of ideas while small groups are

cause the reverse to be more true.

3. The main leadership styles can be described as inclusive,  exclusive, and augmenting. Inclusive leaderships are  characterized by having a large number of people decide upon  what should be done. Exclusive styles have a few or a single  person making the decisions for the group. Augmenting styles  have a central group that looks for input from others to make  more informed decisions so the entire group has a voice but the  decisions are made based on a smaller group’s analysis of that

4. The main advantage groups’ offer is an increase in the number of ideas. The more ideas that are circulating the more likely it is for  a correct solution to be proposed. Furthermore, having a group  debate and consider various ideas can be used to modify the  ideas or point out flaws that would lead to failure. Group working  also leads to increased risks taken and more creative solutions as ideas and their parts are combined. The main disadvantage to  groups is that decision-making takes a much longer time.  Additionally, the group can become so homogenous that no one We also discuss several other topics like What is the configuration of an electron?

a. Forming, where individuals come together to accomplish a

b. Norming, where procedures and rules are established and

group members feel each other out

c. Storming, where conflicts emerge within the group and are

either addressed or suppressed

d. Conforming, where people file in line with the rules

established and the conflicts of storming are overcome e. Performing, where the group actually takes action to

f. Adjourning, where the task is accomplished and the

members either stay together or go their separate ways 6. Agendas typically consist of a call to order, a recap of what was

previously discussed or accomplished, presentation of what has  been accomplished by the various participants, discussing what  still needs to be done, discussing what new things need to be  done, and adjournment. The issues and topics discussed should  be presented clearly and in a way that encourages discussion. Negotiations

1. Negotiation is the act of bargaining to reach an agreement with  at least two people or groups working on a mutual problem. The  results can be either win win, win lose, lose lose, win neutral,

2. The four main principles of negotiation are to prepare in  advance, reframe questions and arguments, respond rather than

react, and identify and alter tactics. It is also best to go into the  negotiation seeking a win-win result that way both sides can be  satisfied and work towards the goal. Trading is also a good way  to get a resolution.

1. Conflict is any situation in which one perceives that another  person is frustrating or might frustrate the satisfaction of some

a. Goals, when someone wants someone else to do

something in a way they disagree with to accomplish the

b. Allocation of Resources, when there is a limitation of a  specific resources and someone wants someone else to use

their resources for a different goal or in a different way. c. Decision Making, when people done agree or unwilling to

change what they think should be done.

d. Behaviors, when someone takes offense at what someone  else does. 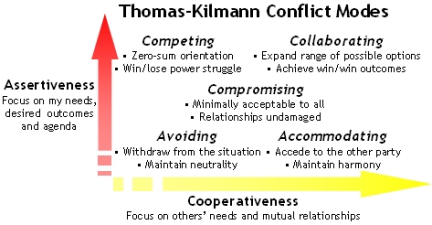 What is the meaning of conducting zone in the respiratory system?

What does null mean in a hypothesis test?