Cognition: mental activities that include thinking and understanding.

Thinking: The mental manipulation of representations.

There are 2 ways to how we can get representations:

Analogical representations: contain the physical characteristics of a physical object.

Symbolic representations: are going to be actual symbols instead of physical characteristics.

∙ Concepts are symbolic representations. They can break into categories which is really helpful because  categories minimize the amount of information that’s needed to be stored in memory.  Reduces length of  the lists

There are two ways we form concepts:

1. Exemplar model: this is where all the members are classified as the examples.

a. Dogs and cats

2. Prototype model: There is a great example within that category. Applying to one. a. Apples and oranges

So the question may be: How do we use models and representations?

o Scripts are a type of schema( which are structures that help process information). Scripts are  associated with a highly familiar activity.

There are two ways that we make decisions:

SHOULD get paid for more for doing this job.”

How should you reduce outgroup biases?

 Relying on the first piece of information when making decisions.

 Focusing on the pros OR cons on at least ONE alternative.  We also discuss several other topics like What is mark twain known for?

Restructuring: Another solution that made be thought of in a problem

Mental sets: solutions to a problem that have worked in the past

Morphemes: think suffixes and prefixes because that are the “smallest amount of languages that have meaning”. I  would even say that you can think abbreviations.

Phenoemes: sounds that can form into words.

Syntax: rules that determine how words make up phrases and phrases make up words.  Section 8.3

a. I would think the word “Wernicke” is a crazy looking word. Personally, I have trouble

understanding what the world it could mean. Hopefully, that will help.

3. Global aphasia: combo of both Broca’s expressive and Wernicke’s receptive aphasia. a. Meaning you can’t produce proper speech or understand meaning of words.

∙ Infants don’t think anything complex or mature, right? Well this makes sense because when kids start  talking you see that they start thinking more complex…it only gets more complex as you get older.  Don't forget about the age old question of How many moles in 4 g of hydrogen ?

Spoken and written languare are DIFFERENT! Spoken is built in and progresses. Written language is learned.

∙ Think about it like this: You are learning as you read my written notes right?

 Crystallized intelligence: intelligence that reflects knowledge acquired through experience and ability to  use that knowledge.

Psychologists argue that there are multiple intelligences

--Analytical: such as the ability to analyze, compare, evaluate, critique, and judge.

"Judging or comparing some thing or things”

-- Emotional: according to Wikipedia// the capacity of individuals to recognize their own, and other people's emotions, to  discriminate between different feelings and label them appropriately, and to use emotional information to guide thinking and  behavior. We also discuss several other topics like What are the indefinite articles?
Don't forget about the age old question of What is systematic discovery?

Blacks tend to score lower on IQ tests than whites and the reason is unclear. However, it is attributed to stereotype threat: KNOW  WHAT This is: describes the experience of “being at risk of confirming, as self­characteristic, a negative stereotype of one’s group.  This social­psychological phenomenon has been shown to significantly decrease the performance of persons who belong to  negatively stereotyped groups.

∙ Feeling based on the situation

Two factor theory of emotion: arousal is the result of an emotion

People can misidentify their source of their arousal: We have physical changes associated with an emotion(such as  working out at a gym) to an incorrect cognitive appraisal, seeing the person which results in being attracted to the  person. This is MISATTRIBUTION OF AROUSAL.

Affect-as-information- theory: When you allow your emotions to make your decisions.

 The face expressions communicates and these communications are understandable by all people. -Darwin. Remember this chart Don't forget about the age old question of What is an amphipathic molecule? 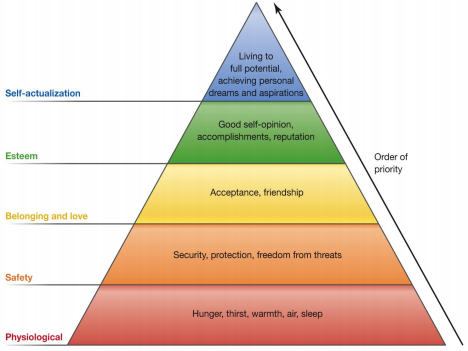 Yerkes-Dodsen law: performance increases to a moderate level with arousal.

Have more androgens then females Have more estrogen than males  What’s released during sexual arousal and orgasm? Well that will be that hormone called Oxytocin. 10.5

Sexual scripts are beliefs about how a sexual episode should be done. Any time where the script isn’t followed…it  causes us to feel uncomfortable.

Outgroup homogeneity: seeing the people outside a particular group as not good enough.

Social identity theory: group members perceive themselves to be of the same category.

You can have some problems with groups

 Deindividualation: pretty much becoming less independent and less like yourself when apart of your group.  Risky-shift effect: as a group, decisions made are a lot riskier than being on your own  Groupthink: Groups making BAD decisions because under pressure.

 Social loafing: not gonna work as hard while in a group because youre not forced to have to do the task

 Foot In the Door Affect: pretty much you keep asking for more and more because you got what you wanted

for the small request.

 Door in the face effect: Manipulation lol // Basically when you ask a big request, person says no, so you ask what you want that is a smaller request.

So what things can influence aggression:

Prosocial behaviors- any time you want to be “pro social” and help someone. Usually for the reasons of empathy,  selfishness, or just an inborn tendency to help.

How should you reduce outgroup biases?

 Making two opponents participate with one another forming a bond. Look in the book for the methods.  (Sorry. I don’t have my book with me right now).

Mere Exposure Effect: MS. BLISS’ FAVORITE EFFECT—this is where you start liking something because you become  more and more exposed to it.

∙ I used to hate broccoli, my parents would tell me to eat a couple bites when I was a kid, now I love  broccoli. See? I was exposed.

– Explicit Attitudes: attitudes that a person can report. What’s being seen.

o Implicit Attitudes: attitudes that influence a person’s feelings and behavior at an unconscious  level. Like what’s happening in the inside.

What’s cognitive dissonance? Uncomfortable mental state. Contradiction between two attitudes OR a contradiction  between an attitude and a behavior.

Peripheral: not motivated/ not able to process information

Subtyping: Throwing someone into their own stereotype.

Proximity and familiarity are the most important factors for forming a relationship: more you come into contact with  someone…plus people like familiar things.

• People similar in attitudes, values, interests, backgrounds, and personalities tend to like each other. Matching principle: the most successful romantic couples also tend to be the most physically similar.

• Happy couples also differ from unhappy couples in attributional style, or how one partner  explains the other’s behavior.

– Ultimately the most important component to a lasting happy relationship is validating  each other’s needs and feelings.

• How to break problems with groups.

• Analogy for IQ tests used in class regarding animals.

• How attitudes can affect motivation and goal setting.

• Differences in motivation for sex between men and women.

• Something about Maslow’s Hierarchy of needs.

Where did the idea of where the world first started come from?

What is telencephalon and diencephalon?