TOWSON / Biology / BIOL 309 / Can mutations in sex cells be inherited?

Description: This study guide is in depth and based on the study guide provided by Professor Bulmer as well as information from his Power Points.

o Point Mutation: Only affects one or very few nucleotides, typically changes  one nucleotide for another

o Frameshift Mutation: Changes the “frame” in which the template strand is  read. Is caused by Indels (Insertions or deletions) of a pair of nucleotides o Therefore, the differences between the two are that point mutations only  affect one nucleotide and frameshift mutations affect more than one

nucleotide and how the entire code is read.

o Somatic Mutations: Mutation in a non-germline cell that can be passed to  the progeny through cell division

What are some physical and chemical agents that cause mutations?

o Therefore, the primary difference between the two is the cells in which they  occur

o Spontaneous: Occurs without a known cause

o Induced: Mutation that occurs due to exposure to a chemical or physical  agent that causes changes in the structure of DNA

o Transversion: Changes a Purine to a Pyrimidine or vice versa

Which system of testing would be best for testing chemicals as mutagens?

o Base analog: Unnatural purine or pyrimidine bases that differ slightly from  the normal bases and that can be incorporated into nucleic acids

∙ Changes the charge distribution and increases the frequency of

∙ In stable Keto form in bonds with adenine

∙ In enol form it causes an A: T ???? G:C transition Don't forget about the age old question of Why is pareto efficiency important?

∙ Used for medical diagnoses and penetrate living tissue through

∙ Can cause mutation

∙ Do not cause ionization but excitation or the movement of electrons in  outer orbitals to higher energy levels  We also discuss several other topics like What is tacit collusion in oligopoly?

∙ More likely to cause mutation in single cellular organisms

o These mutations can cause cancer

o Carcinogens: Mutagenic substances that induce cancer in living cells  o It essentially provides a simple and inexpensive method for detecting the  mutagenicity of chemicals  We also discuss several other topics like What is the configuration of an electron?

o Step 1: Grow Salmonella his auxotroph’s carrying a frameshift mutation  o Step 2: Prepare a solution of the potential mutagen  We also discuss several other topics like What is the meaning of respiratory epithelium in the respiratory system?

o Step 3: Spread bacteria on agar medium containing a trace of histidine (plates  skips steps 4 and 5 acting as the control)

o Step 6: Incubate at 37degrees Celsius Don't forget about the age old question of What are the steps for a hypothesis test?

∙ Step 1: DNA repair endonuclease or endonuclease-containing enzyme  complex recognizes, binds to, and excises the damaged base or bases  in DNA

∙ Step 2: DNA polymerase fills in the gap by using the undamaged  complementary strand of DNA as template

∙ Can be initiated by a group of enzymes call DNA glycosylases

that recognize abnormal bases in DNA

∙ They then cleave the glyosidic bond between the abnormal

base and 2-Deoxyribose creating AP sites (apurinic or

∙ AP sites are recognized by endonucleases which act with

phosphodiesterase to excise the sugar-phosphate groups at

∙ DNA polymerase replaces the missing nucleotide per the

specifications of the complementary strand

o Requires the product of uvrA, uvrB, and uvrC

recognizes the defect damaged site and binds to it

using ATP to bend the DNA at the site of damage.

o UvrA dimer is then released and the UvrC protein bind

from the damaged 5’ side

o DNA ligase seals the remaining nick in the DNA

∙ Requires the products of mutH, mutS, and mutU (Also uvrD) ∙ MutS protein recognizes mismatches and binds to them to  initiate the repair process

∙ If the incision occurs at the 5’ then a 5’???? 3’ exonuclease  activity (Exonuclease Vii) is needed

∙ After the mismatched nucleotide, has been removed from the

gap and mediates it pairing with the homologous

segment of the sister double helix

∙ Gap in sister Segment is filled by DNA polymerase and sealed

∙ Thymine dimer stays in template strand but the

Chapter 14—Definitions of the Gene

o Every gene codes for one and only one enzyme, had to be modified though  and turned into one gene one polypeptide

o Determine whether two mutations associated with a specific phenotype represent two different forms of the same gene (alleles) or are variations of  two different genes.

o The complementation test is relevant for recessive traits (traits normally not  present in the phenotype due to masking by a dominant allele).

▪ Tryptophan binds to the repressor

Repressor/Tryptophan binds to operator and expression is turned OFF  ▪ Translation of a small peptide STOPS transcription unless Trp is not  available to complete the peptide. 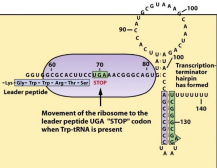 o Regulate gene expression by interacting with the promoter 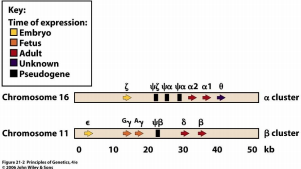 o Duplication can happen because of recombination errors, DNA replication errors,  transposition, and viral integrations into the genome

o Steroids can move through the cell membrane

o Binds to response elements in the promoter region

▪ Juvenile Hormone: Transition to foraging influenced by level of

∙ When nurse honeybees do not encounter a satisfactory number

of foragers they transition to foraging (Inhibited by the

pheromone ethyl oleate which is transferred by foragers when

they give food to the nurses

∙ Steroids can move directly through the cell membrane.

in the promoter region.

∙ Activates a signal cascade in the cytoplasm

o Acetylation of histones results in loosening of the

o Incorrect modifications of histones has recently been

∙ Gene amplification is an increase in the number of DNA

rRNA genes are amplified by the creation of

extrachromosomal copies of the genes to allow increased gene  expression. The 5S rRNA genes are present in thousands of

copies on the chromosomes (gene dosage).

∙ ER can be far from promoter

∙ ER can be inverted

∙ ER can be upstream or downstream from promoter (different  chromosome)

∙ RNA interference in the lab

o Injected or transfected into cells

o One inside knocks out or knocks down gene expression.

∙ Definition and characteristics of a cancer cell

o Formation of masses in cell culture instead of a monolayer

o Checkpoints between the different phases of the cell cycle (G1, S, G2 and  M).

∙ Cyclins complex with CDKs enabling them to be active (regulate

activity of other proteins through phosphorylation- addition of a

∙ Concentration of cyclins determines whether cell moves into different  stages of the cell cycle.

∙ When low, the cyclin detaches from the CDK, inhibiting the

∙ If complex disrupted (by proteins that prevent complex forming) will  remain in G1.

∙ Reasons for remaining in G1:

∙ DNA damage -wait for repair (cancer cells do not wait for

∙ Mutations in genes encoding the proteins that respond to

∙ All cancers have their basis in genetic defects (either inherited or  acquired somatically during a person’s lifetime).

∙ Epigenetic switches that turn key genes on or off

∙ v-jun is a transcription factor

∙ v-erbB is a receptor for a growth factor (EGF receptor)

∙ Viruses appear to have picked up cellular genes without introns. ∙ c-onc genes that were adjacent to the integrated virus

∙ When they are defective they fail to repress cell division

What is the correct order of events at the neuromuscular junction?

What is it called when water vapor exit plant stomata?