Description: Sorry for the very late post, but here is what you should study for the upcoming exam. It accumulative so anything before this counts as well.

o Orbital: A 3-d region where electrons can be found.

o Elements in the same group have the same number of valence electrons. o Valence electrons: Electrons on the outermost of the atom (valence shell),  that are eligible for bonding.

o The number of groups in a block determine how many max electrons the  level can have.

What is the shorthand for electron configuration?

Example: Na has 11 electrons. What is the full electron configuration? Don't forget about the age old question of What is the meaning of conducting zone in the respiratory system?

o You should always fill the level completely before moving on the next. If a  level is not completely filled at the end, that is ok.

What is the electron configuration for ions?

o This is because Ar has 18 electrons and is able to represent the first 18 in Br.

∙ For positive ions, you will remove electrons.

∙ For negative ions, you will add electrons. Don't forget about the age old question of What does null mean in a hypothesis test?

∙ Ions the have the same number of electrons as another element, means that the two  are isoelectronic.

o The + represents the charge is now +1, so you will have to remove electrons. o Na = 11 electrons 11-1=10, so Na+has 10 electrons. If you want to learn more check out Where are alpha motor neurons located?

o This means that Na+and Ne are isoelectronic. Don't forget about the age old question of What is it called when water vapor exit plant stomata?

∙ Nonpolar covalent: Bond between two non-metals that have the same  electronegativity and have equal sharing of electrons.

∙ Electronegativity: How willing an atom is to accept a pair of electrons.

∙ This is a representation of the bond between atoms/molecules.

∙ Octet rule: Valence shell can only contain 8 electrons and will maintain these 8 by  bonding with other atoms. When constructing a Lewis dot diagram, only 8  electrons are allowed to be represented per element.

∙ Molecular mass: Sum of all atomic mass' of each element in a covalently bonded  compound. We also discuss several other topics like What is the second stage of sleep?

∙ Formula mass: Sum of all atomic mass' of each element in an ionically bonded  compound.

o Because H has a subscript of 2, you multiply it's atomic mass by two.  (Because there are two atoms of this element) Because O has no subscript,  therefore only being one atom, it's atomic mass is multiplied by one.

∙ Percentage of mass in each element of a compound.

∙ You can simply change the amount in g to a percent by multiplying by 100. ∙ Example:

∙ Instead of dividing by the sample amount, you divide by the formula mass.

o Divide all by lowest outcome

o So the final answer will come out as Fe2O3

o Identify what the question is asking for.

o Organize what is given. 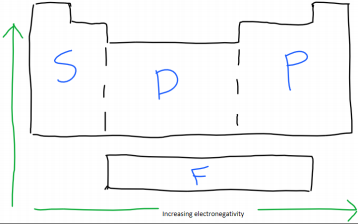 This chart shows sublevel blocks and electronegativity on the periodic table.

What happens if the nuclear lamina is destroyed?

Give an example of the outgroup homogeneity effect.