VIRGINIA TECH / Economics / ECON 103 / What is the ratchet effect in macroeconomics?

Description: This study guide covers the topics that Mike stated would be on exam 3.

∙ Ratchet effect: (democratic thinking) once prices go up, they never go down o Ratchet: works only in one direction

o Due to ratchet effect, what takes a hit in a recession?  output  (income, jobs, etc.)

o Always a tradeoff between solving inflation vs solving unemployment  o Was he right? – NO, only true in joint range

o If you solve one, you exacerbate the other 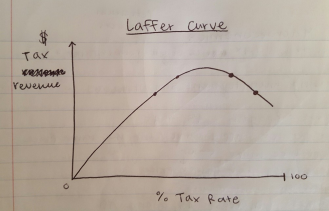 ∙ At what point would tax rates be so high that people don’t work? – top of the  hump

∙ Of the 44 presidents, 43 have focused economic policies on manipulating the  We also discuss several other topics like How did the bus boycott create a mass movement for change?

What are the roles of money?

∙ Fiscal policy = the taxing and spending powers of government If you want to learn more check out aaron childs mcmaster
We also discuss several other topics like what system of long distance communication that connected all the intellectuals of the west? 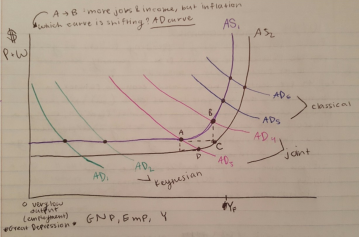 If you want to learn more check out arth 72 sjsu

∙ 5 roles of money (what does money do?)

o 4. Social invention: human idea; money only works if there is

confidence in it; man-made object We also discuss several other topics like What is iconography?

o 5. Convertibility: until 1971, all money was convertible; prior to 1971,  anyone could go to the bank and give money in exchange for gold or

o *TEST: Each level includes all prior levels (up to M-14)

o Banks don’t HAVE to loan out bank money

∙ If the fed buys bond, money is pumped into economy

∙ If the fed buys a bond, money is taken out of nation’s reserve and put into  economy

o 2. Discount Rate: rate of interest charged by the fed on large loans to

o Most commonly used tool by the fed

∙ Why would the fed buy a bond? – mechanism for the fed to pump money into  the economy or withdraw it

∙ *TEST: When the first purchaser buys a bond, does it increase the nation’s

∙ If the fed buys that bond, money is taken out of nation’s reserve and put into

∙ The fed buys and sells bonds all the time

o The Fed DOES NOT issue bonds

∙ Why would the fed buy bonds? – if inflation was low

∙ If inflation is high, the fed will sell bonds it purchased in the past Monetary Policy (5)

∙ Most powerful man (woman) in America: Chair of the Federal Reserve = Janet

∙ Functions of the Fed:

o Each fed bank manages banks in 4 to 5 states

o Banks don’t HAVE to loan out bank money

∙ William Greider: Secrets of the Temple: How the Federal Reserve Runs the

o 800 page argument on how the Federal Reserve manipulates the

What is a balance sheet used for?