Description: The study guide for the upcoming midterm

∙ The octet rule states that atoms in compounds should have 8 valence electrons.  o This rule is important when drawing Lewis structures because it is the basic principle of  Lewis structures

∙ Some expectations are ClO2 , NO , & NO2which had an odd number of

Why are period 3 elements exceed an octet?

∙ Some atoms with lower than an octet are Be, B, and Al

∙ For transition metals, the group restarts at the beginning of the period being 3B for most  periodic tables. Once the section is done. It continues with the first period of nonmetals o Transition metals also have a special way of writing electron configuration. For example  Ti = 4s23d2, Ti+2 = 3d2, and Ti+4 = [Ar] . These electron configurations happen because the  lowest energy electrons are removed first so that it can get closer to a Nobel gas  configuration as show with Ti+4.

How many valence electrons are in the pyridinium ion?

When drawing a Lewis structure, it may be necessary to use either a single, double, or triple bond.  If you want to learn more check out At what time period does adolescence take place?

∙ The stronger the bond, the shorter it becomes due to the increase in attractive forces between the atoms nucleus’

o Strength = triple > double > single If you want to learn more check out Which group is most impacted by regressive taxes?

When a compound has more than one Lewis structure, that is referred to as a resonance structure

∙ Can be seen with NO3-where the double bond switched places with each of the oxygens.  ∙ To determine the correct structure, the formal charge of the entire molecule must be closest to  zero with the most EN atom having the most negative number

∙ Def: the amount of energy used to pull electrons from an atom as well as the stability og an  ionic substance Don't forget about the age old question of What is m and n in a matrix?

1. Charge: the higher the change means more protons so it will be harder to pull electrons  from the atom

▪ Remember: atomic radius increases down and to the right of a periodic talk  2. Size (tie breaker): the smaller, the more energy it takes to pull electrons rom the atom ∙ Can be represented using a Born Haber cycle

3. The amount on the left should equal the right, so you can solve for whatever step by  setting each side to itself If you want to learn more check out What is mogadishu famous for?

Electronegativity(EN): relative ability for an atom to attract electrons to itself

o A bond is polar if there is a huge dipole moment between the atoms.

▪ Remember: EN increase as we go up a table and from left to right.

Therefore, Fluorine is the most electronegative

▪ Definition: the enthalpy required to break one mole of a particular substance in the gaseous state

▪ This is determined by drawing out the molecule and looking at which bonds it has, then  using those bonds to get the bond enthalpy number. Then use the formula: (Summation  of bonds broken) – (summation of bonds formed). Be sure to take into account the  coefficients for each atom Don't forget about the age old question of What are the three waves of globalization?

o Not to be confused with Hess’s Law where it is reactants minus products, it is  actually the opposite in this case.

o The larger the bond enthalpy, the stronger the bond due to the atoms being closer  together so a harder time breaking the bond]

Electron domains are used to predict the electron and molecular geometry of a molecule. This can be  done in the following number of steps:

3. Use the following table to determine ED and molecular geometry using the amount of electron  domains 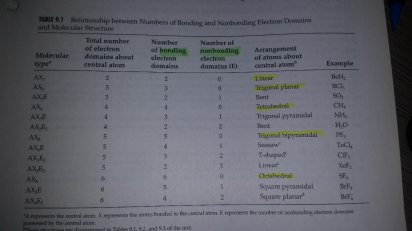 ▪ This picture was obtained from Student Guide for Chemistry by James C. Hill, 12th edition.  The table looks a bit confusing but there’s a trick to understanding it all:

1. The molecular bonding is:

The electron geometry is what happens when the molecular geometry is changed due to the addition of  nonbonding pairs:

a. The pattern is that the NB and B equal up to the molecular geometry and as you remove  EDs, it becomes easier to picture

∙ Hybridization is how molecules arrange itself in the lowest energy form and Is based on the  amount of electron domains; formed from the overlap of linear compound orbitals  o A tip: to determine hybridization, count the amount of bonding domains and that  corresponding number to the spppdddd in order to obtain hybridization. For example, a  molecule with four Electron domains would have a sp3 hybridization.

▪ The formation for 2 s orbitals, an s and p orbital or p orbitals situated on the internuclear axis

▪ Stronger than a sigma bond

▪ The overlap of p bonds causes a delocalized bond

▪ There are two different kinds of MO energy diagrams. After the second row, the sigma 2p  orbital is lower

o Bonding MO has electron density between two nuclei; can be thought of as sigma  bonding

Bond order is the net number of bonding electrons

Gases have a particular set of properties:

a. They expand to fill the container they are in: no definite shape

b. They are compressible

Some instruments to measure pressure are;

▪ A manometer is used to measure the difference in height with the mercury, It is usually less than  atmospheric pressure as it is done inside a closed container

There are certain units of gas as well:

▪ Pressure (In either atm, torr, pascals…)

All these equations lead to one overall equation called the ideal law equation:

Mole fraction: the ratio of moles in a component over the total moles of mixture

▪ If kinetic speed changes so, does average speed

What is learned through conditioned principles?

What is the role of agenda-setting theory?