○ Who is more able to pay those bribes?

● How do the effects depend on whether the tax is imposed on buyers or sellers?

● How do taxes affect market outcomes? 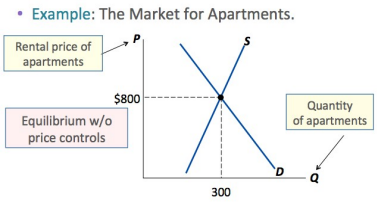 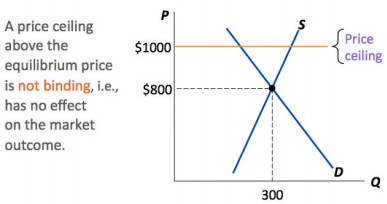 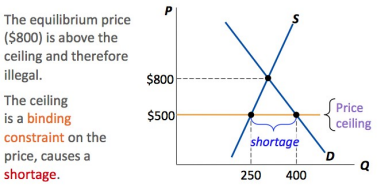 Over time, supply and demand are more price elastic; the curves start to flatten out: shortage  gets larger Price ceilings that involve a maximum price below the market price create five important  effects 1. Shortages 2. Reduction in product quality a. When we are at a low price ceiling (below equilibrium), there is no  incentive to provide better quality 3. Wasteful lines and other costs of search 4. Loss of gains from trade 5. Misallocation of resources1. Shortages ● Created when prices are held below the market price ● Shortage = difference between the QD and the QS at the controlled price. ● The lower the controlled price relative to the market equilibrium price, the larger the  shortage. ● Example: A shortage of vinyl in 1973 forced Capitol Records to melt down slow sellers so they could keep pressing Beatles’ albums. 2. Reduction of Product Quality ● At the controlled price, sellers have more customers than goods = surplus ○ In a free market, this would be an opportunity to profit by raising prices ○ But when prices are controlled, sellers cannot ● Sellers respond to this problem in two ways: (since price cannot be changed) ○ Reduce quality. ○ Reduce service. 3. Wasteful Lines and Other Costs of Search ● Shortages = not all buyers will be able to purchase the good ● Normally, buyers would compete with each other by offering a higher price ● Price ceiling → price not allowed to rise → buyers must compete in other ways  ○ Bribes ○ Waiting in long lines ○ Black market ● Opportunity cost: if you COULD attach a price to this ○ i.e. apt (shortage, getting worse) – there’s a cost attached to this, not  necessarily money ○ Shortage of gas ■ Long lines at gas stations  ■ Waste of time ● Bribes ○ Some buyers may be willing to bribe sellers in order to obtain the good. ○ The highest bribe a buyer would pay is the difference between his  (her) max price and the price ceiling. ○ If bribes are common, then the total price of the good is the legal price  plus the bribe. ○ From market’s perspective, if someone bribes attendant, someone gets  something out of it (money) ■ If you’re waiting in line, there’s frustration and other  consequences – more waste, opportunity cost ■ Basically: bribes are a way for customers to deal with  other losses, other than their own money ○ Bribes are inevitable ○ Who is more able to pay those bribes? Competing with others that can  give higher bribes? ■ Those who can actually afford them ■ Helping those who have more money… ● Wasteful Lines○ Buyers can also compete with each other through their willingness to  wait in line ○ The maximum wait time (translated into monetary terms) for a buyer is  the difference between the max price and the price ceiling ○ So the total price of the good is the legal price plus the time costs ○ Surplus relative to where the price level is ○ Market’s perspective: Impose brand new price ceiling ● BASICALLY: Bribes and waits both lead to a total price that is greater than the  controlled price, (but they are different.) ○ Bribes involve a simple transfer from buyers to sellers. ○ The time spent waiting in line, however, is simply lost – paying in time is  much more wasteful. ● Total value of the wasted time = time cost per unit x quantity bought (below) 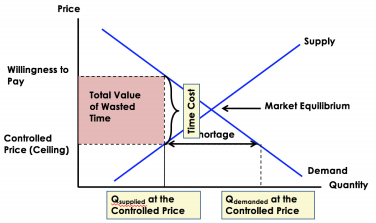 4. Lost Gains from Trade ● Price controls → reduce the gains from trade. ● Price ceilings set below the market price → QS less than the market Q. ● Q is below the equilibrium market Q → consumers value the good more than  the cost of its production. ● This represents a gain from trade that would be exploited (if the market were free). ○ Market has a way to restore equilibrium ● Deadweight Loss: ○ Deadweight Loss is the total of lost consumer and producer surplus  when all mutually profitable gains from trade are not exploited. ○ Price ceilings create a deadweight loss by forcing Qs below the market  Q. ■ Buyers and sellers would both benefit from trade at a  higher price, but cannot since it is illegal for price to rise. 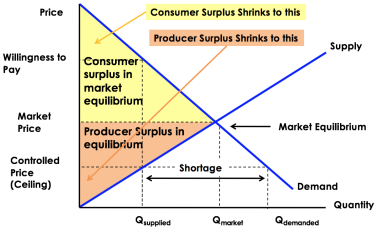 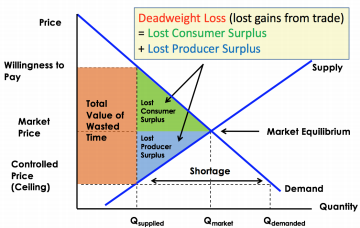 ● At quantities between Qsupplied and Qmarket, the willingness to pay is greater than the cost of  production.   ● Although mutually profitable, these trades are illegal.  If all mutually profitable trades were legal, the gains from trade would increase by the green plus blue triangles. ● The lost gains from trade represent a deadweight loss. 5. Misallocation of Resources● Price controls distort signals and eliminate incentives ­ leading to a misallocation of  resources. ● Consumers who value a good most are prevented from signaling their preference (by  offering sellers a higher price.) ○ So producers have no incentive to supply the good to the “right” people  first. ○ As a result, goods are misallocated. ○ If producers supply to people who give higher bribes, they aren’t  necessarily the right people; they are people who can afford to do that. 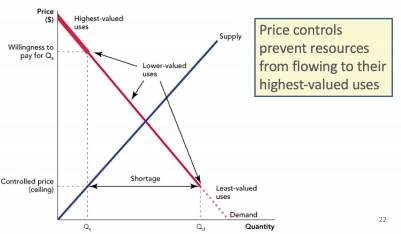 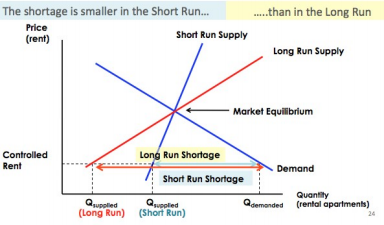 Q: So why do price controls ever get passed? A: The general public may not understand the nasty side­effects of price controls. ● Shortages may benefit the ruling elite… ● In the former USSR, the communist party elite used Blat to obtain goods. ○ Blat ­ having connections that can be used to get favors. ● The party elite can use their connections and power to obtain goods for themselves or  others. ● Without such leverage their power dissipates.  Price Floors Define Price Floor ­ A minimum price allowed by law. They’re not as common as price ceilings (but still  important) Price floors have four common effects: 1. Surpluses 2. Lost gains from trade (deadweight loss) 3. Wasteful increases in quality 4. A misallocation of resources ● Price ceiling prevents prices from going up ● Price floors prevent prices from going down (minimum wage) ● If buyers want a particular good, they compete with price ● Sellers compete for customers by offering lower pricesLabor 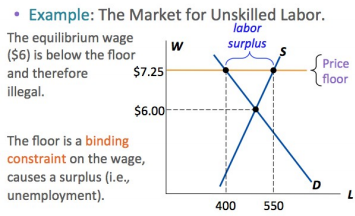 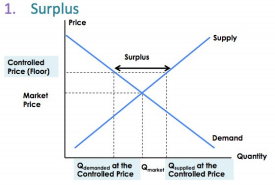 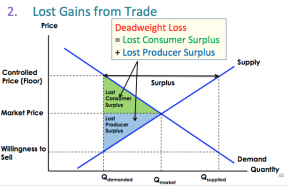 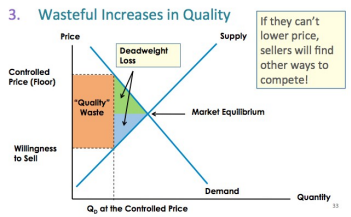 Higher quality raises costs and reduces seller profit. ● Buyers get higher quality, but would prefer a lower price. ● Price floors encourage sellers to waste resources: higher quality than buyers are willing  to pay for ○ Example: I want the basic car without all these fancy features (GPS,  Bluetooth stuff, etc. but in order to buy it, I need to spend so much more than I want to in  order to get the car) 4. Misallocation of Resources ● Price controls misallocate resources by: ○ Allowing high­cost firms to operate. ○ Preventing low­cost firms from entering the industry.○ Example: Southwest Airlines ■ Point A to Point B as cheap as possible ■ Low cost producers shouldn’t be entering the market Example: President Jimmy Carter deregulated the price floors in much of the trucking industry. Trucks carry almost  all of the consumer goods that you purchase, so almost every time you purchase something, you're  paying money to a trucking company. What do you think happened in the trucking industry after  deregulation? A. The price of trucking services fell. B. Truckers earned less money. C. Consumers saved a lot of money. D. All of the above are correct. Example:  If the U.S. government sets a price floor on milk, it will not always lead to a surplus. Why not? A. The price floor would be rarely enforced B. Because price floors most commonly lead to shortages, not surpluses. C. The market price of milk will sometimes rise above the price floor, rendering the price  floor irrelevant ­ because it says nothing about binding, otherwise prices could fluctuate D. Price floors cause supply and demand to change, which leads to changes in equilibrium  price. Taxes The government levies taxes on many goods & services to raise revenue to pay for national defense,  public schools, etc. ● The government can make buyers or sellers pay the tax. ● The tax can be a % of the good’s price, or a specific amount for each unit sold.  ○ For simplicity, we analyze per­unit taxes only.  Commodity Taxes Define Commodity Tax  ­ A tax on goods. Some truths about commodity taxation: ● Who pays the tax does not depend on who writes the check to the government; ● Who pays the tax does depend on the relative elasticities of demand and supply; ● Commodity taxation raises revenue and creates lost gains from trade (deadweight loss) ○ When you’re taxing, it depends on the relative elasticities – depends on  which side of the market is less elastic, and what happens to tax revenue 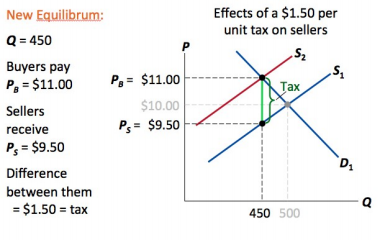 Who is getting more hurt because of the tax? ● Seller loses 50 cents ● Buyers spend $1 more, so they are more hurt, even if sellers are taxed too. ● These are relative elasticities ● Once curve is affected, the shift makes the tax split between the buyer and seller based  on new equilibrium 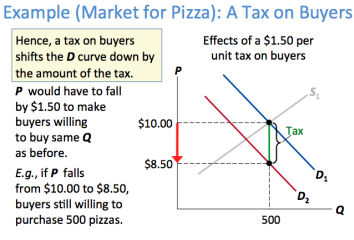 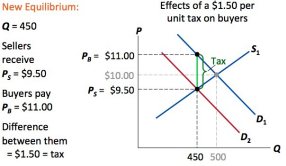